Today was the last of our artisan visits and this one was interesting in that most of what I saw today was centered around expression through inanimate objects. We met with Tatsushige-san who is another generation of Noh performers within his family (I can’t remember if he is second or third), but he’s really good at what he does essentially. His father creates Noh masks and the whole family is involved in so much of the performance of Noh. Ig’s good to see a family bond over a similar passion and after watching Tatsushige-san today, I would be a proud dad because just watching him perform even bits and pieces of Noh to explain movements and things to us was enthralling.

Anywho, back to the inanimate objects. The masks in Noh, or nohmen are made from wood, animal glue and covered with paints that are not fixed with paints that do not have sealants. The sealants preserve the integrity of the mask itself and its purpose, but they are highly susceptible to water and water damage. That makes the treatment of the masks special because you also don’t want to have an actor’s sweat or the usage of the mask wearing it down too much.

Also, Tatsushige-san showed us some of the Noh costumes that were used for some female characters and explained a little about kaki-ori weaving versus embroidery. For me, that was a huge exhale like: “yes finally I can hear about noh costumes.” I had an interest in them from the start of my research on textiles, but after learning that Tatsumura Textile Co. has a few different divisions that work on different products and that the main section we visited didn’t really do that, I was curious about the process that puts noh costumes together. The weaves on both of these pieces were so intricate that I didn’t want to touch them. They were both also woven with gold and I could have very well snagged one thread that meant my whole college tuition to replace. I think I just looking at the detail on kimono, obi, nohzoku, and other woven pieces now that I got a glimpse at the work behind them. For my own clothes I never really cared if a thread was lose or whatever because you usually hear about the mass production of western clothes almost being done by machines with little thought about uniqueness or embroidery. With these pieces I almost want to look more into clothing in general and the production of say, a haute couture piece for example.

In the end, Tatsushige-san showed us the importance of the more stiff movements within Noh, especially when it comes to actors wearing masks. Even the slightest tilt of the head can change the shadows that fall on the face of the mask and therefore change the expression of the mask. So in order to keep close to a character’s portrayal, actors need to be very careful about what they do and how they do it. It takes a lot of training of the body to participate in the portrayal of very complex characters who may or may not move their stances/faces much. Noh takes discipline, it takes skill and it takes the understanding of every component right down to the reasoning for why the eye-holes are so small in order to be a master at such a craft. 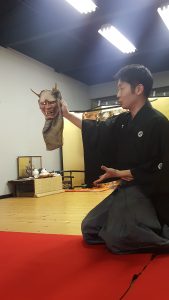 This entry was posted in kyoto and tagged noh, noh-costume, noh-mask, textile. Bookmark the permalink.