Horvat Omrit is a Roman-era sanctuary site located in the foothills of Mt. Hermon, just south of the modern Israeli border with Lebanon. Omrit stands near the crossroads of the ancient highway system, which linked important urban centers such as Scythopolis and Tyre to the Roman provincial capital of Damascus. During Hellenistic and Roman times, Omrit was part of an unruly region, famous for banditry, known as Iturea (Strabo Geo. 16.2, 18). The population of this mountainous region was primarily composed of Greek-speaking pagans, whose culture was most closely aligned with the cities of Syria and Phoenicia. There was also a significant population of Jews living in Iturea, many of whom, according to Josephus (Ant. 13.9), had been forcibly converted to Judaism during the rule of the Hasmonean king, Alexander Jannaeus (103-76 BCE).

Following the battle of Actium in 31 BCE, the emperor Augustus ceded control of Iturea to Herod the Great and tasked him with restoring order to the unruly region. Herod crushed all military opposition with his typical ruthless efficiency and then initiated an audacious building program designed to win over the people of Iturea (Josephus Ant. 15.344). Among the sites that benefited from Herod’s largesse was Horvat Omrit. During the early first century CE, Herod constructed a lavish sanctuary complex at Omrit, which was likely dedicated to the worship of the Roman emperor, Augustus. This sanctuary was expanded several times over the course of first century CE and remained in use until 363 CE, when it was destroyed in an earthquake. A small Christian chapel was later erected on the spot of the Herodian sanctuary using blocks from collapsed Roman buildings. The Christian community that built this chapel continued to thrive at Omrit until a second major earthquake destroyed the site in the mid-eighth century CE. 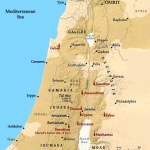 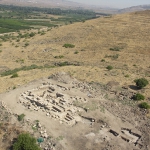 Aerial photo of the site looking NW, the temple complex in the foreground 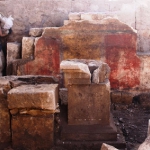 Professor Overman works to preserve frescoes on the inner temenos wall of the Early Shrine. 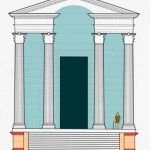 Reconstructed elevation drawing of Temple I, courtesy of Michael Nelson

Israeli and American archaeologists rediscovered Horvat Omrit in 1998 after a brush fire cleared away the vegetation, revealing the ancient ruins. Archaeological excavations began on the site in 1999, under the direction of Prof. J. Andrew Overman of Macalester College. For twelve seasons (1999-2011), J.A. Overman and his team, with the assistance of co-directors Daniel Schowalter of Carthage College and Michael Nelson of Queens College in NY, worked to uncover the Roman sanctuary complex at Omrit. Their excavations have recovered evidence of three separate building phases of the temple. The first phase, commonly known as the “Early Shrine,” was built around 20 BCE. The Early Shrine was constructed out of local limestone which was stuccoed and painted with polychrome frescoes meant to imitate precious stone veneer. Many of these frescoes have survived in startlingly good condition and preserving them will be a top priority in the years to come.

During the first century CE, Herod the Great decided to replace the Early Shrine with a new, much larger temple (Temple I). This new temple conformed to the standard paradigm used for emperor-cult temples in East: prostyle, tetrastyle with a high podium and staircase. The Roman historian, Josephus (Ant. 15.363; War 1.404), states that Herod built an Augusteum (i.e., a temple of Augustus) in the region of Caesarea Phillipi, a town approximately 2 kilometers away from Omrit. Based on its architectural design, J.A. Overman has identified Temple I at Omrit as the Augusteum mentioned by Josephus. The construction of this new Augusteum not only reaffirmed Herod’s loyalty to Augustus, but also helped to assure the continued participation of the local Iturean population in the imperial regime.

During the late first century CE (c. 79-96 CE), the temple at Omrit underwent a final phase of expansion (Temple II). The podium was significantly widened and a peripteros (or row of columns) was installed around the entire temple. J.A. Overman believes that this final expansion of temple at Omrit may have been related to the visit of the Roman general, Titus, to Iturea in 70 CE. Josephus reports (War 7.24) that after quelling the Great Jewish Revolt, Titus held his victory games at Caesarea Phillipi. It seems likely, therefore, that while he was in the region, Titus decided to renovate the Augusteum at Omrit as a way of permanently commemorating his victory over the Jews.