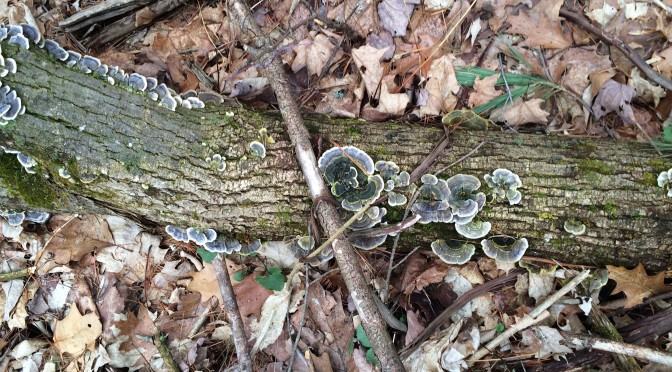 I’ve never seen old growth forest. As Hopkins Memorial Forest manager Drew Jones leads me to the Beinecke Stand, it is not massive tree trunks I notice first – it’s the ground. The forested earth pitches sharply downward. Fallen leaves, loose sticks, and scattered stones coat this thirty-five degree slope, so we choose our footing carefully, grabbing saplings when we inevitably begin to slide down the hill. I immediately realize why this swath of forest escaped clear-cutting even during Williamstown’s agricultural peak in the 1830s – this is no place for a plow.

Every five steps, I jog a few to catch up with Drew. A middle-aged man, Drew is light in color and bulk. Seventeen years as manager of Hopkins have given him an advantage. His feet and the forest floor communicate like the closest of siblings: silently, with hardly a glance. As I strain to hear his voice over the crunching leaves and rushing breeze, he tells me about this special ecosystem.

“So much on the land people just take for granted,” Drew said to me a few days earlier in his campus office.

I had only recently heard about the Beinecke stand, a patch of old growth forest tucked just a mile and half as the crow flies from the center of town. Intrigued by this hidden ecological gem, I visited Drew to learn more and to enlist a tour guide. He described the characteristics I should look out for in the stand, and the stories they would tell me. Speaking in a slow, heavily nasalized drawl, he employed a conspiratorial whisper every few sentences. Often his tone dropped below the volume of his office chair, which was in serious need of some WD-40. He and the chair bobbed up and down constantly, so as we talked we were joined by a third, rather irritating voice.

Drew spoke of contour lines, species composition, and something called “pits and mounds.” I scribbled this all down. I’d deal with it later. If we were talking old growth, I wanted to hear about big trees. How thick were the oldest ones? How tall were they? What species were they? And how old, exactly?

Drew entertained my misplaced redwood fantasies, and then directed my attention to something else. To understand the old growth ecosystem, he said, I should notice the shards of trunk suspended in vertical rigor mortis and the downed hardwood melting back into the soil. These are the engines that power the Beinecke’s soil cycle and sponsor its diversity of fungi, insects, and animals. Drew suggested I read a book or two on the issue.

Along the western boundary of the Beinecke, which we now patrol, I approach the largest tree. The base is wider than I am tall. Drew has told me that the most massive trees clock in at around 250 years old, never touched by humans. This one appears to split into two main trunks only a few feet off the ground. As I get closer, it becomes clear that this is not one tree, but rather two—a red oak encircles the base of a sugar maple, plastered white by lichen. A thin crack between the two species reveals a wide cavity, big enough for a human to stand in. The trees are mere shells.

“Gravity will take it down before it’s biologically dead,” Drew says cheerfully. When trees reach a certain age, all growth occurs at the outside of the trunk. The inner tissue becomes dead support wood, and can easily begin to rot, leaving the inside hollow. This natural process does not indicate illness, but it can compromise structural integrity. When a tree grows to the size of a Beinecke senior, a hollow base simply cannot support its weight.

Where Drew and I traipse, downed trees lie about in various states of rot. While the term “old growth” most often conjures images of redwoods reaching to the sky, much of what makes a primary forest tick is not in the air, but on the ground. Rotting trees feed the soil with carbon at a slow, steady rate. Dead trees that were snapped in storms, the base and part of the trunk left standing, are called snags. Snags provide housing for birds, small mammals, and countless insects. Fallen trees become home to the same kinds of creatures, and a diverse metropolis of fungus.

I see logs draped with lush veils of electric green moss and bejeweled with staircases of Trametes gibbosa—lumpy bracket fungi. On these tiny fungal tabletops, grey, green, and blue bands echo the swerving rim of the mushroom. T. gibbosa feeds on the remains of hardwood trees—beech, maple, oak, birch, ash, hemlock, and pine—speeding their disintegration with a white rot. Beetles of the Ciidae family eat and live in the fungus, and in turn become food for other beetles, flies, spiders, and mites. These fuel the forest’s web of carnivorous fauna.

As I walk past one of the fallen, the dark terracotta flesh of the log begs me to touch it. The chunk of log crumbles to soil in my fingers, ruining its disguise in the prismatic form of wood. I notice one of the horizontal logs has been violently disemboweled. Wood, spongy but still light in color—not yet soil—appears to have been scraped or gnawed into shreds that lie scattered about. I ask Drew what could have done this. Woodpeckers? Insects? Rodents? Apparently, a bear, digging for grubs. Maybe.

Finally, Drew reveals to me the secrets of the pits and mounds—the phrase I scrawled on some obscure page of my notebook. When trees are knocked over by windstorms, their roots wrested from the ground, they form pits where the roots were and mounds where the roots end up. During a mass blowdown event, several trees will fall in the same direction. The orientation of the resulting pits and mounds can communicate the direction in which the wind was blowing, and through this the type of storm that occurred (winter gales cause trees to fall toward the southeast, while nor’easters knock trees southwesterly). Thus the Beinecke’s past life is memorialized by the decaying remains of its fallen. These burial mounds also give the next generation of small-seeded tree species, such as birches, the opportunity to germinate on bare soil.

As Drew explains this to me, the forest instantly provides a textbook example to illustrate his point. A spiky hairdo of birch saplings crowns a particularly well-defined mound. The six waist-high birches sport signs of herbivory, and a pile of deer scat proves that the mound has also given a leg up, quite literally, to a bushy-tailed muncher. Again I witness the death of one organism facilitating the life of the next.

Fifty feet up in the Y-shaped crook of a red oak sits a still, dark mass I cannot identify. The edges are poorly defined, and it reminds me of a fuzzy soot sprite from My Neighbor Totoro or a big black net rolled into a ball. My mind runs through the few and dwindling possibilities. Squirrel nest? Some other kind of nest? Trash? I give up and ask Drew. He hesitates, then says, “You know, I think that’s a porcupine. See the spiky edges?” I give an involuntary, ear-shattering screech of joy. How did it get up there?

Apparently porcupines are very good climbers. They’ll clamber up as high as needed to reach the tree’s relatively new growth, as they eat only fresh, tender bark. Although they spend much of their time in the canopy, porcupines den in rotting logs and snags. In young forests and woodlots managed for timber, they are hard-pressed to find the hollow woody material they need for shelter. In contrast, the Beinecke stand’s motley weave of not only delicious young saplings but also the cozy, expansive cavities of arboreal cadavers offers perfect habitat for the porcupine. Drew was right—the dead stuff is important. I’m still beaming minutes after our discovery of the black blob in its oaken sky fort—a black blob whose life is supported by hundreds of years of uninterrupted forest growth and, more importantly, decay.