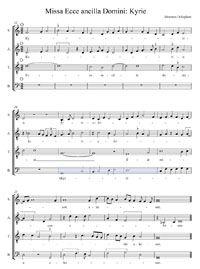 The Missa Ecce ancilla Domini by Johannes OckeghemJohannes Ockeghem, a native of Hainaut, earned considerable prominence due to his employment at the French royal court…, from which Obrecht quoted in the first Kyrie and Osanna of his Mass(from Latin missa, “dismissed”) (1) Main service of Roman Catholic worship (2) Musical setting of the texts of the Ordinary of the Mass, usually the Kyrie, Gloria, Credo, Sanctus, and Agnus Dei for St. Donatian, is based on the concluding segment of a fairly rare plainsong, the long processional antiphonA chant sung as a refrain to the verses of a psalm; also, a polyphonic setting of an antiphon Missus est angelus Gabriel, sung on Sundays during Advent in the rite of Paris. The text of the antiphon is drawn from the Gospel of Luke (Luke 1: 26-38), and relates the story of the Annunciation; the segment that Ockeghem selected as a cantus firmusA Latin term meaning “firm song,” applied to a previously existing melody, usually drawn from the chant or song repertories, used as the basis for a new polyphonic setting is Mary’s reply to the angel Gabriel that precipitated the Incarnation: “Behold the handmaid of the Lord, do unto me according to Thy Word.” 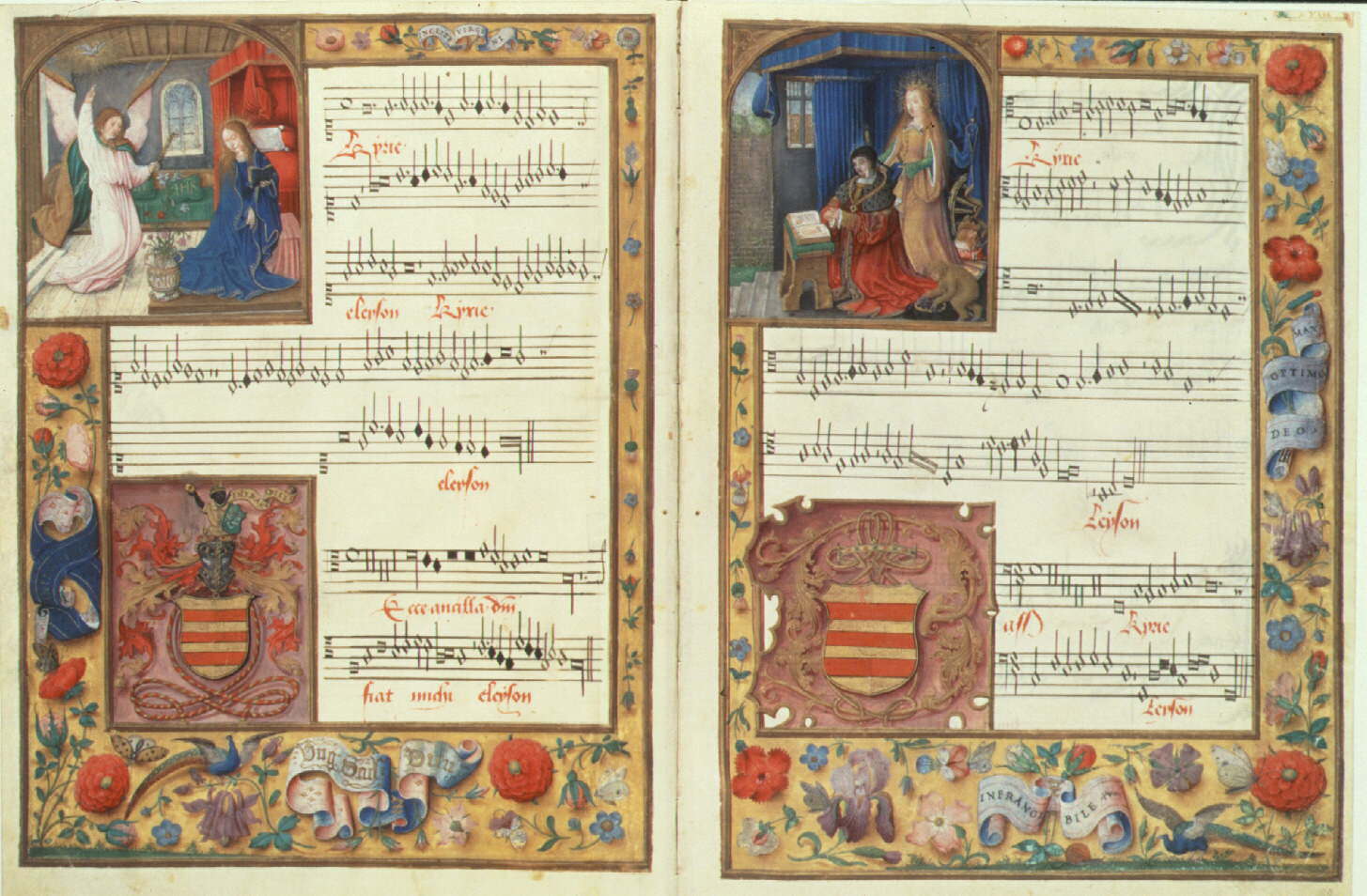 Click to see larger version adorning the opening in one of its two sources, the Chigi Codex (Vatican City, Biblioteca Apostolica Vaticana, MS Chigi C VIII 234), a lavish manuscript prepared for Philippe Bouton, Seigneur of Corberon, probably soon after Ockeghem’s death in 1497. Bouton is likely to have had personal contact with Ockeghem on four separate occasions in the 1460s and 1470s, and the Chigi Codex, with its extraordinary concentration of music by Ockeghem, seems intended in part as a memorial to the composer. (Although it has been generally assumed that the scribe of the Chigi Codex was employed by a scriptorium intimately associated with the Burgundian-Hapsburg court, an institution with which Bouton had official ties, the flawed readings of music by the court singer and composer Alexander Agricola contained in this and other codices copied by this scribe have called this assumption into question).

Obrecht’s inclusion of outright quotations from Ockeghem’s Missa Ecce ancilla Domini within his Missa de Sancto Donatiano apparently stem from two separate motivations. Most forthright was the younger composer’s wish to pay homage to one of the most famous composers of the day and to learn by emulating his uniquely suave musical style. More recondite are the ritual and theological implications achieved by referencing a Mass for the Annunciation within a non-Marian Mass setting. Obrecht places the most striking quotation from Ockeghem’s Annunciation Mass at the beginning of the Osanna, whose singing accompanied the Consecration and prepared the Elevation of the Host. It was at this ritual juncture that the substance of the host was transformed into the Body of Christ through the miracle of Transubstantiation, precipitated by the Words of Institution. Medieval theologians noted the potent correspondence between the miracles of Transubstantiation and Incarnation: just as the Incarnation was accomplished without loss of Mary’s virginity, thus making God physically present on earth, so did the Transubstantiation transform the bread without external change in Christ’s Body, making Him physically present at Mass. Thus Obrecht’s quotation of Ockeghem’s Missa Ecce ancilla Domini at the outset of the Osanna functioned as a sonic symbol of Mary and the Incarnation during this critical segment of the ceremony. Indeed, the Lamentation TriptychThe Lamentation triptych (ca. 1475), linked to the Master of the St. Lucy Legend by the pomegranate pattern worn by St. Donatian, bears a connection to Obrecht’s Mass for Saint Donatian in both its original location and its donors… before which the celebrantthe priest officiating at the Eucharist raised the Host would have visually confirmed Mary’s essential role as Christ’s mother for everyone present at Donaes de Moor’s commemorative Mass (as shown at the conclusion of the film clip of the first Osanna found on this site).

Select Bibliography:
For more on Ockeghem’s Mass and its influence on Obrecht, see:

For more about the Chigi Codex, see:

Fitch, Fabrice. “Alamire versus Agricola: The Lie of the Sources.” In The Burgundian-Habsburg Court Complex of Music Manuscripts (1500-1535) and the Workshop of Petrus Alamire, 299-308. Edited by Bruno Bouckaert and Eugeen Schreurs. Yearbook of the Alamire Foundation 5 (2003).