2020 boasts of two solar eclipses, an annular eclipse on June 21 and a total solar eclipse forthcoming in South America on December 14.  Travel restrictions prevented Americans, Canadians, and many others from Earth’s western hemisphere from the annularity path that stretched from Africa through the Middle East to Pakistan, India, and Tibet.  But people on the spot in those countries provided wonderful images to those of us who monitored web images and live streams in the middle of the night, while it was daylight in the eclipse path.

On June 21, the Moon was relatively far from Earth in its elliptical orbit, so its angular size was relatively small.  It therefore fit within the solar disk even when we were in syzygy, with Earth-Moon-Sun in a straight line.  We have the advantages now not only of instant communication halfway around the world but also of online eclipse-path mapping by Xavier Jubier of France (http://xjubier.free.fr/ase2020map), and Fred Espenak’s EclipseWise.com (taking over from his pre-retirement site at NASA: https://eclipse.gsfc.nasa.gov/SEgoogle/SEgoogle2001/SE2020Jun21Agoogle.html)

with zooming and clicking providing eclipse-contact data at any location; high-quality eclipse mapping by cartographer Michael Zeiler of New Mexico; and cloudiness statistics gleaned over decades and discussed by Jay Anderson of Canada (with whom our joint Peterson Field Guide to Weather is being published in fall 2020). 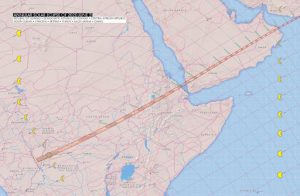 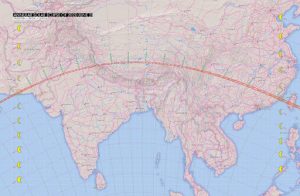 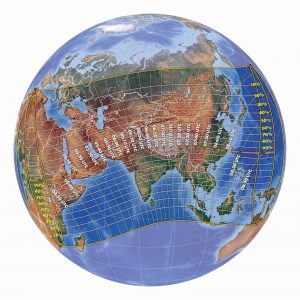 All these sites are linked to my website for the International Astronomical Union’s Working Group on Solar Eclipses, which I chair, at http://eclipses.info.  Observations are posted at my Williams College Eclipse Expeditions website for the 75 or so solar eclipses I have worked with.

An “annulus” is a “ring,” of course, so these eclipses have long been called “ring eclipses,” since a ring of everyday sunlight remains visible at maximum coverage, with between some tenths through some few percent of the solar diameter remaining visible.  So it could be called a “ring-of-photosphere” or a “ring-of-sunlight” eclipse.  The recent popularization of the term “ring-of-fire” eclipse, which apparently first appeared in print in 1992, is most unfortunate terminology, since the general public, to which the term caters, won’t on the whole understand that there is no chemical fire on the Sun, but rather a clean thermonuclear fusion of hydrogen gas safely 93 million miles away, to which we owe the light and warmth we receive from the sun.

After the June 21 annular eclipse crossed its African beginnings, from which I have not seen any observations, it reached the Middle East.  A few days in advance, I had given a Zoom lecture sponsored by an Iranian public outreach organization.  It was organized by Saheed Jafari, Director of International and Science Communication, Saros Science Popularization Team, Iran. 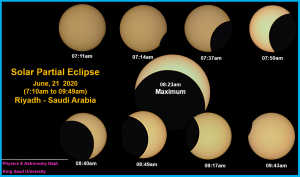 The path of annularity did not quite reach Saudi Arabia, but Albouazza Elhamdi of King Saud University captured a good sequence of partial phases in the early morning. 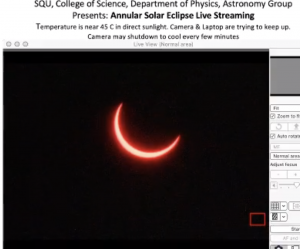 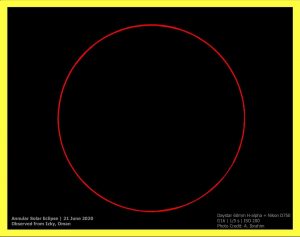 At about the same time, annularity passed through Oman. Alaa Ibrahim and Zach Ioannou of the Astronomy Group of the Department of Physics in the College of Science in Sultan Qaboos University provided a series of images and a live stream to delight those watching overnight.  They also tracked the temperature and humidity throughout the eclipse and reported that it was 45°C before the eclipse (leading to occasional overheating of the apparatus) but that the temperature went down all the way to 32°C, by 13°C or by about 23°F (from 113°F to 90°F) as the Sun was hidden by the Moon.  From nearby Izki, Oman, for their H-alpha imaging, they used a Daystar 60 mm telescope with a Nikon D750 digital camera.  Some prominences can be found upon stacking a large number of images, 210, as seen with a Lunt 80mm, and a ZWO ASI 1600mm Pro camera. 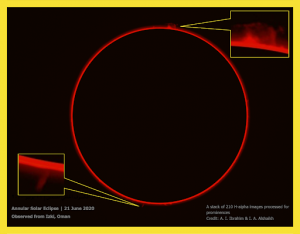 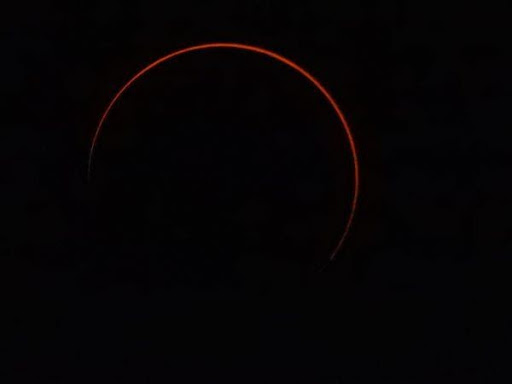 The Planetarium of PDO (Petroleum Development Oman) in Oman also had an excellent website during the eclipse. 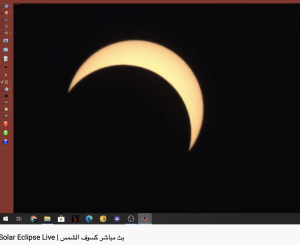 The eclipse annularity then proceeded to Pakistan, for which cloudiness statistics had not been as favorable as the lower Arabian peninsula, but where it turned out to be very clear.  From Sukkur City, Sindh, Talha Moon Zia, who is part of Team NCBC-NEDUET (Pakistan’s National Center for Big Data and Cloud Computing/NED University of Engineering & Technology, with NED meaning “in memory of Nadirshaw Edulji Dinshaw”), obtained some wonderful unfiltered observations, under the guidance from New York of Michael Kentrianakis (the former Project Manager of the American Astronomical Society’s 2017 U.S. efforts and a member of our IAU Working Group).  These observations were without any filter, in order to study the Baily’s beads and to try to detect the solar chromosphere and even the inner solar corona, in which they were successful.  (Note that Francis Baily had reported the beading at the solar limb during the annular solar eclipse he observed from Scotland in 1836, and that there is no “e” in either of his names.)  Mike narrates a video that appears at  https://youtu.be/n5eh959tr9A.

Working also with Nicolas Lefaudeux of France, we plan to extract imaging of coronal structure; I had collaborated with Nico on reporting his wonderful images of extended corona of the July 2, 2019, total solar eclipse at the virtual American Astronomical Society meeting in June 2020.

Previous total-eclipse Baily’s beads imaging discussed jointly with Xavier Jubier and with Ernest T. Wright of the Scientific Visualization Study of NASA’s Goddard Space Flight Center had led to our concluding that the International Astronomical Union’s nominal solar diameter needed a slight revision, given the high-resolution 3D mapping of the lunar surface from NASA’s Lunar Reconnaissance Orbiter as well as from the Japanese Kaguya mission.  This has now been confirmed at this 2020 annular eclipse. 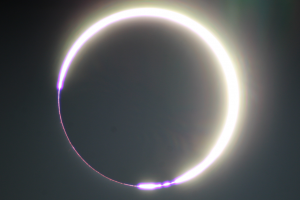 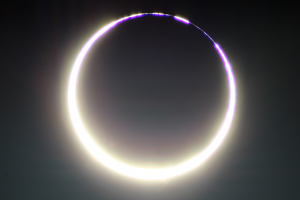 The next photo shows Rafay Kazmi, Williams College ’23, observed a partial eclipse from home in Islamabad, Pakistan.  He is shown here with his sister, each looking through a special solar filter, one of thousands left over from the 2017 American eclipse and available through Astronomers Without Borders, mailed him by Prof. Pasachoff, during the COVID lockdown. 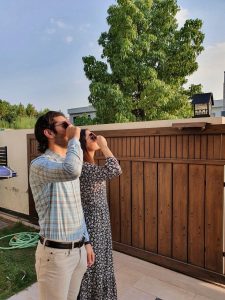 From North India, the Mango Education Group ([email protected]) observed in clear weather by Harindra Baraiya from Dehradun, the capital and most populous city in the Indian state of Uttarakhand, forwarded to me by Stephen Inbanathan of the American College, Madurai, who had been one of my hosts for last December 26th’s annular solar eclipse, which my wife and I observed with him, Robert Lucas, and Jagdev Singh (a member of our IAU Working Group on Solar Eclipses) from near the famous old Kodaikanal Solar Observatory. 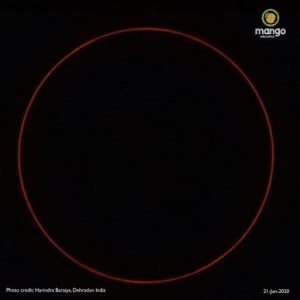 The series of observations from Mango Education, Combinatore, were taken by Hareendra Baraiya, a wildlife researcher in the Wildlife Institute of India, Dehradun.  The images were provided by Obuli Chandran. 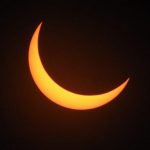 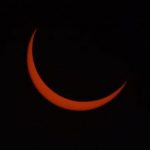 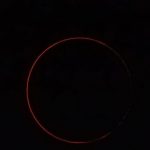 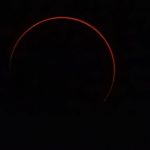 Also from north India, from Sirsa, Haryana, was a series of images by Ajay Talwar, with whom I had interacted at the 1995 total solar eclipse in India.  His 4-minute video at https://www.youtube.com/watch?v=S3FPOPSHdFA shows the setting and the series of annularity images.  Even through the clouds, one could see the Baily’s beads and solar chromosphere and, probably, a glimpse of the solar corona. 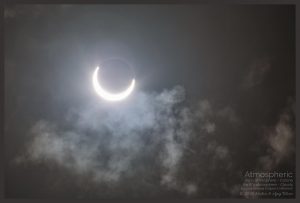 The Kodaikanal Solar Observatory in South India had only partial-eclipse coverage. 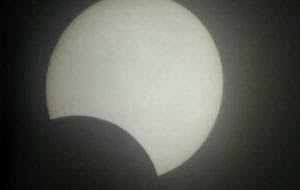 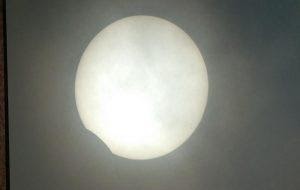 My original plans had been to observe from Tibet with Zhongquan Qu of the Yunnan Solar Observatory, but that travel and support didn’t work out.  Prof. Qu reports clouds from his observing site in Yunnan, in any case.  They had carried their 40 cm FASOT-1B telescope from Lijiang, Yunnan province, to Hall village, Puran county, Tibet, China, aimed at spectro-imaging polarimetry of the red coronal line and H-alpha as well as other spectra; lines simultaneously.

Amateur astronomer Zhou Guanhuai, who had previously corresponded about earlier eclipses, sent an image from Jinan, Shandong, China, with a magnitude of 0.67 of the solar diameter covered by the Moon. 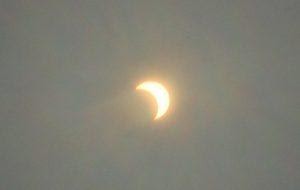 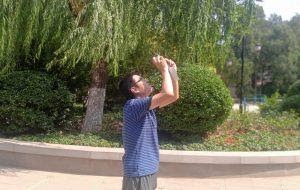 Near the end of the path of annularity, the eclipse was visible with 97% coverage from Guam, shown in this photo from Dean Patrick Servito.  The path of annularity crossed about 50 miles out to sea for the centerline though only a dozen miles to the edge, and one briefly considered attempt to fly to this U.S. territory and go straight to a boat, perhaps in quarantine, to reach annularity seemed a step too far even for a compulsive person like me, with not only health risks but also with too many places transportation holdups could occur. 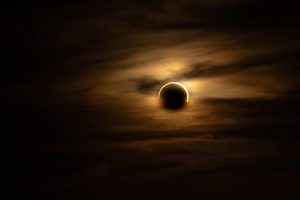 What was observable from non-eclipse sources?  Solarmonitor.org showed that the Sun was unusually blank, typical of the current sunspot-cycle minimum.

From space, we see the June 21, 2020, eclipse as captured by the XRT (x-ray telescope) on the Japanese Hinode Mission between 4-10 UTC; the false-color x-ray image was stitched together from four pointings in slightly different directions from before the eclipse.

(Thanks to Alphonse Sterling of NASA’s Marshall Space Flight Center; and Kathy Reeves and Lucas Guliano of the Harvard-Smithsonian Center for Astrophysics.)  Dr. Taro Sakao of the Japan Aerospace Exploration Agency, ISAS, was making scientific observations of nonthermal plasma motions in the high-speed solar wind stream with the Extreme-ultraviolet Imaging Spectrograph aboard Hinode, using the lunar silhouette for calibration of stray light. 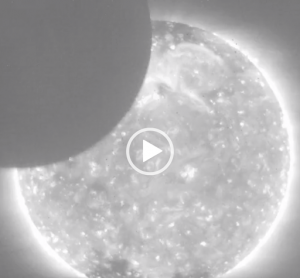 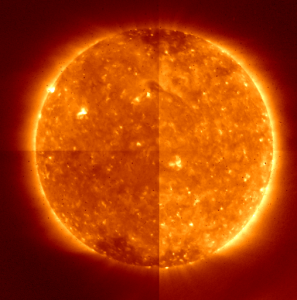 Astronomy Picture of the Day included an image taken from the International Space Station, with a Japanese cargo satellite in the foreground and the antumbra (the continuation of the umbral shadow of the Moon past its point) of the eclipse crossing near the border of Kazakhstan and China. (June 27) 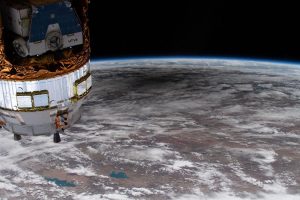 The passage of the shadow could be followed by the European Meteosat-8 (longitude 41.5°E) and the Japanese Himawari-8 (140°E).  Here we see a Meteosat view near sunrise in Africa, where the antumbra first touched Earth in Congo. 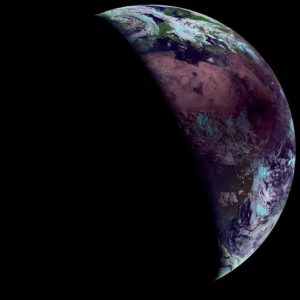 The next solar eclipse to be seen from Earth will be total, with its peak near the Argentina/Chile border, on December 14, 2020.  Let us hope that the sites in Chile and Argentina are accessible to international travelers.  The next annular eclipse will be on June 10, 2021, from southern Canada up over the north pole and down to the Russian Far East, with partial phases visible in the northeastern United States in the early morning.

Jay Pasachoff, who has worked on 75 solar eclipses, is Field Memorial Professor of Astronomy at Williams College, Williamstown, Massachusetts, and Chair of the International Astronomical Union’s Working Group on Solar Eclipses.  He has written about the Sun for Astronomy Magazine since its very first issue.  Asteroid 5100 is named for him.