Maison Centrale, Hoa Lo, the “Hanoi Hilton” (or the “Hanoi Hilton Hotel”, according to the museum’s typically humorless placard description)—Hanoi’s most important historical prison complex has gone by many names since it was built beginning in 1886. Today it is known as the Hoa Lo Prison museum, and is best known to western tourists as the place where US POWs, John McCain being the most famous of the cohort, were held during the Vietnam War. But if one arrived at the museum expecting the prison’s role in the Second Indochina War to be the focus, as many do, I imagine, they would be disappointed. The museum rather focuses on the prison’s genesis as a place where the French colonial authorities could imprison, torture, and execute Vietnamese anti-colonial resistors.

The Hoa Lo museum is in many ways summative of Vietnam’s approach to publicly memorializing the Vietnamese wars, and seemed a fitting final stop on our two-week tour of the country. The museum is contained in what remains of the prison; most of the complex was demolished to accommodate the footprints of the Hanoi Towers, two mid-rise mixed-use office and apartment buildings. Our tour guide remarked that this was necessary for Vietnam’s development, though it is unclear why such a historically significant site was mostly demolished for the sake of modernity over, say, any number of the many dilapidated French colonial buildings that pepper Hanoi (or, better yet, basically anywhere else).

This preferencing of development and the future over history and the past is common in Vietnam. The Cu Chi Tunnels that remained after America’s merciless bombing campaign of Southern Vietnam are presented to tourists in a Disney-fied complex complete with a shooting range, a model village, and creepy animatronic comrades tirelessly toiling away at various common tasks (i.e. hammering American bomb shrapnel into tools, making food, etc.). Our tour guide at the Reunification Palace in Ho Chi Minh City told us that it was preserved in the condition the Communist forces found it when they took Saigon in 1975, which seemed mostly true, yet the ornate main reception hall displayed an Abbott Labs banner—it was conveyed to us at multiple turns that the palace could be essentially rented for corporate events. This impulse to present a certain kind of face for tourists even crept into the allegedly somber War Remnants Museum: directly outside of the distressing and grotesque exhibit about the ravage done to the Vietnamese people by Agent Orange was a prominently-logoed ticket booth for Saigon’s version of Cirque-du-Soleil. The creep of capitalism and development, and tourism’s prime role in post-Doi Moi Vietnam’s economic scheme, was even more insidious and apparent in the state of the country’s lesser museums (i.e. the ones that don’t draw legions of tour groups). The Ho Chi Minh City Fine Arts Museum was dilapidated, many of the paintings warped or peeling like the walls of the once-grand French colonial palace it is housed in; the lights in the Ton Duc Thang Museum had to be turned on for a group of us when we strolled in.

Hoa Lo is the clearest distillation of the Vietnamese government’s public memorializing philosophy (or lack thereof). Preservation and presentation are not at the forefront, rather an ideological kernel of resistance and struggle, qualities fundamentally linked to Marxism and the Vietnamese Communist Party, is meant to be conveyed—beyond that, as far as Vietnam’s most potent historical sites and events are concerned, not much else matters. 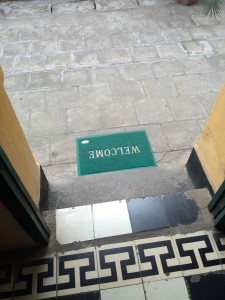 My hunch that Hoa Lo would confirm this suspicion was all but confirmed by the perverse placement of a “Welcome” mat at the visitor’s entrance to the museum, the implications of which are almost too absurd to explore fully given the word limit on this blog assignment. About 90% of the museum is dedicated to the French colonial authority’s brutal treatment of Vietnamese revolutionary men and women and their brave resistance—indeed, their use of the prison as a revolutionary school of sorts. Fair enough, but the museum’s authority as a memorial for those imprisoned by the French (they even built a shrine of sorts in a former prison courtyard, featuring depictions of emaciated prisoners) was undermined by a number of curious curatorial decisions. First, the almond tree: our tour guide informed us that the solitary almond tree left standing on the site, on the border with the Hanoi Tower development, would have been torn down had not former Vietnamese inmates, for whom the almond tree gave sustenance, medicine and hope, vigorously protested. Secondly, for some reason not even our tour guide could adequately explain, the French’s inhuman solitary confinement prison cells had been renovated by the museum… to include windows. To better let in light for visitors was the official line, but one that lacks explanatory power if the whole point of the museum is to emphasize brutality and resistance.

Who is this museum really for? Could it be that, for the museum’s curators, the only content that actually matters is the textbook placard statements regarding the museum’s history, a few ominous recreated prison cell scenes (complete with dummy emaciated Vietnamese prisoners), and the peace of mind of knowing that most tourists will leave without any confusion as to what they should think about the Vietnamese revolutionary narrative? It seems unlikely that one of Vietnam’s most central and important war memorials could have come together in this curious way by chance. 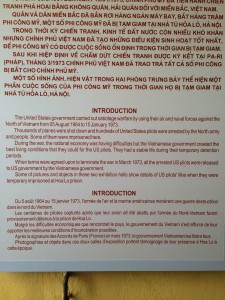 Then comes the part of the museum most appealing to American tourists: the bit about captured American pilots. The museum’s two rooms on the POWs emphasizes the destruction their bombing caused to Vietnam’s civilian population and the moral outrage of it all, and then it displays the VC’s deep empathy by showing that the POWs lived relatively cushy lives in prison—they could play sports, write to their families, help with domestic tasks, etc. They were also given good medical care, which must have been a scarce resource in North Vietnam at the time. Should we be surprised by this narrative? No, probably not. Americans were of course tortured at Hoa Lo. But their portrayal by the Vietnamese is ultimately fairly sympathetic; the pictures included in the exhibit, as well as the accompanying video, convey something pretty close to the truth about the POWs: they were young, scared, and did not necessarily represent the same ideology that the American government did (i.e. the museum literature describes the bombings and “sabotage warfare” as carried out by “the United States government,” not by US pilots).

This shows that despite the various bizarre elements of this and other Vietnamese war museums, Vietnam manages to eschew the demagoguery and centricity that has traditionally typified America’s war histories. It is well established that the victors get to determine war narratives, and Vietnam certainly has its own story to tell about its revolutionary struggle, but it also manages to include the enemy in a relatively fair and sympathetic way. Though Vietnam’s preservation and presentation of its historical sites and most sacred places of remembrance is quite unsettling at times, America’s culpability in Vietnam’s hapless rush to modernity and development cannot be forgotten. And, ultimately, these sites are built for us, western tourists, that we might question our preconceived notions of the war. In that sense, though it is focused on the First Indochina War, the Hoa Lo Prison is successful.