From the various posters and government propaganda we came across in Vietnam, it’s clear that Ho Chi Minh has become a symbol for the ideology and ideals of the country. However, what he has come to represent through the government constructed image of him in many ways contradicts the actual ideas that he voiced. This paradox can be seen at the Ho Chi Minh Mausoleum and surrounding grounds. The complex has cultivated a particular image of Ho Chi Minh to reinforce Vietnamese patriotism; however, it is an image that I suspect Ho Chi Minh would not have wanted.

The design of the Mausoleum works to create obedient compatriots in support of Ho Chi Minh, Vietnam and his Communist vision for the country. We were herded through a long line that weaved around the massive mausoleum. The walk provided many angles of this colossal building. Guards with solemn faces and dressed up in fancy white military costumes directed us along the path. As we approached closer to the building, guards directed us to get into two lines and asked for complete silence. It had the effect of turning the tourists into soldiers marching for Communism and Ho Chi Minh.

The building itself gave off an aura of supremacy. We were told that it was designed to evoke a lotus flower, but it felt much too heavy and bulky for that to be the case. It was made of thick dark stone, a heavy set roof held up by sturdy columns. With the mausoleum raised high above the ground, I felt very small in comparison. Both sturdy and imposing, the mausoleum cut across the skyline – the tallest building in the complex. The materials and architecture of the building made it a loud, materialistic presence in a complex full of trees and nature.

Once inside the building, the atmosphere was filled with a sense of spirituality, dignity and importance. The low lights created a somber and powerful mood. Four guards stood at the corners of the box where the embalmed Ho Chi Minh lay; they stood straight and looked unflinchingly forward. In the middle of the square room, the body encased in glass rested on a slab of stone. As visitors walked around three sides of the tomb, it felt like the body was a most prized possession, held at the center of this massive building and intensely protected like a rare gem. With Ho Chi Minh’s actual body on display, it felt somewhat like a shrine. One had the chance to actually be up close with the body of the great Vietnamese Communist leader. Such proximity worked to instill a sense of intimacy and power. He had been deified, his body turned into a relic. I could imagine that all of these design decisions imbued the visitor with a sense of national pride and respect for Ho Chi Minh. The site worked as a propaganda tool by the government to increase a sense of the state’s strength and reinvigorate visitors with the Communist cause.

However, the use of his body for this purpose becomes very problematic in light of Ho Chi Minh’s wishes and ideologies. Firstly, he specifically asked to be cremated. Instead, the government has put his body on display for the country to see, used as a propagandistic tactic. Secondly, Ho Chi Minh valued modesty and egalitarianism. In fact, we saw this later in the complex grounds. Ho Chi Minh believed that the enormous and lavish French parliamentary villa was too extravagant for him to live in. So he settled in much more modest accommodations – a house on stilts which consisted of a simple bedroom, study and dining area. I can only imagine that if he knew the enormous and imposing building where his body is now kept that he would be horrified and ashamed. The architecture of the building promotes elevated importance and power – the opposite of Ho Chi Minh’s ideals of a free society for all. The mausoleum is indicative of the ways that Vietnam’s government struggles to connect the powerful ideas and leaders of the past with a society very much driven by ideas like capitalism and an ever widening socio-economic gap that contradict the founding notions of the country 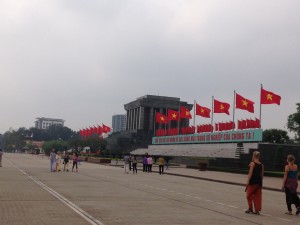