The somewhat sleepy Midwestern college town of Bloomington, Indiana, has only ever provided the setting for one movie. Fortunately for my hometown, that movie won an Academy Award. In Breaking Away (1979), four blue-collar youths band together to win a famous local bicycle race. They call themselves the “Cutters,” after the generations of stonecutters who worked in the limestone quarries around Bloomington. For most of a century, those quarries (see Figure One) were the primary industry of south-central Indiana. 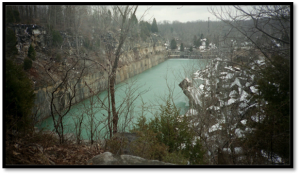 Figure One: Rooftop Quarry, outside Bloomington, IN. Quarries like this one sustained the economy of south-central Indiana for a century.
Source: Wikipedia

The rock that once made south-central Indiana prosperous continues to give the region its shape. Known the Salem Limestone, this geological formation is a uniform outcrop of pale stone that lies directly beneath the surface of much of southern Indiana; in some places, it reaches thirty meters in depth (Ambers 246). The shape of this limestone formation, together with that of the siltstone that intermingles with it, is responsible for the unpredictable landscape of my home.

Bloomington itself lies on the boundary of two geographic zones: the rugged Norman Upland and the more rolling Mitchell Plain (see Map One). The former is primarily formed of silica-rich siltstone, while the latter is defined by thick limestone bedrock, low rolling hills, and ubiquitous sinkholes and extensive cave systems (Hill). Many of Indiana’s key limestone quarries lie in this second area, the Mitchell Plain. 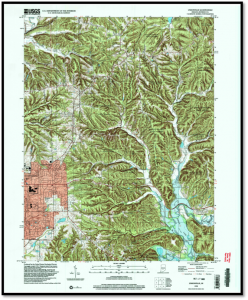 Map One: Eastern Monroe County, Indiana. Note how the topography flattens out around the city of Bloomington itself; this marks the divide between the Norman Upland and the Mitchell Plain.
Source: USGS

Both siltstone and limestone, like almost all sedimentary rocks, can only form underwater. Siltstone is, as the name suggests, composed of tiny particles of silt, compacted over time into rock. Since Indiana siltstone contains a high concentration of durable silica particles, this rock is harder than the surrounding limestone – hence the less eroded, more rugged siltstone hills of the Norman Upland (Hill). Limestone, on the other hand, is formed from the compacted shells of millions of dead marine organisms. It lends itself easily to the kind of cave systems that fill the Mitchell Plain, but it also erodes more swiftly than siltstone. This leads to a relief disparity, illustrated by an interactive map of the U.S. Geological Survey. The map shows the balance of siltstone (yellow-green) and limestone (medium-blue) in Indiana; in the southern part of the state, areas shown as blue on this map are also usually flatter than neighboring yellow-green zones.

All of this should not dull our wonder at a remarkable fact: limestone, in its origins, is a graveyard of marine invertebrates. And in the particular case of the Salem Limestone, that graveyard is thirty meters deep.

How did this remarkable formation develop? The answer lies in the deep past of the Earth: from about 490 million years ago until about 360 million years ago, Indiana lay near the equator and was covered by a warm, mineral-rich shallow sea. (Fall). The crinoids, bryozoans, brachiopods, gastropods, bivalves and other marine invertebrates that inhabited those primordial seas left shells and other biomineralized “hard parts” behind when they died; today, the Bloomington area is home to rich deposits of crinoid fossils (Ausich 131). Over hundreds of millions of years, those skeletons became limestone, and the silt of the seafloor around them became siltstone. Thus were laid the foundations of the Mitchell Plain and the Norman Upland.

By about 350 million years ago, Indiana had begun to rise above sea level: rain eroded the neighboring Acadian mountains and washed the resulting fine mud into the shallow sea, forming deltas where plant material accumulated and ultimately formed coal deposits (Fall). These processes filled in the ancient sea, and by 250 million years ago, the whole state was above water. As a result, the limestone and siltstone formations created over the previous two hundred million years were exposed to the elements. Since that time, Indiana has never again been underwater; as a result, all major rock formations in Indiana had already formed before about 300 million years ago (Fall) (see Map Two). Crucially, this means that the thirty-meter-deep slab of the Salem Limestone lies directly beneath the surface of the Mitchell Plain: it can easily be quarried in open pits. 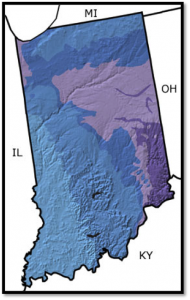 Thus it is that siltstone and limestone, the relics of a sea that died three hundred million years before the first man drew breath, now give form to the rugged hills and winding caves of my home. And from the bones and shells of ancient invertebrates came the rock that now sheathes the walls of the Pentagon and of the Empire State Building (“History.” Indiana Limestone Institute of America) (see Figure Two). So the next time you pass one of our nation’s government buildings, its smooth stone walls gleaming white in the sun, spare a thought for my hometown – and for the “cutters”, real and self-declared, who lived and worked for decades amidst the vast underground graveyard of all those millions of ancient microorganisms. 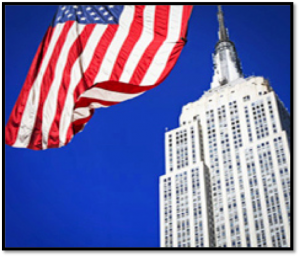 Ambers, Clifford P. “Evidence of elevated pressure and temperature during burial of the Salem Limestone in south-central Indiana, USA, and its implications for surprisingly deep burial.” Sedimentary Geology 143 (2001): 245-257. Web. 12 Nov. 2014.