This essay, really, functions as an excuse for a personal indulgence into a subject I continue to spend a large proportion of my time studying. This subject? Vocal jazz. More specifically, Ella Fitzgerald vs. Sarah Vaughan. The ultimate head to head. 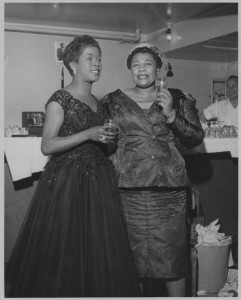 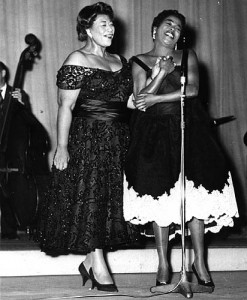 I always get a little fluttering in my chest when I meet another person who follows vocal jazz, who listens past the remastered ‘best of’ albums that pop up first on iTunes and really follows the genre. The one thing that holds me back from immediately adding them to my list of possible soulmates? Ella vs. Sarah. If they prefer Ella, I’m suspicious of their taste and style. I have worked to let go of this, because I am generally outnumbered, but the thought still crosses my mind. My preference for Sarah over Ella did not develop over time, but has existed since I started listening to jazz. It’s a firm belief. Why does this matter to anyone besides vocal jazz dorks? For that answer, we’ll have to look to Theodor Adorno and Max Horkheimer, two critical theorists who conceived of something called the ‘culture industry.’
Theodor Adorno and Max Horkheimer’s The Culture Industry: Enlightenment as Mass Deception presents a critical theory, drawing from Marxism, with chilling implications. While each paragraph of the essay could be poured over individually, each sentence revealing some new consideration, for the purposes of this post, I will discuss the ideas I found to be most pertinent to main focus: Ella vs. Sarah. The essence of Adorno and Horkheimer’s argument is that culture, through trends in mass production, has been reduced to consumption through the process of commercialization. He points to the perceived demarcation in songs, artists and even genres as superficial, having much more to do with market categorization, or as he puts it “classifying, organizing and labeling consumers,” than the artistic subject matter (Adorno and Horkheimer 3). Adorno concludes that culture, across genre and medium, is essentially producing “ruthless unity” masquerading as distinct pieces of cultural import (Adorno and Horkheimer 3). This pronouncement does not sound very good. It’s downright devastating. Even though I did not want to believe Adorno, while reading his work, I began to see his point.  One experience held me back from submitting to his theory entirely.
In fact, that experience concerns my involvements with one of Adorno’s least favorite musical genres, jazz. Specifically, I’m going to look at Sarah Vaughan’s Be Anything (Darling Be Mine) and Ella Fitzgerald’s Mr. Paginini. Comparing two of the most famous jazz vocalists, who gained popularity around the same time, singing similar material, much could be said about their similarities as I’m sure Adorno would point out. Instead, I would like to discuss how, despite such similarities, these two artists’ dissimilarities, serve as a counterpoint to Adorno’s assertion of the homogenizing effect of the culture industry. These two artists represent more than cogs in a system of mass production—simple tools for organizing people into categories to consume. The differences, including my own personal preferences, are evidence of another dynamic.

First, let me describe these songs in more detail. Mr. Paginini is a song intended for a big band format. The Decca recording of Ella features a full big band arrangement. Fitzgerald was well known for her work with big bands more than any other vocal jazz artist of the time. For listening purposes, I focused on a paired down version performed in 1961 live with a trio at a club called the Crescendo for Ella’s Ella in Hollywood album.

This tune has every bell and whistle. It begins rubato (out of time) with the piano following her phrasing, creating a dramatic, starting point. Then at :35 the band grounds a tempo to begin a steady ballad. This section is characterized by Ella’s steady, even phrasing, laying out the melody for the listener. All the instrumentalists stop at :59 and Fitzgerald inserts a scat line with a double time feel that seamlessly connects back to the slower tempo so she can sing the second verse at 1:06 with the band. This scat line is precise in terms of the pitches she chooses, syllables and the ways in which she immediately switches into double time and ritards back to the ballad tempo the band has established with little audible effort. At 1:22 we get another Ella-ism. On the words “and if you can’t swing it,” she alters the melody to create a fast procession of mostly chromatic notes (notes that are close together in pitch). This effect creates excitement and interest right before her next a capella scat insertion at 1:28. At 1:56, instead of a scat insertion, Ella actually references the A section of I’m Beginning to See the Light, a device common to jazz and one Fitzgerald uses often. After the next scat insertion at 2:28, she stays with the double time feel and sings the melody twice as fast. At 3:27, she employs another scat insertion to down shift to the slower tempo for the final phrases of the tune. There is, perhaps, the most impressive show of her chromatic variation of the line at 3:39 finishing the song with an elaborate display of her musical ear. My point in describing this song in painstakingly detail is to show how much Ella had going on. She was using every trick in the book. This tune is representative of Ella’s stylistic and artistic vocabulary. She was precise, a masterful technician with fast moving phrases, adept at harmonic and tempo alterations and improvisation, similar to an instrumentalist. She was grand and performative, her vocal quality and tight vibrato well suited to big band arrangements. Her phrasing and emotional timbre delivered through her tone were consistent. She was, perhaps, the closest we have seen to a jazz singer displaying the same qualities as the great jazz instrumentalists. Many consider Ella to be the greatest jazz singer of all time because she was so technically proficient and consistent. I disagree. My favorite is another.

Sarah Vaughan’s Be Anything (Darling Be Mine) is one of my favorite songs. My favorite version is from her famed album: Sarah Vaughan Live at Mister Kelly’s (Live 1957).

This tune epitomizes Vaughan’s distinctiveness in the same ways that Mr. Paginini does for Ella’s. Be Anything is a tender ballad without frills or unnecessary ornamentation. Vaughan paints beautiful imagery with her long, drawn out phrasing. This version in particular features stunning moments of dialogue between Sarah and the piano. You can hear them listening to each other through the nuances of their choices. The song begins with Sarah’s simple sung statement of the text, letting the words “be a beggar, be a thief,” declare the open heartedness behind the word. Keeping these phrases short and ‘talky,’ the piano answers back at :20 with a contrasting quick move down the scale before Vaughan starts her next phrase. She responds naturally, in an unrehearsed fashion, imitating the same phrasing for the next brief line “be my sunshine or my grief.” The piano player responds to her again just before she speaks the name of the song “be anything, but darling be mine.” For the first time, she starts to build, holding out the last note, singing on an ”n” sound, allowing her free, wide vibrato to ring. At :45 she returns to the A section, this time building volume and letting the phrase ring out. Her vibrato spills out of this phrase in contrast to the next line at :54 where she backs down in volume and handles the phrase delicately, softening her sound. She changes the melody for the first time, taking it higher before continuing into the bridge at 1:10. The bridge features long phrasing and a soaring, even tone as she touches the upper part of her register. One of the most achingly beautiful moments is Vaughan’s connection between the high notes and low notes in the bridge. She seamlessly connects them, sometimes with a little slide to create a syrupy, smooth texture in the line.

At 2:18 the tempo picks up and the band develops a more rhythmic feel to lead into her humming section. She hums as though she might just be humming to herself, unobtrusively, without affect. She integrates the humming with little bits of the lyrics. She returns to the bridge and does one chromatic altering of the melody at 3:53 to lead into the final A section. In the last A section she completely changes the melody, but rather than complicating it, she simply uses a higher vocal register. Here again, she drops off in volume, with many little slides and connecting phrases until the last line of the song. At 4:15 when she repeats “be anything” twice, she crescendos, imploring the object of her desire to finally be hers. With the last three words, she drops back down to a quieter volume, conveying the futility of her desire, ending the tune. Sarah replaces precision in notes and rhythm with an undying observance of to the arc of the story in the song. Each phrase is slightly different from the last, serving the text above all else. She is a master storyteller and uses the voice in service of this, exploiting its unique qualities and bringing them to new heights rather than imitating the precision and specific qualities of an instrument.

Certainly, I have always enjoyed Ella Fitzgerald. Mr. Paginini especially is a virtuosic wonder. It is entertaining to listen to as an exciting and difficult technical feat. That said, Ella’s technical virtuosity does not rise to my level of response to Sarah’s work. My experiences of Ella and Sarah differ dramatically, especially in so far as the effect that each singer has had on me. I can trace important moments in my life to Sarah Vaughan songs. In fact, the discoveries of certain Vaughan songs have become a landmark in my life all on their own. Somehow, her approach continues to transport me, connecting me with something beyond myself, while, at the same time reflecting my own ineffable emotional and psychological experience. The effect of each artist is completely and utterly divergent. Although others might not agree with me about Ella vs. Sarah, many other listeners will probably have their own musicians in mind who incite this kind of reaction. I simply cannot agree with Adorno’s argument that art is merely mass-produced sameness as a part of the culture industry defined by small differences. While I might be a connoisseur now, blowing tiny differences out of proportion, this strong and visceral preference developed at a young age, well before I might have been conscious of any such expert knowledge.
So then, how does Adorno explain this? How can personal preference, and, let me be clear here: not just a preference without grounding, but a concrete, even vital preference still follow Adorno’s principal of culture’s homogeneity?