Video games are part of a constantly evolving industry. Everything involved, from the graphics to the game design, is expected to be always improving. A modern game is nothing like a game that was made thirty years ago, except for in one regard, its portrayal of women. Since the early days of video games, female characters have been viewed in two ways, as prizes to be won or as unrealistically sexualized characters that provide gamers with visual pleasure. Much like in Mulvey’s arguments regarding the male gaze in Hollywood cinema, this creates a dynamic where men are the active characters exploring these video game worlds and women are simply passive objectives and attractions to motivate and entertain the consumer. Due to this, the player is forced to look at this world through the eyes of a heterosexual male. Even when the protagonist of the game is female, it is simply to give the player a butt to stare at as bad guys are fought. Grand Theft Auto V is no exception. In fact, it may be one of the clearest examples of the male gaze in video games.

Grand Theft Auto is a series that is praised for its innovative open world gameplay. In these games, players take control of a criminal in a city where they can engage in missions, play multiplayer events, or just simply roam around wreaking mayhem. GTA V was very well received when it was released in 2013. It won 7 awards, including Game of the Year in the VGX awards, an annual award ceremony hosted by Spike TV. 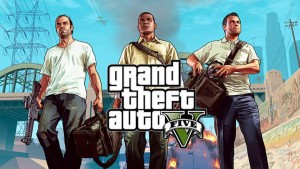 In the game, you play as three characters, Michael, Trevor, and Franklin, as they perform crimes and heists in the fictional city of Los Santos. This city has a large amount of NPC’s, non-playable characters that roam around performing many of the same jobs that a normal city would require. There are policemen, firefighters, paramedics, store cashiers, construction workers, etc. There are also pedestrians that walk around the city streets. The developers of GTA V paid very close attention to detail when building Los Santos, meticulously modeling it after Los Angeles. Many sections of the city have the exact same streets and buildings as LA. It’s very similar to its real world counterpart, except for in one regard.

Even though the population of Los Angeles is 51% women (U.S. Census Bureau), Los Santos comes nowhere near that. None of the characters that you can play as in the main story are female. The only women that appear in the main plot are the relatives and acquaintances of our protagonists. They are typically shown as annoying, adulterous, and self-destructive. The first time we meet Franklin’s aunt she’s yelling at him for being a freeloader. The first time we meet Michael’s daughter, she’s been tricked into starring in a porno. The first time we meet Trevor’s neighbor, she’s cheating on her boyfriend by giving oral sex to Trevor in exchange for heroin. These women are shown as awful people, but worst of all is that they play no major part in the main story. The named female characters are mentioned briefly but soon forgotten as our anti-heroes go on adventures in Los Santos. Furthermore, there is a severe lack of women in the jobs that the NPC’s perform. There are no female police officers, no female firefighters, no female paramedics, and no female construction workers. In fact, the only working women in Los Santos are strippers and prostitutes. In a game where the male criminals are at constant odds with the male police force in a male dominated city, women play no consequential roles.

Though it may be easy to look at a video game the same way that you look at a film, it’s important to look at the actual “game” part of the video game. GTA V is, at its heart, a game where you shoot and drive away from enemies. Most missions either consist of killing some number of enemies or trying to escape the cops. Recall that there are no female cops. There are also no female gang members, body guards, FBI, or really any female enemies. In the game part of GTA V, all the obstacles are male. Not only are the female characters inconsequential to the plot of GTA V, they also never get in the way of the player during the game portion. The only time that female characters play into the missions is when they need to be saved by our protagonists. One example of this is our first interaction with Michael’s daughter. We need to rescue her, against her will, from her porn shoot and bring her back home. In these instances, the female characters act more like objects that the male characters assert their ownership over. This is a common trend in video games, women are often treated as objectives.  In GTA, women never play active roles, they never stand in the way of the player and their goal. Women are only ever passive, either as an unimportant side character or as the objective the player is trying to capture. 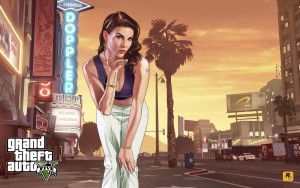 The women in GTA V are introduced as sexual beings and are never shown to be anything more than that. Recall that the only working women we see in Los Santos are prostitutes and strippers. In the GTA universe, women cannot exist in a nonsexual manner.

It’s no secret that the Grand Theft Auto series is heavily influenced by Hollywood crime movies. GTA V itself was heavily inspired by the 1995 movie Heat, which is about a group of bank robbers. Certain missions are obvious homages to this movies, including a mission nearly identical to the opening sequence of Heat where players must steal from an armored truck (Petit). This might lead some to brush off GTA’s portrayal of women as just them staying true to their source material, attributing the sexism to Hollywood and not to the game developers. However, this is far from the truth. In the movie, the female characters play a significant role in the plot. The bank robbers constantly grapple with the fear of losing their loved ones. They tell themselves that they are willing to drop everyone and everything at a moment’s notice in order to evade the cops, but their relationships are depicted as important in their lives. Even though their relationships put their careers as criminals in jeopardy, they struggle to maintain them, even when doing so can lead them into a trap. The women in this movie are important to the plot, unlike the women in GTA V. The developers of the game made the choice themselves to depict women in the way they did.

Some might argue that GTA V is a special case in regards to its lack of playable female characters and otherwise sparse cast of female NPCs. There are some very popular video games that star female characters including Tomb Raider and Life is Strange. This may be true but games with female protagonists are still the minority in a sea of male video game stars. An analysis of video game reviews showed that women were severely underrepresented in video games as active and playable characters (Ivory). That being said, I agree that GTA V is an extreme example with almost no female characters. But even in games with female protagonists, the male gaze is present. I was able to do my own research to show this using Steam.

Steam is the most popular online store for computer games. You are able to search through its library of games by filtering tags, short phrases that are attached to each game. There are 1,238 games that are marked as first-person or third-person. These tags refer to the perspective the player uses to look at the main character. In a first-person game, you look through the eyes of the character whereas in a third-person game you look over the shoulder of the character. These account for a good portion of the games where you identify as one character. Of these 1,238 games, 59% of them are first-person and 41% are third-person. This is no shock, first-person games allow you to more easily assume the role as the protagonist. 141 of these 1,238 games are also tagged as having a female protagonist. Of these, 62% were 3rd person and 38% were 1st person (Steam Online Store). This is the complete opposite trend than we saw earlier. When there is a male protagonist, we see through their eyes. They act as a blank slate that the player can project themselves into. When there is a female protagonist however, they’re more likely to be seen. This is the male gaze. If we are playing as a female, we’re not supposed to identify as them, we’re supposed to stare at their butt as we make them act out our fantasies.

Another argument one might make is that these video games have no female audience and thus are only catering towards their consumers. It’s true that in our culture, there is a strong stereotype of the typical gamer being a teenage male. This, however, is far from the truth. Though at one point teenage boys may have been the bulk of the gamer population, the Entertainment Software Association reports that women aged 18 or older represent 31% of the total American gaming population while teenage boys, age 18 or younger, only represent 17% (ESO). This shows that female gamers are a significant portion of the consumers of these video games, and yet the industry still only offers a male perspective.

Modern video games still stick to the age old gaming tradition of portraying women as either sexualized objects or as prizes to be won. GTA V may be an extreme example, but the fact that it is so widely praised only shows how accepted this practice is in the video game world. This is a very ugly side to an otherwise progressive medium. Video games are able to offer us experiences that would be impossible to experience in other mediums. In fact, they are just now being recognized as a legitimate form of art. I can only hope that video games will continue to evolve in a direction that will lead them away from the ugly aspects of their past.