Richard Dyer’s essay, “Entertainment and Utopia,” discusses utopian moments in entertainment, focusing specifically on musicals. His essay details the human desire for a better world as it is reflected in joyous musical numbers. He argues that these moments occur universally within all forms of entertainment. So then, do even dystopian novels, which by definition contradict utopian values, still support Dyer’s assertion that utopian values are present in all forms of entertainment? A quote from Margaret Atwood states “within every dystopia, there’s a little utopia.” Evidence of the truthfulness of that statement can be found in the following quote from Veronica Roth, the author of the popular dystopian novel, Divergent. Roth said: “Divergent was my utopian world. I mean, that wasn’t the plan… as I began to build the world, I realized that it was my utopia.” She could recognize the utopian ideals of her own fictional world. However, her utopia may be described as dystopian, considering that the world is not as peaceful and perfect as it initially seems. For her essay entitled “The Hunger Games as Dystopian Fiction,” Rena Nyman defined: “In contrast to a utopia, an imagined perfect world, a dystopia (from Greek root dus, bad, and topos, place) is defined as an imagined world in which everything is bad.  Common themes include government surveillance, poor living standards, totalitarian regimes, brainwashing, concealing of information, class dichotomies (particularly with a clear distinction and repression of the mass by the elite), police brutality, and status crimes.” (Nyman) It is common for utopias to fall short of their ideals or conceal dark secrets that would throw the once utopian society into complete chaos, dissolving into a dystopia. Although the idea of a utopian society can be briefly imagined, this society could not sustain itself due to the unpredictable nature of life. As Professor Gregory Eck reflects, “Because… utopia is rooted in theory, it will not always work.  In fact, more is written about the failure and impossibility of utopia than of its success, probably because the ideal has never been reached.” (Eck) Although we desire a world free of conflict and pain, it will never actually be achieved. The innate faults in our own human nature make it impossible for us to collectively strive for the same goal, despite it being for universal peace.

In Divergent, society is divided into five factions, each centered on a different core value: Abnegation, Amity, Candor, Dauntless, and Erudite. Prior to the events that take place in the novel the factions have been able to live in peace for many years as each one plays its role in society; thus successfully creating a utopian aesthetic. The faction, Abnegation, values selflessness and constantly concerns themselves with serving others. Similarly, the Amity faction values kindness and peace as they focus on farming and community. On the other hand, Dauntless are the militant protectors of the society who value bravery and fearlessness. While Amity and Dauntless hold opposing beliefs about the use of violence, both factions are necessary in order to maintain the balance. Each one has a core value which dictates its members’ roles in society. The Candor faction values honesty in all circumstances, and Erudite values knowledge; its members enjoy scholarly pursuits, such as scientific research and medicine. In the roles that the factions take on, they demonstrate the need for balance in a utopian society. However, this balance eventually collapses resulting in the deformation of the once utopia society into a dystopian society. This shift is brought upon by a conflict between Erudite and Abnegation. This initial conflict uncovers dark secrets about each one’s past and sparks a revolution.

Another issue caused by the structure of this utopian society is the requirement that everyone must commit to a single faction for the rest of their lives. 16-year-olds must decide which faction to join; they can either remain with their family in the faction in which they grew up or they can leave their family forever to learn to live in a new faction. They first take an aptitude test which is supposed to reveal their core value and therefore the faction in which they belong. But the test is not always able to decisively place someone into any one faction. These “divergent” cases are considered rare and dangerous to the order of the society because of their inability to conform. However, it would be better to consolidate all the faction values into one community, rather than dividing them. In the film, Four, an initiate trainer for the Dauntless who develops a relationship with the protagonist, Tris, tells her “I don’t want to be just one thing. I can’t be. I want to be brave, and I want to be selfless, intelligent, and honest and kind.” Although this mentality contradicts the societal structure in the novel/movie, it aligns with the ideal of a “well-rounded” individual. Unfortunately, Divergents are hunted, instead of celebrated, for their diversity of thought, and ideology. 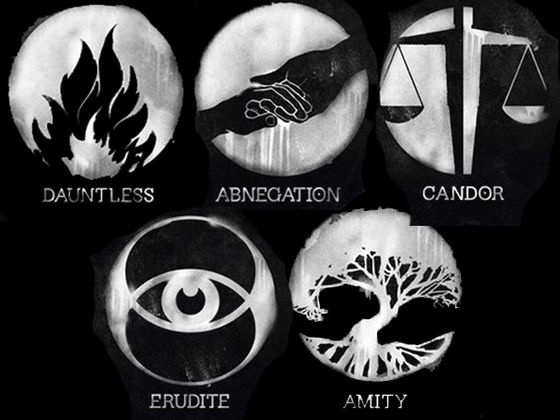 Also unfortunate is that the factions begin to enact changes which contradict their core values and ideals. The Dauntless manifesto says that they believe in “ordinary acts of bravery, in the courage that drives one person to stand up for another.” However, in practice, the Dauntless are redefining their definition of bravery as complete fearlessness and begin to value obedience over courage. They also fail to recognize the importance of “standing up for another.” Tris stands up for a fellow initiate in her class who was about to be punished (by being challenged not to flinch as knives are thrown at him). She takes his place and receives the punishment for him. Instead of being rewarded for her courage and selflessness, she loses “courage points” for being disobedient. As Dauntless value obedience more, Erudite learns how to manipulate this fact for their advantage. One day, Four shows Tris the loading area for deliveries and they see a few Erudite members loading boxes full of a serum that would render the Dauntless mindless, turning them into subservient slaves controlled by the will of the Erudite. The next day, all the Dauntless are injected with the serum and unknowingly begin to attack Abnegation and even kill some of their members. This is the handiwork of the Erudite leader, Jeanine Matthews, who strongly believes in the conformity of the masses to social order and she believes that Divergents are a threat because they cannot fully conform to only one faction. Her insistent, selfish ideology disrupts the balance of the utopian society and causes it to become a dystopia.  Again, this shows that Utopia is unsustainable due to the effects of human pride and stubbornness, which eventually destroy it.

A final dystopian aspect of Divergent is the existence of the “Factionless.” The factionless are those who fail the mandatory initiation process and therefore must live in poverty and exile as members of the “factionless.” Only the Abnegation are willing to help and serve the factionless by providing them with food and clothing. However the Erudite accuse Abnegation of selfishly using the resources which they say are for the factionless and so, with the impending revolution, the factionless are also in danger of losing even more resources. The existence of such a marginalized, unfortunate group of people in an otherwise ideal and affluent society blemishes the utopian image and reveals the innate dystopian influences in the society.

Even before uncovering the dystopian aspects of Divergent, the people seem to hold a constant desire for improvement. While this ambition ultimately causes the destruction of the utopian society in Divergent, it is also a necessary attribute for the creation of a progressive society. The paradox of desire as both a helpful motivator for progress as well as an inhibitor to social unity and tranquility in some cases further demonstrates the need for balance in order to sustain a utopian society. The moments when the film appears the most joyous for Tris occur when she feels liberated from the rigid social system and can truly enjoy the moment she is in. Tris was born into the Abnegation faction, whose members are often mockingly called “stiffs” because they are seen as uptight and over-zealous. While she believes in the value of selflessness in an abstract way, she has always found it difficult in practice. Therefore she chooses Dauntless because she desires to have new experiences among a new group of people. She had watched the Dauntless with admiration and longing for a long time, as she wondered if she would belong better with them. Near the beginning of the film there is a cafeteria scene in which, Tris and the other initiates are lifted up to crowd surf as they smile brightly, laugh, and cheer about being Dauntless. This is one of the most joyous scenes in the film. Another joyous scene was when Tris went zip lining through the city after her team won an initiate competition. Both of these scenes demonstrate the need for spontaneity and a sense of freedom. Although the societal structure of the Divergent world did create a utopia in which everyone can live in peace and harmony, it did not create a fantasy world in which there would be no conflicts or desire for more. Despite our ability to imagine a better world, we will never be satisfied with its implementation. A perfect utopia is not possible to be obtained because of the negative aspects of human nature, which are impossible to completely erase.

Despite the obvious negative connotations of a dystopian society, it is a naturally occurring, inevitable phenomena. Dystopian elements are necessary in maintaining equilibrium in a functional and progressive society. Although this may be counterintuitive, the previous examples demonstrate the need for a balance between the negative and positive aspects in order to vary the roles that members within the society must fulfill. Also, without dystopian elements, there would be no incentive to stimulate change and progress. This would create a stagnant society without innovation or improvement. Therefore, to avoid the creation of such a banal and fruitless society, the vital necessity of dystopian elements is apparent. As Veronica Roth once said, “If you actually succeed in creating a utopia, you’ve created a world without conflict, in which everything is perfect. And if there’s no conflict, there are no stories worth telling – or reading!”