The Devil Wears Prada (2006) is renowned for its strong female roles and an artificial look into the fashion industry. The movie follows Andrea (Andy) Sachs on her struggle to survive one year as the co-assistant (the other assistant is named Emily) for Miranda Priestly, the “dragon” editor-in-chief of the fashion magazine Runway. On the surface, the movie appears to demonstrate the power of the woman by casting two females as the main characters. However, as you delve deeper into the film’s exploration of gender roles, stereotypes, and even the editing itself, it is clear that this movie reinforces the common idealization of the woman: one that states that women must be attractive and depend on men for a societally acceptable life. It is crucial the ideologies are addressed because this seemingly progressive comedy actually promotes conservative morals.

The audience’s lack of industry knowledge allows this movie to culture our reaction to character roles and the work environment. On first impression, the movie depicts the fashion industry as being filled with women in successful positions. Nigel, the gay art director, is the only important man. The assistants are feminine, gossipy, obnoxious women who answer the phones and run errands for Miranda, the despotic editor-in-chief. During a scene with a designer, the film blatantly portrays Miranda as domineering the fashion industry. Miranda’s position of power strongly appears appealing to feminists.

The movie subconsciously prepares us for the roles of the two lead characters, Andy Sachs and Miranda Priestly, through the naming and casting processes. “Andy” is short for Andrea which means brave. This bravery is reflected in her job interview and her accomplishment at work. Anne Hathaway is cast as Andy. Her most prominent film before 2006 was The Princess Diaries, a movie that chronicles Anne’s transformation from a dorky, schoolish teen into an elegant princess. Andy echos this role. She begins the movie wearing lumpy poly-blend sweaters and rocking mane-like hair. However, her new job forces her to change her style and replace her dorky appearance with cleavage-revealing designer clothes, stilettos, makeup, and fancy hair in order to be successful. 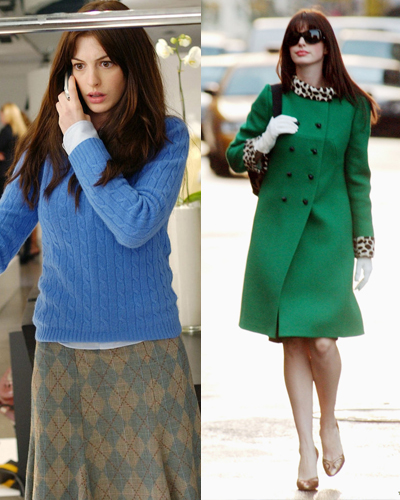 Alternatively, “Miranda” means admirable, and the last name “Priestly” reminds the audience of the diligent work ethic of priests and the nature of religion. Miranda is an admirable boss who runs the religion that is fashion. The female assistants hang on her every word. Yet contradictorily, she is also the “devil” of the title. Her masculine autocracy is shown as negative from the beginning. Finally, Miranda is played by Meryl Streep who has a reputation for intimidating other actors because of her skill and strong personality. Streep also has a history of playing strong female roles in movies like Julie and Julia, A Cry In the Dark, Silkwood, etc. As a result, she is an icon for lesbians and feminists‒the perfect actress for this because she already exudes feminism.

Julia Spiker, Ph.D. explored the underlying ideologies in this movie in her essay “Gender and Power in the Devil Wears Prada”. She writes, “Positive role models—powerful women—are needed in the mass media” (18). Her essay argues that the movie allows the audience to decide which role model they will accept as their own: Andy or Miranda. Andy is the example of the patriarchal working woman while Miranda is the idol of the feminist (25). In 2004, Stacey K. Sowards and Valerie R. Renegar claimed that women are empowered by strong female role models and, more importantly, they take away messages about their own oppression by looking at their own lack of power (544). Using this idea, Spiker argues, “Movies like The Devil Wears Prada demonstrate to young women that there is more than one way to wield power as a female” (25). She claims Miranda’s position as the strong role model shows these young women that the pursual of a power position is valid (i.e. some can and should become feminists who run organizations like men).

We are led to believe that the prevailing path for women‒the patriarchy‒is valid and admirable, while the path to feminism is actively dissuaded. This film puts forward ideas that women can pursue a career, but not if it means sacrificing their friends or the men in their lives, and women can be strong, but not masculine.

The Devil Wears Prada reinforces the ideology that women should not pursue career goals if the career takes away time from crucial figures of the patriarchy: family, friends, and partners. These institutions disapprove of Andy’s newfound independence. Her dad gives her a check to pay for rent and then guilts her to find a “real” job in journalism. His criticism is leveraged by her financial dependence. Andy’s friends also do not approve of her job. They get angry at her when her job makes her less available. The movie also conveys that a career oriented woman can’t please her man. Andy’s fights with her boyfriend, Nate, become more intense as she becomes successful at work. Nate won’t talk to her when she misses his birthday to meet an important journalism figure. When Andy told Nigel her personal life was falling apart, he replied, “That’s what happens when you start doing well at work”. This sentiment is reflected by Miranda’s husband pushing for a divorce and Andy asking Nate to take a break before she goes to Paris for work. However, she meets up with him in the scene after she quits her job, and their relationship rekindles. Every figure in Andy’s social circle disapproves her career, which forces the audience to believe a non-patriarchal career isn’t the right path for women. Miranda doesn’t appear to have friends, and she is a repeat divorcee. Why would women ever aspire to a life of no friends, family relations, or spouse?” The movie leaves the audience with only one favorable option: follow the patriarchy not the feminist career plan.

The Devil Wears Prada encourages the oppression of femininity at the hands of masculinity. Carol Clover explains that gender identity is not restricted to a person’s biological sex (1987). Masculinity and femininity are not not rigidly attached to the male and female sex, but are fluid. The Devil Wears Prada clearly puts forth the idea that those in power are masculine, and subordinates are feminine. A gay man and feminine women work for a dictatorial, masculine Miranda. Everyone in the industry admires Miranda’s irreplaceably masculine skill at running the magazine. The audience is repeatedly exposed to a message that reiterates inferior, femanine positions at the magazine are highly liquid, and “a million girls” would kill to work there. Andy becomes more successful when she makes more masculine professional decisions. Rank at Runway seems to suggest masculine leadership has a higher value than feminine dedication to fashion.

Hypermasculinity saves feminine Andy’s job and secures her a new job. When Miranda asks of her an impossible task, our damsel-in-distress resorts to a male journalist named Christian to save her job. Afterwards, Christian repeatedly showers her with compliments while reminding her of the debt she owes him. In Paris, he forces her to kiss him until she finally consents, and has sex with him later in the film. At the end of the movie, Miranda’s letter of recommendation gives Andy the job of her dreams as a journalist at a fictional newspaper. Ultimately, Andy owes her ultimate career success to masculine figures.

This movie suggests that it is acceptable for masculine characters to succeed in the workplace at the expense of feminine characters. When her job is on the line, Miranda maneuvers the politics of the industry to give her replacement a job that was supposed to be Nigel’s promotion. He is visibly crushed but assumes the stereotypical feminine role and backs down. The masculine boss saves her career by taking her feminine subordinate’s dream job away. Miranda states that it was no different from Andy’s decision to take Emily’s spot on the Paris trip when Andy confronts her about this Machiavellian move. Emily prepared for Paris for months, but when Andy’s job was on the line she chose to take Emily’s dream trip away. This movie shows cold, masculine behavior leading to success, thus promoting the idea that the masculine will continue to oppress the feminine.

The shot angles and editing techniques in the film subconsciously force the audience to identify with the predatory male gaze. Laura Mulvey argues mainstream film audiences are unconsciously constrained to objectify female characters because women are grossly underrepresented in Hollywood production (6-18). Women composed 18% of all writers, editors, cinematographers, producers, and directors in 2012 (“Film Facts” 1). Men control movies from start to finish. The director and editor for “The Devil Wear’s Prada are both males, resulting in a number of revealing scenes. The opening scene shows women changing clothes, most notably Andy, in various states of undress. The camera fixates on breasts, stomachs, and pelvises. In the scene after Christian and Andy have sex, the camera lingers on Andy’s naked, vulnerable figure under the sheets. The use of victimizing shots in this film make Andy, and women in general, a sex symbol. Hyper-feminization reinforces patriarchal ideologies. The film forces the audience, regardless of gender, to objectify women which detracts the messages of professionalism and feminism.

The Devil Wears Prada reinforces patriarchal ideals and the domination of the feminine gender role. The film wants the audience to acknowledge that women have to be attractive to be successful.

Andy remains attractive after she quits instead of returning to her old look. The movie shows the audience that masculinity equates to business success, through the career advancements of Miranda and Andy. However, Andy’s decision to quit her job, after she realizes that she doesn’t want to make masculine decisions (like dominate the feminine), informs females in the audience that women can only succeed in business if they keep their femininity. This film emphasizes that women should value friendships over their careers, they should allow men to support them, and finally‒with Andy’s decision to work for a male boss at the newspaper‒that men are more reasonable and less devilish bosses. In the end, this film conveys that working women ought to give up feminism and bow their heads to the patriarchy.