Check out what our alumni have been up to after graduation! 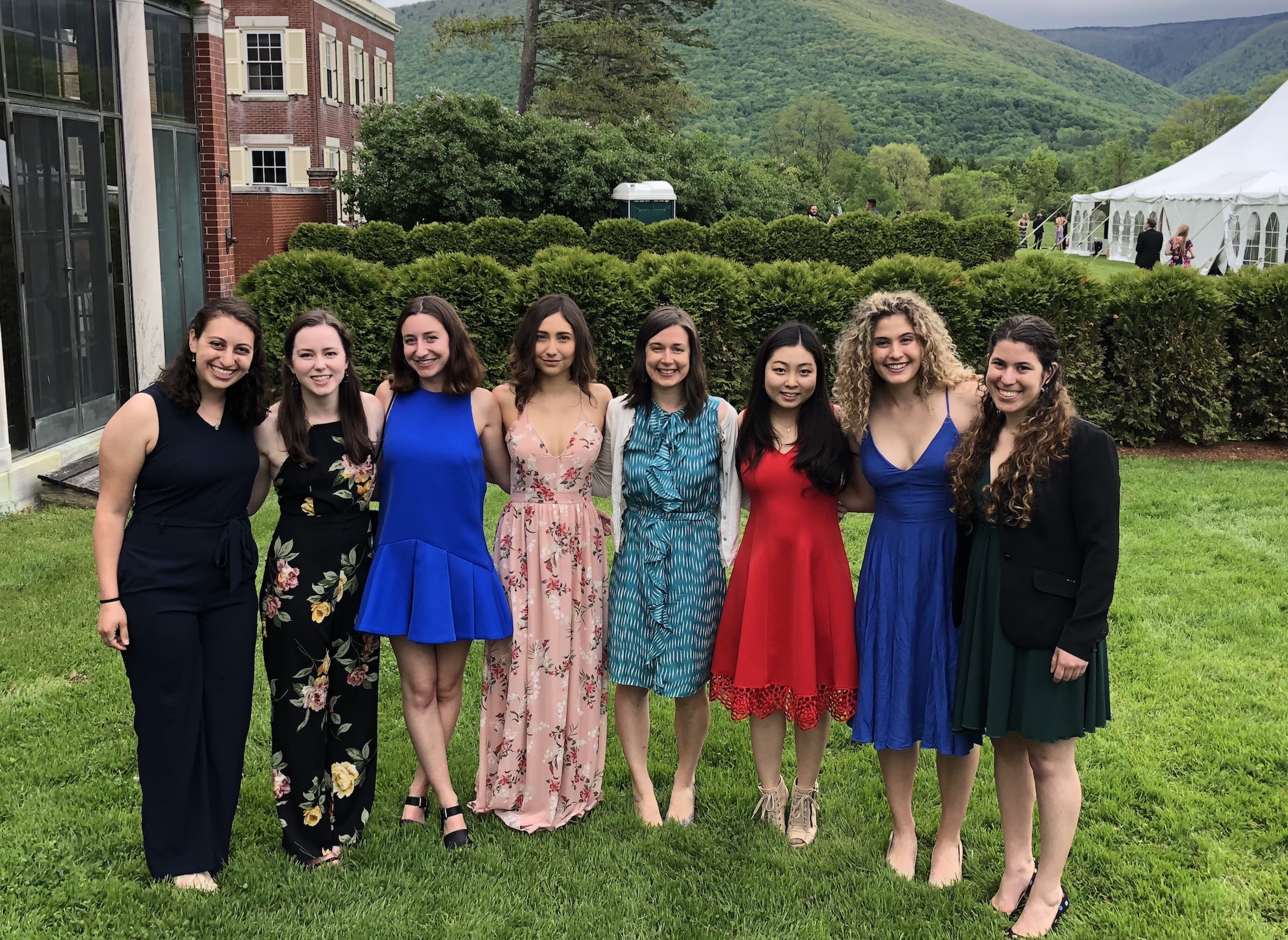 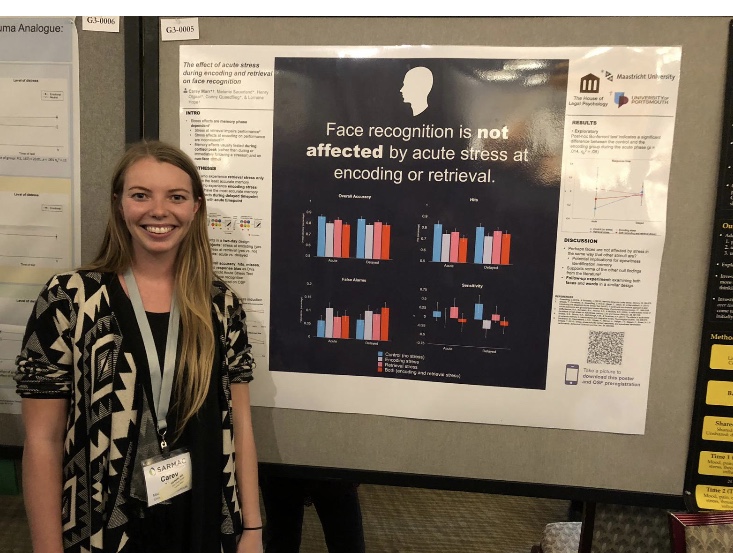 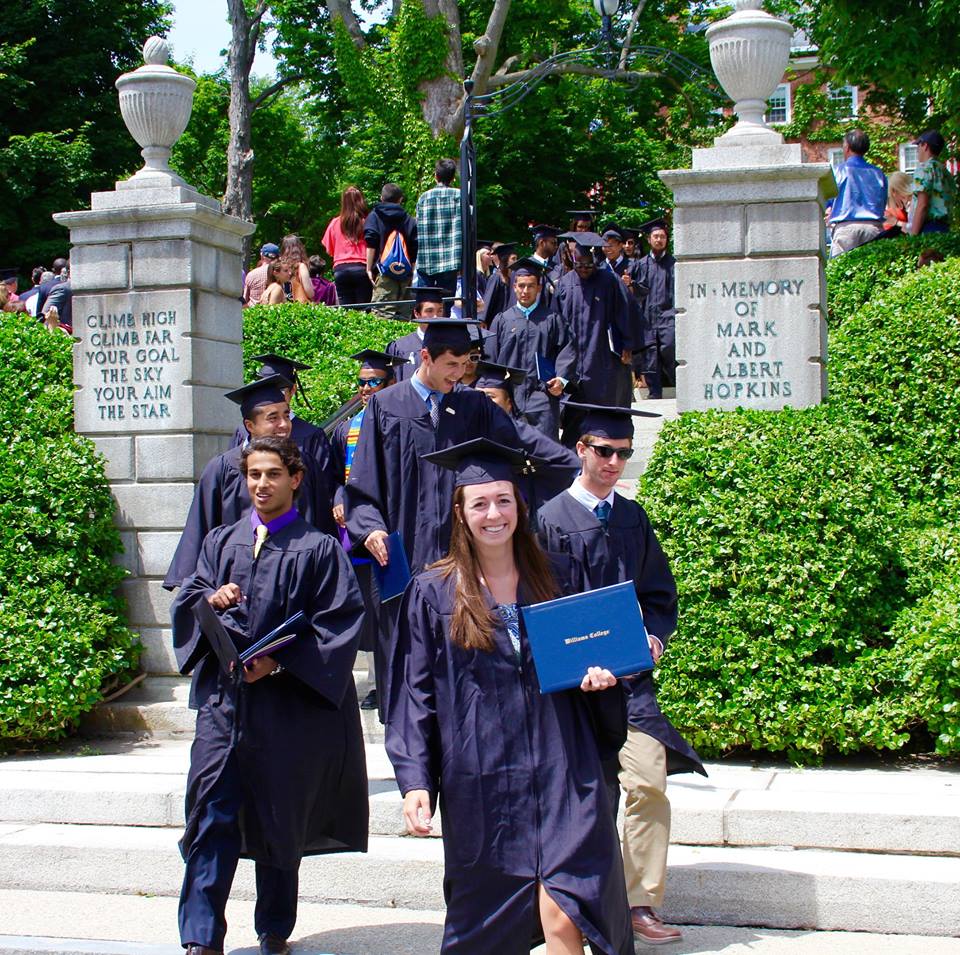 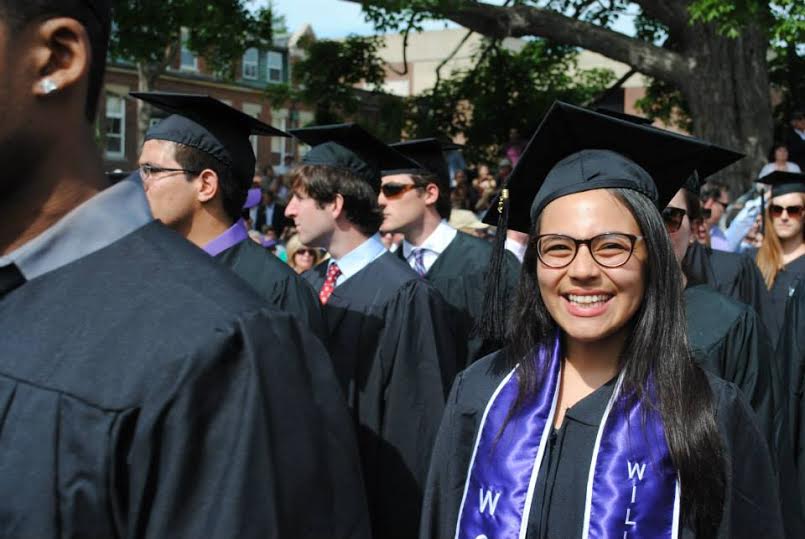 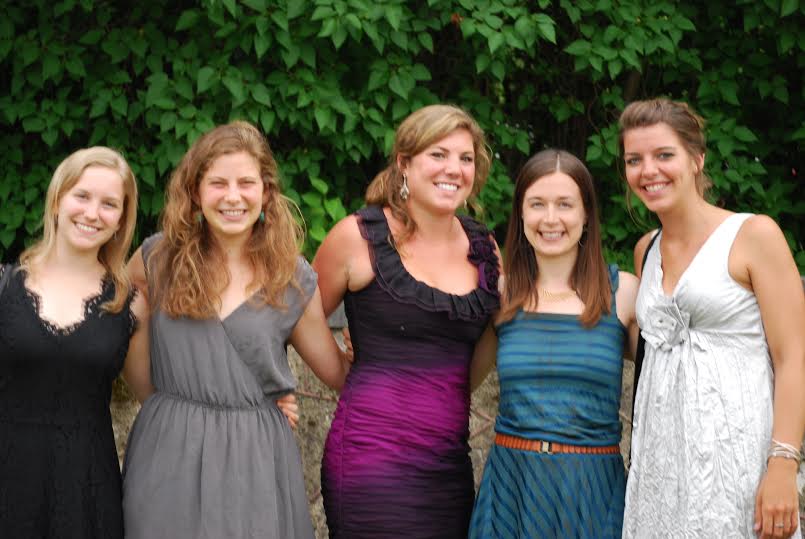 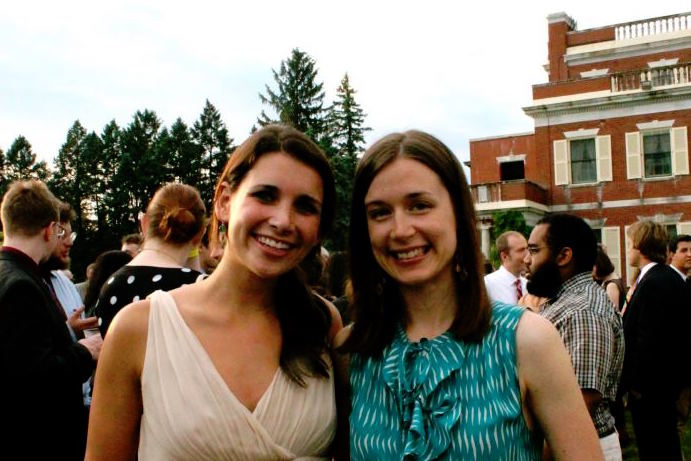 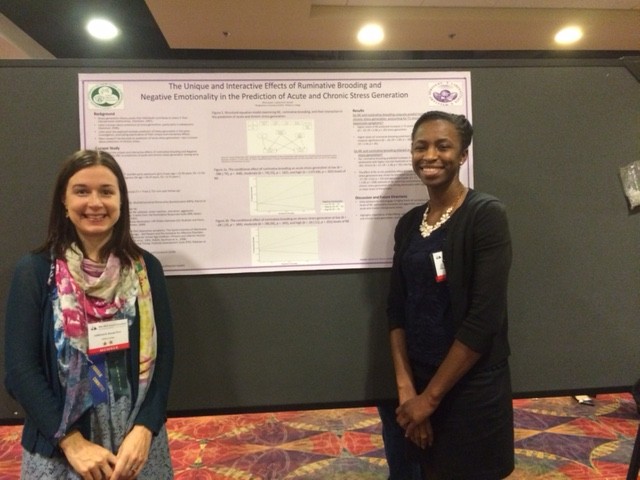 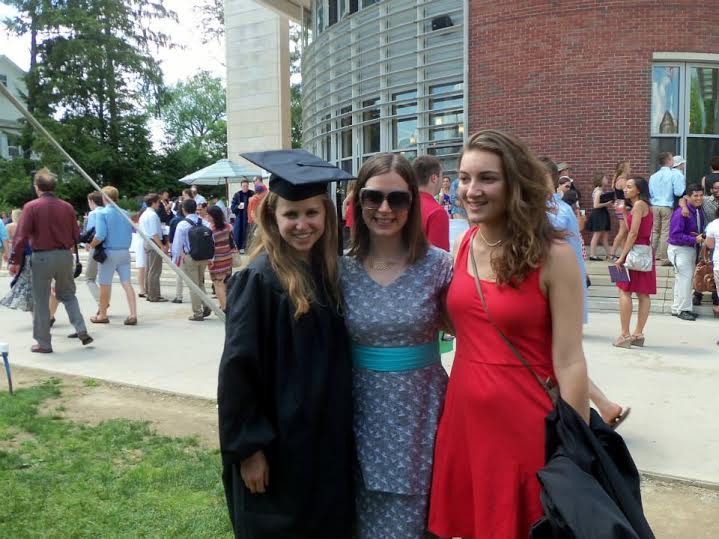 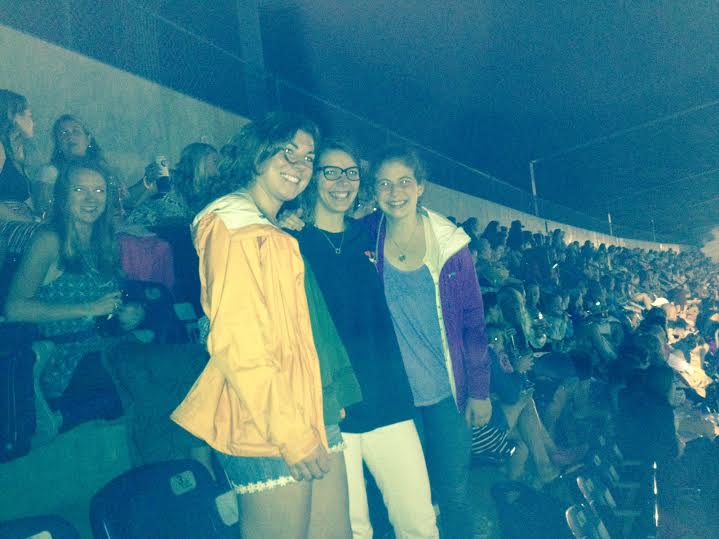 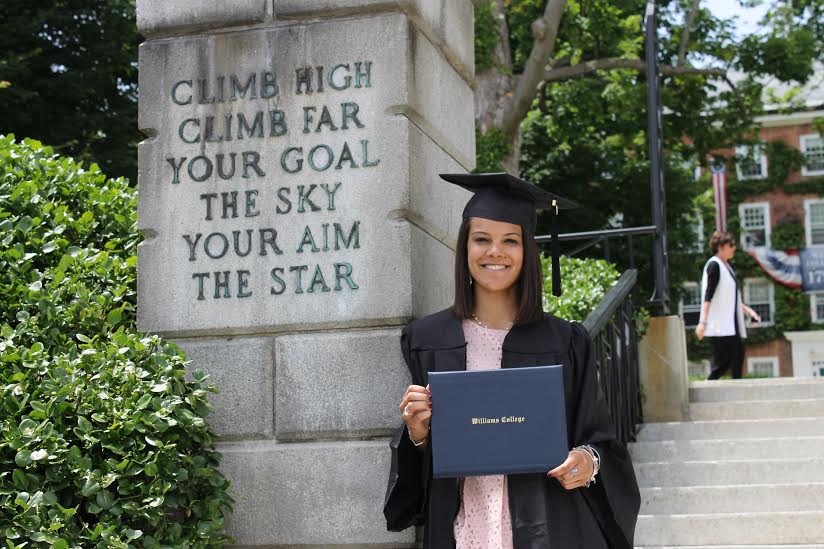 The graduating Stroud Lab members of 2019, together at Mount Hope.

Rachel Levin is currently working as a clinical research assistant at Bradley Hospital in Providence, RI. Her lab focuses on identifying and decreasing risk factors in teens who re-attempt suicide.

Isabel Benjamin is currently working as a research assistant with the MIDAS project at the Rhode Island Hospital partial hospitalisation project. She hopes to pursue a clinical psychology PhD.

Morgan Richman is currently working as a Clinical Research Coordinator at the Center for Women's Mental Health at Massachusetts General Hospital in Boston, MA.

Erin Lamberth is currently a Clinical Research Coordinator for the Center for Addiction Medicine at Massachusetts General Hospital in Boston, MA.

All of the 2019 Stroud Lab research assistants!

Haelynn Gim is working as a Research Assistant in a Stanford-Veterans Affair neuroimaging lab studying schizophrenia and psychosis. In the future, she plans to attend medical school.

Esme Navarro is currently living in New York City and working on a project at Mount Sinai that looks at the way environmental toxins affect children's brain development.

Avital Lipkin is working in New York as a Solution Consultant for DataArt, an international technology consultancy and software development company. She focuses on user experience research and design. 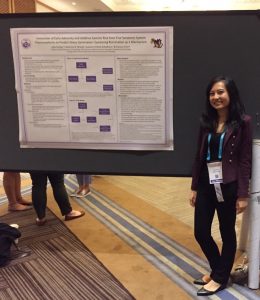 Julia presenting her thesis at ABCT in November of 2017.

Julia Cheng is currently working as a research assistant at Kaiser Permanente, and ultimately, will pursue a degree in medicine. 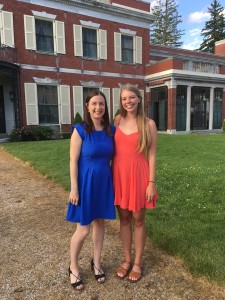 Kate and Carey celebrating her graduation at Mt. Hope

Carey with her poster at SARMAC (Society for Applied Research on Memory and Cognition) in Cape Cod, MA; June 2019.

Carey Marr is currently in the final year of her Ph.D. at Maastricht University in the Netherlands and the University of Portsmouth (UK) as part of the Erasmus-Mundus Joint Doctorate Program, the House of Legal Psychology. Her doctoral research focuses on the effects of acute stress on memory in eyewitness contexts. Previously, upon graduation, she worked as an au pair in Sydney, Australia, and also in a forensic psychology lab at the University of Sydney.

Natalie Bernstein, who majored in biology, is currently working in Chicago. 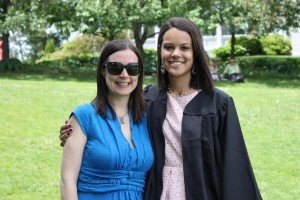 Erin and Kate after graduation 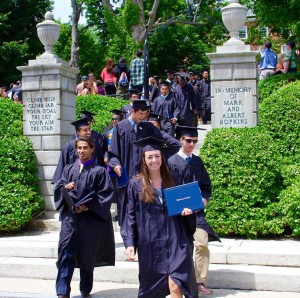 Emily walking through the gate after graduating

Emily O'Day is currently a third year doctoral student at Temple University in Philadelphia, where she is pursuing her Ph.D. in Clinical Psychology. She works in the Adult Anxiety Clinic at Temple under the mentorship of Dr. Richard Heimberg, and is particularly interested in the treatment of social anxiety disorder. She recently received her masters degree as part of the program, and defended her masters thesis on social anxiety, loneliness, and the moderating role of emotion regulation. Previously, she worked as a Research Coordinator at the Center for Anxiety and Traumatic Stress Disorders at Massachusetts General Hospital. 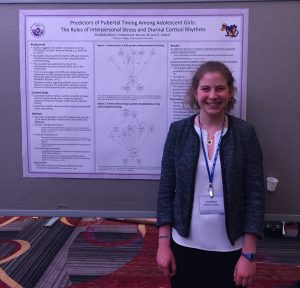 Liz Albert completed the Goucher Post-Bac Premed Program after graduating. While living in Baltimore, she served as a Case Manager at Charm City Clinic, a free clinic in the city. Liz worked at McLean Hospital as a research administrative assistant for a project that aims to enhance the care of underserved populations with Borderline Personality Disorder in the US and abroad. Currently, Liz is living in Philadelphia, where she is a second-year medical student at the University of Pennsylvania Perelman School of Medicine. In May 2015, Liz presented her thesis as a poster at the Association for Psychological Science Convention in New York City.

Stephanie Cardenas worked as a Post-baccalaureate Intramural Research Training Award (IRTA) Fellow at the National Institutes of Health/National Institute of Mental Health in Bethesda, MD. She is currently a 4th year Ph.D. student of Psychology and Law at John Jay College of Criminal Justice in New York City where she studies the role of defendants' emotions and beliefs in the context of plea bargain decision making. She is a recipient of The National Science Foundation Graduate Research Fellowship, and also received an Honorable Mention for Ford Foundation Pre-Doctoral Fellowship.

Marissa and Natalie at graduation

Blair Curzi worked in Boston, MA doing PR/Marketing work for New England Sports Network and in Public Relations at Cercone Brown Company. She is currently the Assistant Director of Hun Fund at the Hun School of Princeton in Princeton, NJ.

McKenzie Murdoch is currently living in Boston, MA and working at The Palladium Group as an Associate Consultant, a company that does strategy consulting across a variety of industries.

Felicia Farrell is currently attending the Columbia School of Social Work. She is also studying for her LSAT, which she will be taking in December.

Marissa Lowe worked for Teach for America in Houston, Texas after graduation. She is currently working in New York City as a case analyst at the Innocence Project, a non-profit law firm, working on exonerations of wrongful convictions through DNA testing.

Julia Marver, after graduation, worked at the New York State Psychiatric Institute as a Research Coordinator for a clinical trial of ketamine for individuals with significant suicidal ideation. She is currently in her fourth year of Fairleigh Dickinson University's PhD program in clinical psychology. 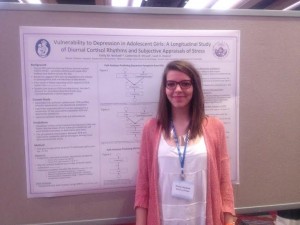 Emily Norkett worked for two years as a research coordinator at Boston Children's Hospital in the Department of Psychiatry after graduation, managing clinical studies that focused on neurophysiological and behavioral indicators of childhood psychosis and suicide. Currently, she is a second-year medical student at the University of Rochester School of Medicine and Dentistry. She is particularly interested in healthcare for the homeless and women's health. Emily presented her thesis as a poster in May 2015 at the Association for Psychological Science Convention in New York City. 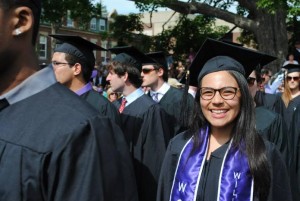 Natalie Plasencia worked as a Clinical Research Coordinator at the Adult ADHD and Pediatric Psychopharmacology Department at Massachusetts General Hospital in Boston, MA. Currently, she is pursuing the direct-entry Psychiatric/Mental Health Nurse Practitioner track at the University of California San Fransisco. She is also a research associate at Kallyope, a biotech research company based in NYC. She plans to continue neuroscience research in the future. 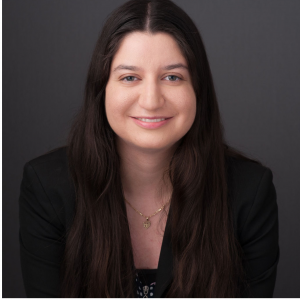 Nitza Solis, after graduation, worked on two projects at the University of Illinois at Chicago in the Department of Pediatrics. The first is called the Coordination of Healthcare for Complex Kids and she acted as a research assistant, helping with assessments to see if children who have chronic diseases need help with referrals for mental health services. The second project is called Promoting Adolescent Health and is a clinical trial examining whether the efficacy of an online Cognitive Behavioral Therapy program in preventing Major Depressive Disorder in adolescents. In June 2019, Nitza graduated from University of Chicago School of Social Service Administration with a Master's in Social Work and a clinical concentration.

She recently began a new position as CareGuide at a start-up company in Illinois called Homethrive. She works with older adults and their caregivers, providing case management and emotional support. Nitza is also working on getting her license as a LCSW (licensed clinical social worker) and hopes to provide a combination of case management and therapy to individuals in the future. 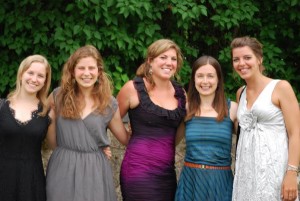 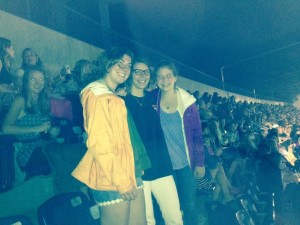 Blair, Emily, and Liz at a Taylor Swift concert

Julia and Knowl after graduation 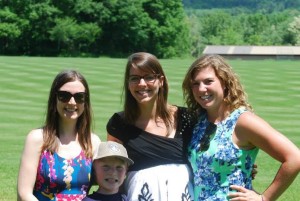 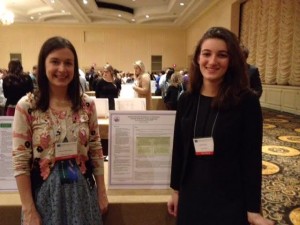 Kate and Jessie at ABCT 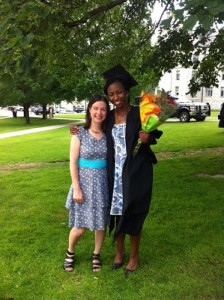 Effua and Kate after graduation

Jessie Fitts is starting her fourth year as a graduate student at the University of Illinois at Urbana-Champaign where she is pursuing a Clinical/Community Psychology PhD. In the fall of 2013, she presented her poster at Association for Behavioral and Cognitive Therapies Convention.

Effua Sosoo worked as a Project Coordinator and Project Interviewer at the Binghamton Mood Disorders Institute in Binghamton, NY after graduating in 2013. She is currently a 5th year Ph.D. student in the clinical psychology program at University of North Carolina-Chapel Hill.

Charlotte Vinson is pursuing a Masters in Elementary Inclusive Education, and Dual Certification in General Education and Teaching Students with Disabilities at the Teachers College at Columbia University. She will be graduating in December 2015 and plans to have her own upper elementary classroom shortly after. 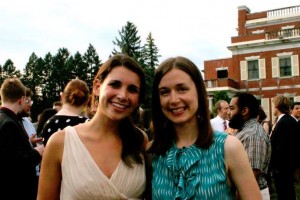 Elizabeth and Kate during graduation week--June 2012--at Mt. Hope Farm.

Elizabeth Greiter worked at the Massachusetts General Hospital's Bipolar Clinic and Research Program in Boston, MA after graduation. She is in her last year of a joint JD/MBA program at the University of Michigan, and after graduation, she plans to practice law at Dorsey & Whitney in Minneapolis.

Kimberly Holachek received her Masters in Social Work from Columbia University School of Social Work. She is currently working as an Egg & Sperm Donor Coordinator at California Cryobank in Manhattan, NY.