At a blistering 8:55am, we met in the front of Terminal Kyoto for our talk on Zen Temples, by Catherine Ludvik. The lecture was quite engaging and interesting, with bits of humor from Ludvik-sensei’s personality showing through on the occasion. After going through a brief history of zen, we specifically went over a few temples, especially Daitokuji, which we would be visiting after her lecture. It was established in 1326, making it a rather old temple (though not as old as Tofukuji, established in 1236 and one of the oldest temples), with a monastic core and 23 subtemples with important tea history and a great art treasure collection. We learned about the sanmon, as well as the symbolism of water in the dragons and waves, incorporated into the architecture in order to spiritually protect the wooden temple from fire. It was interesting here to also see the connection between Sen no Rikyu and Zen Buddhism as well, as Sen no Rikyu served as an adviser and tea master to Hideyoshi. After he contributed to the temple restoration, a statue was put up in his honor, However, in short, Hideyoshi was… not very pleased about this, and in the end, after Sen no Rikyu didn’t apologize, Hideyoshi ordered him to commit seppuku. Sen no Rikyu was the son of a merchant family–he could have cemented his higher position and also created a better path for his descendants, which he did. But, there were some issues in different opinion and other that made his at ends with Hideyoshi, though the supposed cause of his order was that he didn’t enjoy walking under the feet of Sen no Rikyu’s statue.

Luckily, we got to see images in the presentation of halls in the temple, which were really helpful and useful, which I will explain why very soon. Besides this, we also were able to learn about the 100 hanging scrolls , which are old treasures that are aired out in the 2nd Sunday of October every year, if it doesn’t rain. The airing out prevents decay and mold, as well as gets rid of pesky bugs that may have crawled into the scrolls. Additionally originally present in the temple was Tan no Yu’s 83 screen panel paintings, which are quite beautiful, each transitioning into the other. We had an interesting conversation, talking about the use of a well-known contemporary artist to replace the screen panel paintings of temple rooms, or a young, local artist, seeing examples of both. This was a very relevant topic in the upkeep of tradition from Kyoto, as well as how tradition is adopting as time moves forward. In 300 or 400 years, the art we have now will also be known as traditional. What kind of impression will we make to future generations? But the question is more than that. Artists do not necessarily create art, thinking about this sort of thing. Artists create art for the now.

And then, we went to Daitokuji. The reason why the pictures were so helpful in envisioning the rooms of the temples was that many parts of the temple were simply not open. However, we were able to see the famous rock garden (unfortunately, no pictures allowed!), where we sat down and relaxed for a bit, enjoying the weather and looking out onto the rock mounds, the particular scene which symbolized the freedom from the material world of desire. While pictures weren’t allowed, here’s a picture of a tree from outside, which was pruned to resemble those from Chinese paintings… 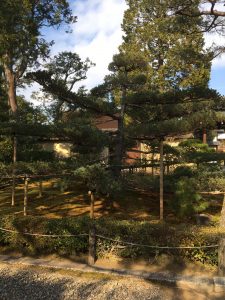 Afterwards, we proceeded to Izusen, where we had reserved for a Buddhist vegetarian lunch. DELICIOUS. I don’t actively search to eat vegetarian cuisine, though I try to eat less beef, but this was a delicious lunch of various courses. We learned that the bowls were stackable, in a set of 7, so that monks could take the bowls to beg, and the stackable-ness contributed to ease of packing, essentially. Here’s a picture of what first greeted us at the table. We were to first drink the matcha, then eat the warabi-mochi, and have the “first drink” from the small, white cup, which was a kind of yuzu honey vinegar. 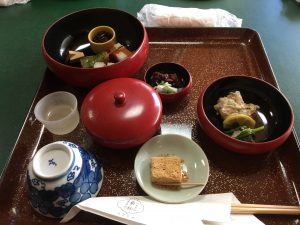 We had some free time afterwards, and we decided to take a small walk with some classic Coolish ice cream after taking a crowded bus back to the Terminal Kyoto area.

For our second activity of the day, we met Gakyu Miyamoto, a Buddhist sculptor. His story is a bit different from some other artisans, in that many had experience in studying for 4 years and then finding a master, but at 25, he didn’t have much experience, and thus needed to try hard in order to become the artisan he is today. He seemed to have quite a bit of business though, as we went around the room, and he spoke about many of his sculptures that he brought in, a large amount of them being commissioned for a temple, or family, or other. While we went over quite a few sculptures, one of my favorites was the blue camellia flower. The camellia naturally does not have a blue color–thus it is a color that does not exist in real life. However, the camellia itself is rendered realistically, at the point in time where all the petals are about to drop at once, as signaled by the single petal on the ground. This point of impermanence, as the camellia is near death, is an important symbol in Buddhism. The sculpture is typically displayed at the alcove over a team room. 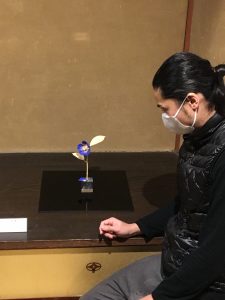 Another in-process sculpture I enjoyed was the sculpture that he was currently working on, made up of 6 blocks of wood that were glued together. This would be chiseled, then after approximately 80% was done, it would be sawed through, hollowed, and put back together. The hollowness can prevent cracking, but also makes it light, so that it can be carried out in case of fire. In restoration, one may find many pieces of history inside the statues, from locks of hair, to teeth, to letters, explaining why such a situation has come to be. Additionally, there needs to be specific ceremonies for the process of making the statue, including a ceremony for the first chiseling to connect with the statue and pray for its safe completion, and also the ceremony to put one’s heart into the statue (and thus saw it through), and another to take the saw out so as to not hurt the Buddha. We could see the first chiseling on the corners of the blocks. 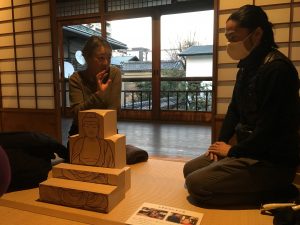 It was also great seeing a very special piece of his–the Maria Kannon, which is related to hidden Christians from the past, who would pretend that they were praying to Kannon, but practice Christianity instead. What was more, this was his engagement piece to his wife! It was very heartwarming to see, with the stones from what would have been on the ring embedded into the statue itself. Funnily enough, he apparently planned to put one stone for every anniversary, but forgot 2 years in a row.

We ended our day at 6PM, and I broke off to go to Nishiki Market to try Daiyasu, which was a fresh oyster bar. Unfortunately, by the time I went, they weren’t servicing any more people. I missed the explanation a bit, but that was the general jist. I ran in and out of Spinns again, and ate some omurice and pasta at Pomme’s instead, before speeding off to Tokyu Hands with Leah and Joanne, just about 15-20 minutes before closing. I’ll probably take a day to do some shopping! I’m pooped. Gotta work on our presentation, so see you tomorrow!

This entry was posted in kyoto-2018 and tagged buddhist statues, zen. Bookmark the permalink.