Today was an extremely full day. We started out at 9 am with a lecture on Zen by Professor Catherine Ludvik at Terminal Kyoto. Then, after the lecture, we all headed together to Daitoku-ji (one of my favorite places in Kyoto and probably the world), where we walked around for a bit and paid a visit to the garden at Daisen-in before having Shojin-ryōri (an elaborate vegetarian meal) at a restaurant located within the Daitoku-ji temple. We finished off the day with Gakyu Miyamoto, a Buddhist sculptor, back at Terminal Kyoto, before heading to dinner at 6 pm.

The lecture by Professor Ludvik was a lot of review for me from the course I took on Japanese art history when I studied in Kyoto, but she touched on some of the initiatives to bring contemporary art into Zen temples, which was new information, and compelling on a variety of levels. Professor Ludvik particularly highlighted the initiative by a priest called Matsuyama-sensei at Taizō-in in which he brought in a young artist, Yuki Murabayashi to repaint the fusuma-e (door panel paintings) at the temple during a restoration. During this course, I have been thinking a lot about how traditional arts tend to be relegated to certain spaces (the tea room, the Noh theater) and the ways in which traditional artisans have sought to increase their viability by going out, either to schools or, in the case of Dairiku Amae, the tea master, to the Kamo river, in order to bring people into their arts. In this context, the Taizō-in initiative is interesting in that it brought someone who otherwise would not have come in into the temple. This is different to me from initiative’s like the Zen priest Kei-san’s, because Kei-san was still drawing people interested explicitly in tea ceremony or zazen into his temple. Not only has Murabayashi found the experience of undergoing Zen training and painting the Taizō-in fusuma meaningful, but she has also become something of a celebrity. It seems to me that her example could be powerful in bringing more unlikely people into the space.

Professor Ludvik also mentioned the blurring of secular and religious art that occured in Zen ink painting, providing Sesshu’s landscapes as an example. While I had been aware of this phenomenon, particularly the way that at a certain historical point people were becoming priests for the express purpose of training to be artists, it was interesting to return to the blurring of secular and religious in light of the kinds of conversations we have been having. So much in Japanese culture (and particularly art) seems to blur secular and religious and I came to question: is it possible to trace that blurring back to artist-priests?

After Professor Ludvik’s lecture, we hopped on a bus to Daitoku-ji. It is hard to explain why I love Daitoku-ji so much, but I will try. Located in the North of Kyoto, Daitoku-ji is a quiet Zen complex with 23 sub-temples (tatchū). Only three of the tatchū are open year-round, while many of the others have seasonal openings. I have been to quite a few of the tatchū at this point, and every time I enter a new one, it’s like walking through a gate to a new treasure chest of calm. Many of the tatchū have splendid zen gardens. While most of the tatchū were closed today, though, I did visit Daisen-in, which has an amazing kare sansui (dry rock) garden, and aside from that, just walked along the cobbled and gravel paths, knowing that there are experiences and memories hiding behind so many of those closed gates. The air even smells better there.

After a delicious vegetarian lunch, we headed back to Shijo area, where Terminal Kyoto is, and had the opportunity to meet Gakyu Miyamoto, a Buddhist sculptor. Miyamoto-sensei started out as a clothing designer, before switching over to Buddhist sculpture, and he noted that his sculpture is identifiable for its particular attention to the folds in the robes. He does a combination of sculptural restoration and original work.

He emphasized his admiration for the Kamakura-era sculptor Kaikei, recounting that he lost his ability to work for a long time after seeing Kaikei’s sculpture of Miroku in a museum. He was only able to regain his ability to work after realizing that Kaikei was spectacular in his context (the Kamakura period) and that he himself needed to figure out how to be spectacular and avant garde within the context of the Heisei period (the one we’re in now), while still adhering to the stringent rules of Buddhist statuary, if he wants to stand out. He decided that the particular characteristic of the Heisei is access to information, and that he would use his access (particularly to the work of Western sculptors) to inform and improve his work (focusing on the clothing as that is where the rules give the most leeway). I found the desire to be avant garde within a traditional art and Miyamoto-sensei’s journey to understanding his place in art fascinating.

Miyamoto-sensei also mentioned his state of mind still comes out, even when he is sculpting according to very strict rules, so he chooses what to work on based on his emotional state. He emphasized that there is no editing in sculpture. These comments are strikingly similar to those that Takabayashi-sensei, the Noh performer made about how the personality of the performer always comes out in performance. However, while Takabayashi-sensei emphasized that the Noh performer should therefore live a Noh-like lifestyle, Miyamoto-sensei instead said that he adjusts his work based on his mood. I think this is most reflective of the differences between the art forms, but it is still interesting to compare the ways in which artists manage ego in forms that attempt to erase ego almost altogether. 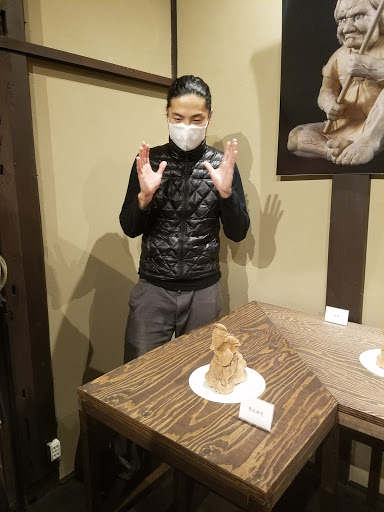