Today was a long day. Our schedule started by arriving at Terminal Kyoto at 8:55am for a lecture on Zen temples of Kyoto given by Catherine Ludvik. Overall, it was incredibly interesting. We started by learning a lot about Zen history and stories. We learned about how Zen became popular in Japan and although I had learned about a lot of this background in my ARTH 103 Asian Art History Survey class and much of the stories where touched on in our readings, I still hadn’t heard of many these stories in over three years so it was nice to learn about them again. It was also great to learn the history of a spiritual theme that has affected so much of what we’ve seen and studied in Kyoto and it helped me contextualize a lot of what we’ve learned. Catherine Ludvik was incredibly knowledgeable in Zen and given that she’s originally from Canada, it was helpful that she could give us appropriate Western analogies so we could better understand Zen. It was also a timely lecture as we learned about Daitokuji and then after the lecture, were able to go visit! 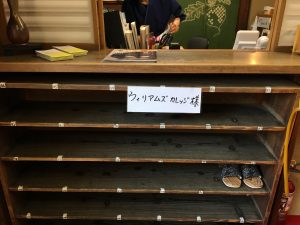 Daitokuju was large and although most of it was understandably closed off to tourists, simply walking around and seeing whatever we were allowed to see felt nice. We all sat down for lunch at Izusen which was lovely. The food was amazing and it was a great way to get a sampling of Japanese vegetarian cuisine. Also, as these were meals that monks ate, it was cool to get a glimpse into the diet of a monk. Afterwards, we headed back towards Terminal Kyoto and were able to simply walk around in the area as we had time. After some time, our meeting with Gakyu-san, the Buddhism sculptor, started. 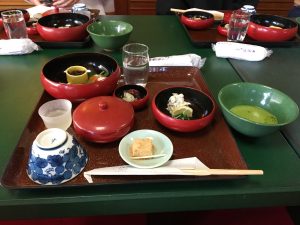 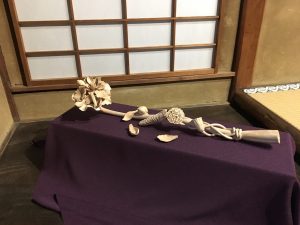 We had all seen many of Gakyu-san’s sculptures before. They are around Terminal Kyoto so, for example, when we had gotten to Catherine Ludvik’s lecture early that morning, we had spent a few minutes going through Gakyu-san’s sculptures that are downstairs. It was great to meet the man who had made those very sculptures that afternoon. He started by apologizing for not being able to meet us on the 13th as he had influenza. We all understood, but it still surprised me when he told us that in the Renzai school, it is seen as a punishable weakness for someone to get sick. He then proceeded to give us an introduction of himself, which I enjoyed listening to. He had gone to college to study design of specialty clothes, where he spent 5 years and graduated at 25 years old. He had no experience with sculpture design after he graduated, but he spent 9 years in training hard to become a sculptor. He is also very grateful that he did have a background in fashion design because it has helped him make something out of zero, which is often difficult for craftsmen. Later, when he was showing us the sculptures he had made, this was evident in how beautifully and creatively everything was designed and created. It was also interesting to see how creative he was within many of the confines of design he was given. Buddha sculptures, for example, have a strict set of rules they must adhere to in designing it. For example, Gakyu-san can only show his artistic creativity in aspects such as the facial expression and clothes, and this is something that his design background helped a lot in.

After meeting with Gakyu-san, most of us went to get dinner at the same revolving sushi restaurant we went to on the first night and then made it back to the hostel. I am particularly excited as I think about tomorrow because we get to meet Amae Dairiku, who I’ve read so much about, and learn about the tea ceremony.