Lecture on Zen and Miyamoto Gakyu

We left at 8:25 AM today on a 20 minute walk to Terminal Kyoto, where we given a lecture on Zen Buddhism by professor Catherine Ludvik. Her lecture gave us a lot information on Zen monasteries and art. It was interesting to learn that even though the traditional Zen monastery had seven halls, all zen monasteries in Japan now have less than seven halls. This is due to the many fires that occur in temples. When the temples were rebuilt, the halls that were burnt were often combined together. The mountain gate (sanmon) hall of zen monasteries often have waves and dragons to protect the temple from fire. Dragons in Japanese culture are water based, as opposed to the fire based dragons of western culture. The frequency of fires in temples made me think, why don’t they use fire retardant treated wood for renovations of temples.

We will be able to experience a tea ceremony tomorrow. Coincidentally, professor Ludvik told us a story about Sen no Rikyuu’s death. Sen no Rikyuu patronized the construction of the second story of the mountain gate of Daitoku-ji. He also ordered the construction of a statue of himself, which was placed on the second story of the mountain gate. Hideyoshi, the shogun at the time, did not like the statue being placed there, as it symbolized that Sen no Rikyuu was at a higher position than himself. Hideyoshi asked Sen no Rikyuu to relocate the statue, but he refused. In response, Hideyoshi put Sen no Rikyuu on house arrest and eventually ordered him to commit seppuku a year later. It is theorized that Hideyoshi was in bad terms with Sen no Rikyuu and used the statue as an excuse to kill him. I was moved by the tenacity of Sen no Rikyuu, and look forward to the tea ceremony tomorrow.

After the lecture by professor Ludvik, we went to Daitoku-ji. There was not much time between the visit to the temple and lunch, so I chose to walk around and enjoy the scenery instead of visiting a sub temple. After the visit to the temple, we ate at a vegetarian restaurant called Izusen. The meal consisted of food that monks typically ate, which was very foreign to me. To my surprise, everything was delicious, and the meal was definitely the best I’ve had in Kyoto. My favorite was a mochi dish that was covered with a green sauce. I do not know the name of it, but I’ll definitely be looking for it as I wander around Kyoto. 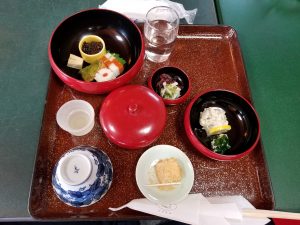 We headed back to Terminal Kyoto to meet with Gakyu Miyamoto, a buddhist sculptor. He has a unique background as a fashion designer before learning how to carve Buddhist statues. With his unique background, he was able to create many new works of art. He spends half of his time on repairing and half of his time carving new works of art. Miyamoto-san believes that it is important to combine the technical skills of crafting and the creativity of art. He showed us many sculptures as a part of his his private exhibition, and I was fascinated the most by his sculpture of an azalea. The leaves of the azalea sculpture was vibrant blue, which does not occur naturally. He wanted to capture the moment right before the petals fall off, so the sculpture included one fallen petal, because azalea petals usually all fall off at once. The sculpture required tremendous technical skill to carve, because the leaves were thin enough for light to shine through it. In addition, the veins of the leave were thinner to enhance realism. The creation of the sculpture utilized both his background as a designer and as a Buddhist sculptor. 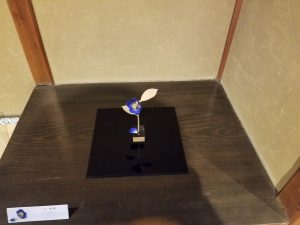