Yesterday morning (Kyoto Day 9: Presentation Day), I woke up pretty late and went on a run on my favorite route up north on the Kamo River. After grabbing a quick konbini (convenience store) onigiri (rice ball) lunch with Sohum, we headed to Terminal Kyoto to practice our presentations for the evening. When we finished practicing, we had a short break before the real presentations started, and then after we presented we had a lovely catered dinner.

Practicing the presentations was particularly time-consuming because we had to work with the interpreter, Mitsue-san, to make sure that all of the translations made sense and that alternating with her went smoothly. I had never spoken with an interpreter before, and while it was a little difficult to adjust, I think overall it helped me express my thoughts more clearly and also pause more and not get carried away while speaking, which was positive.

It was so nice to have most of the people who had welcomed us to Kyoto (artisans, professors, etc.), as well as many people we hadn’t met before, come out to support us. At dinner, I got to exercise my Japanese and talk to a bunch of the guests as well as to chat with the Zen priest, Kei-san, and the Noh performer Takabayashi Shinji-sensei. I spoke with two people, Taisuke-san and Mayumi-san, who were locals who had come out because they were interested in what we had to say (and, at least in the case of Taisuke-san, because he was friends with Sachi-san). Mayumi-san explained that she was interested in why exactly foreigners were so interested in Japan, a country that she views as destructive of individuality to a fault. It was challenging but rewarding to attempt to explain my own motivations to her. It was also fun to get to talk to Kei-san (Takabayashi-sensei was less talkative) in a more casual environment.

My run was really great. The Kamo is one of my favorite places to run, ever. Cutting through the chilly air with the beautiful northern mountains in front of me, huffing and puffing, it is impossible not to feel rejuvenated. 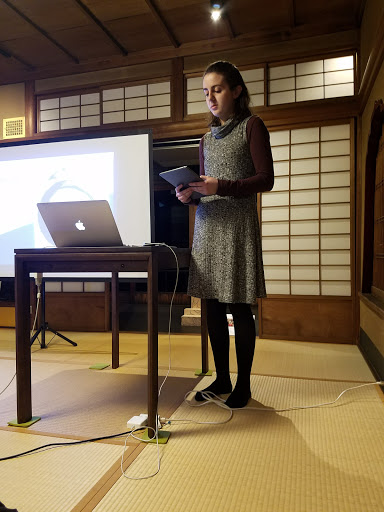 Psyched to present about Zen!