We set off this morning at 9:30 to meet Dairiku Amae, the tea master, at a shrine at Teramachi Marutamachi, in the heart of the city, to gather water for tea ceremony, and went through many steps (and buses) before finally experiencing the ceremony and leaving his home at 4:30. In the morning, we accompanied Dairiku-san while he gathered water, bought matcha, took a bus, bought sweets, took another bus, and arrived at his house. Before having lunch, we sat down and Dairiku-san passed around six objects he had found or purchased that had moved him. We each took the time to examine these objects. After we had finished, we learned the posture for examining tea objects (straight back, bending down chest first, placing the objects down six tatami bumps in front of us) and examined the objects that would actually be used in the ceremony. Then, we went out for lunch.

We split into two groups for the actual ceremony, and I got to experience it twice, first as a guest, and second as an observer. To start the ceremony, we entered the room one at a time, as if we were actors in a play (which we kind of were), and took a couple of times to examine the flower in the alcove and the rest of the room before sitting down for the ceremony. The ceremony started with the presentation of the okashi (sweets), which were hot. Once we ate them, Dairiku-san began the preparation of tea with the careful, rehearsed movements emblematic of those trained in tea ceremony. He presented a bowl of whipped matcha to each of us, and instructed us to lift the bowl and offer some gratitude silently before drinking it.

After the ceremony, Dairiku-san took questions. Sohum and I had been in charge of researching tea ceremony beforehand, so we had some questions prepared, largely about access to and standardization of tea ceremony and the socio-political implications of that access, as well as some personal questions about things like why he had chosen to study at the Urasenke school as opposed to any other. It became pretty clear early on that Dairiku-san was thinking about his accessibility initiatives differently than I had been. Dairiku-san has an initiative called Kamo-cha, where he brings his tea ceremony supplies to the river and shares the tea experience with passers-by. I had been thinking of this as an innovative political move. Tea ceremony practice is largely limited to dedicated men and upper- and middle-class women these days, so to bring it to anyone walking along the river seemed subversive. When we asked him about it, though, Dairiku-san emphasized that his goal was to bring his philosophy of the tea ceremony, awareness of the moment and heightened attention to the senses, to people walking alongside the beautiful scenery of the Kamo River. It seemed like from his perspective, modernizing tea ceremony means making people appreciative of the ideas behind tea as opposed to training them in the rote act.

On the other hand, though, Dairiku-san emphasized the necessity of both the rote and prescribed motions of the tea ceremony and the engagement of the guests in order to be able to achieve creativity and spontaneity. He explained that because the tea ceremony is ideally performed in near darkness, so that the guests’ non-sight senses are heightened, it is important that the master be aware of his body and able to perform the ceremony by memory and touch. Additionally, he explained that if the guests know the ceremony, they can enter into a conversation with the master that makes it easier for creativity to arise in the interstitial fluid between individuals. Going back to the dark for a second, Dairiku-san discussed the way that boundaries between individuals, as well as between people, objects and space dissolve in the dark. He also discussed the importance of shadows to Japanese arts and crafts and bemoaned that the modern day has lost its shadows and appreciation of darkness. He described performing the tea ceremony in the dark as a kind of shared Noh mask, where everyone shares limited vision, and thus are forced to enter into a multi-sense non-verbal communication with intense awareness of everything around them. Obviously I have not totally processed everything Dairiku-san said about darkness, but I found it all very thought provoking.

There were a few interesting parallel’s in Dairiku-san’s explanations to the other people we have interviewed this week. The first was his emphasis on the importance of action over words. He noted that the power of tea ceremony is “wordless,” which was very similar to what the Zen priest Kei-san explained (ironically) about grasping Zen koan, and the Noh performer Takabayashi-san’s insistence than Noh should be experienced without following along on a script, as a visceral experience. Additionally, Dairiku-san explained the idea of 点前（てまえ – temae), or “point in front,”the kind of active meditation involved in tea ceremony in which the practitioner focuses on the point and task in front of them. The idea of 点前 reminded me of the focus espoused by Takabayashi-san in the performance of Noh. 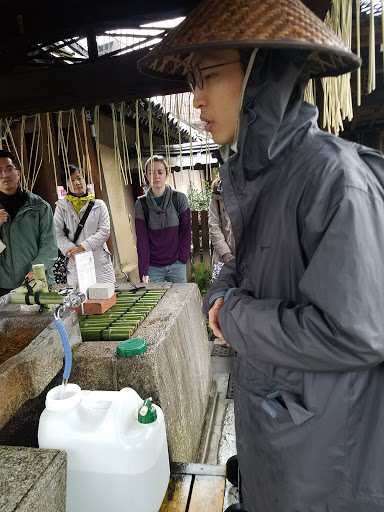 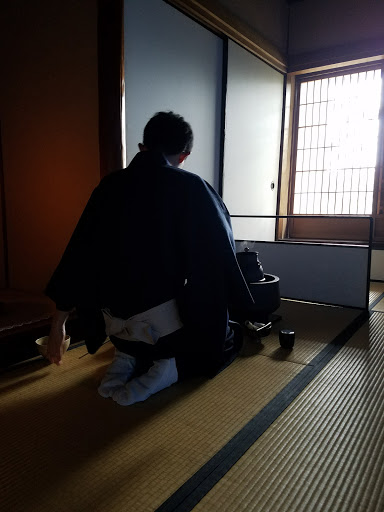 Dairiku-san and his shadow during the ceremony 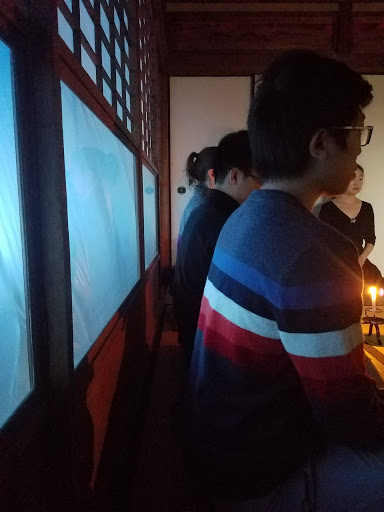 This entry was posted in kyoto-2018 and tagged Dairiku Amae, tea, tea ceremony. Bookmark the permalink.