Today we all went to watch 6 hours of Noh plays. For those unfamiliar with Noh, it is a traditional Japanese theater form that involves a very high level of artistry and has links to Shinto and Buddhism. As I mentioned yesterday, the set of plays we watched included three Noh and one Kyogen, as well as a special first play called Okina, which is more of a ritual than a play and is performed very rarely, including at the first performance of the new year. The first N0h was Yumi Yawata, a deity play about an old man who turns out to be a Shinto god bringing a bow to the emperor at a spring festival. Then came the Kyogen interlude, which was about a young man making the first ceremonial visit to his father-in-law, who gets duped into thinking he should act like a rooster, but the father-in-law plays along so it’s all OK. The second Noh was Tōboku, a women play about a monk having a dream where he encounters the spirit of the poetess Izumi Shikibu in a plum tree, and the final Noh, a finale noh called Iwafune, was about a dragon god bringing treasures and protection in a stone boat.

I had the expectation, based on various conversations I had, that Noh theater would probably put me to sleep. While I almost nodded off a few times, I managed to stay awake through the whole six hours though. The aspects of Noh that make it sleepy are the slow deliberate movements, the incomprehensible (even for Japanese people) classical Japanese speech, and the continuous rhythm of drums and flute. I will admit, there were some points at which I was bored to the point of frustration. However, it was the parts that I had some context for from our lecture yesterday that I found the most interesting. For example, I felt that I could better appreciate the intricacies of the drum rhythms and the structure of the dances. In some of the introductory instrumental sequences for characters, the changes in rhythm that signaled impending entrance were subtle to the point of being atmospheric, and it was cool to be able to notice them.

Additionally, being able to appreciate Noh more after a two-hour contextual lecture makes me understand how some people come to love Noh through learning about it. I came out of the performance with a lot of questions like: is there any significance to the colors of the costumes and if so what is it? Why do the drummers sit on the ground for some plays and on chairs for others? Are the Kyogen interludes to summarize plays in the middle original to Kan’ami and Zeami’s Noh or were they introduced later on to catch people up who got lost or fell asleep? I’m sure I’ll get answers to some of these questions later in the trip.

When we left the Noh theater at 5:00, Sohum, CJ and I went to Loft, where I restocked on  pens and pencils in the stationery section, and then Uniqlo (it’s in the same building, you know). After that, we went to an excellent tempura restaurant across the street from the hostel and had some great plum wine. 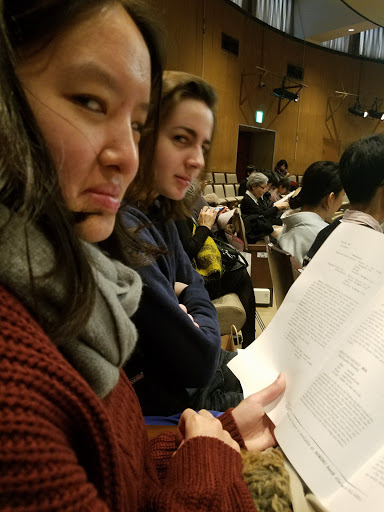 Ready for a full day of Noh theater!

This entry was posted in kyoto-2018 and tagged noh. Bookmark the permalink.