Every successful revolution gives way to rituals, ceremonies and habits whose purpose is to reproduce the excitement and hope of those long-ago days of protest.  Outside of old statuary in places like Lexington and Concord, American fervor against the British has, for the most part, been tamed by family-friendly parades, fireworks, and an impossible array of fried food (see, for example, this:  https://www.thedailymeal.com/eat/texas-state-fair-announces-10-finalists-2017-big-tex-choice-awards/081617).

In a country like Iran, however, fun has to contend with earnestness.  The revolution lies too close to the present, its fate still uncertain.

For this, the annual performance of the Air Force officers’ salute, now made for Khomeini’s less-charming successor Ali Khamanei, is not by accident. Like the numerous murals, print images, and porcelain plates (no kidding) of Khamanei and Khomeini in mutual profile, the IRI seeks to “bottle the magic” of Khomeini’s charismatic leadership in its current Leader.

Some historical background: On February 8, 1979—seven days a er Khomeini’s return to Iran a er more than 14 years of exile and three days before the final triumph of the 1979 Revolu- tion—a group of Air Force o icers declared their allegiance to the revolutionary cause, the first large-scale defection of military personnel to occur during the uprising against the Shah’s regime. What makes the event, captured in the first image above, particularly compelling is that the o icers went to visit Khomeini at his then-headquarters, housed in Alavi High School in central Tehran.

Khomeini’s remarks to the o icers on that day included the following: ”Till now you had been in the service of the wayward, but have now returned to the way of the holy Qur’an. May the holy Qur’an be your Guardian and Protector, and hopefully, with your support the people of Iran will succeed in forming the government of Islamic justice.”

The occasion proved to be a major turning point in the revolutionary process. The Royal Iran- ian Air Force, the Shah’s favored branch, in many ways embodied both the putative strength of the old regime and its excesses. The air wing of what was then the region’s largest (by far), its formidable arsenal of state-of-the-art weaponry included over 200 F-4′s, some 60 F-14′s, with at least 20 more F-14s and 160 new F-16s on the way, courtesy of the United States. If posses- sion of American-made fighter jets represented the modernity, both good and bad, of the Pahlavi regime, then it is perhaps fitting that the startling image of air force o icers saluting Khomeini before the end of the revolutionary process has since become one of the most iconic images of the revolution. 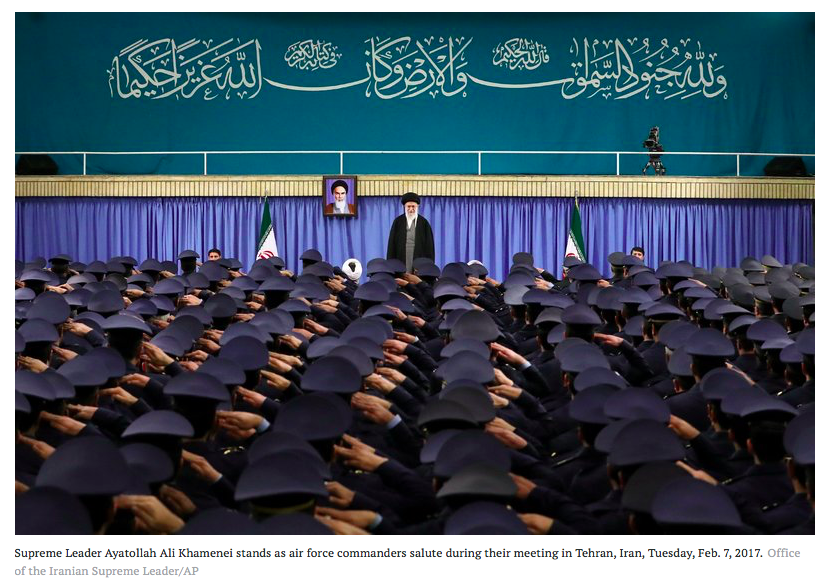 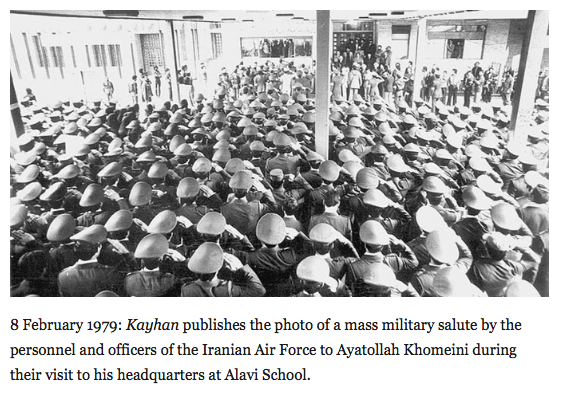