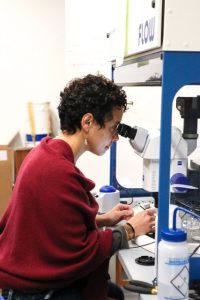 Phoebe Cohen is an Associate Professor in Geosciences at Williams College. Phoebe is a paleontologist who utilizes a wide variety of microscopic and microchemical techniques, combined with data from field-based stratigraphy and sedimentology, to reconstruct ancient organisms and ecosystems.  In essence, she studies tiny fossils to help reconstruct ancient organisms and ecosystems (mostly from the Neoproterozoic Era, before the rise of animals).

Phoebe was born and raised in Newton, MA. She received her undergraduate degree in Earth Systems Science at Cornell University and then spent two years working at the Museum of the Earth in Ithaca, NY where she nurtured her dual passions for paleontology and education. Phoebe received her PhD in the Department of Earth and Planetary Sciences school at Harvard University in 2010, and then spent two years as a postdoctoral fellow at MIT where she was also the Education and Outreach Lead for MIT’s NASA Astrobiology team. Phoebe began her position at Williams in 2012. At Williams, Phoebe teaches courses in paleontology, geobiology, earth history, and STEM identity. She is actively involved in justice, equity, diversity and inclusion work in her discipline, at Williams and beyond. Her research is funded by the NASA Astrobiology program, The American Chemical Society, and The National Science Foundation.