↓
Home→Explore the Era→Polyphonic Music Notation in 1487
Polyphonic Music Notation in 1487
Late medieval polyphony, like the music Obrecht wrote in Missa de Sancto Donatiano, required a more sophisticated notational system than the square notation of plainsong. Polyphonic music consists of two or more simultaneous, independent melodies. For these melodies to be aligned correctly, each singer must know his exact pitches and rhythms. Since at least the 10th century, composers placed notes on horizontal lines to indicate pitch, and in 1030, the Italian monk Guido D’Arezzo – often credited with the development of our modern musical staff – famously described a four-lined version of this system in the prologue to a book of antiphons called the Aliae Regulae. Guido’s writings, including the Aliae Regulae, were widely disseminated, and from that point forward the musical staff was the standard method to notate pitch in both monophony and polyphony.

The notation of rhythm proved more complicated than the notation of pitch, and it continued to evolve in the centuries before Obrecht’s time and beyond. Beginning in the 12th century, theorists had attempted to solve the problem of notating rhythm using a system of “rhythmic modes”, using ligature shapes derived from the square notation of plainsong to convey patterns of long and short notes that created a rhythmic structure similar to the meter of a poem. But this system was restrictive for composers who wanted to write more complex rhythms. In the mid-13th century, the German music theorist Franco of Cologne described a better solution, using used the shapes of individual notes rather than ligature patterns to indicate various lengths as we do in modern notation.

This solution formed the basis of the polyphonic notation system that Obrecht knew – white mensural notation. “White” refers to the open note heads that replaced the black notes of earlier systems, and “mensural” designates the notation as musica mensura, or measured music. Unlike plainchant, white mensural notation was written on a five-lined staff, with one of three clefs to indicate the position of either C, G, or F:

White mensural notation employed eight types of notes, each with a different rhythmic value: maxima, longa, brevis, semibrevis, minima, semiminima, fusa, and semifusa. It is clear from the shapes of the notes themselves that these were precursors to our modern notation.

In creating modern transcriptions of medieval polyphony, the white mensural notes can be transcribed as the modern notes that physically resemble them – the semibrevis looks like a whole note, the minima looks like a half note, etc. (scholarly editions of early music now favor this approach). But because so many increasingly small notes have been introduced over the years, it has also become common to use reduced values. In this system the brevis is equivalent to a modern half note, the semibrevis is equivalent to a quarter note, etc.:

In addition to individual notes, ligatures were used to represent combinations of pitches. Within ligatures, the presence or absence of stems and the placement of note-heads indicated combinations of long and short notes. An example of ligatures drawn from Obrecht’sJacob Obrecht was a South Netherlandish composer known mainly for his substantial output of Mass Ordinary settings in the late 15th century, as well as for his motets and songs… Missa De Sancto Donatiane is shown below, along with its transcription into modern notation; this is the opening of the bassus part from Kyrie II as it appears in the manuscript Jena, Universitätsbibliothek MS 32, f.181vThis manuscript includes fifteen Masses and one Credo, requiring 282 paper folios. No composer attributions are provided in the manuscript, but concordances allow the identification of one Mass each by Antoine Brumel, Loyset Compère, Johannes Ghiselin, Johannes Martini, Marbrianus de Orto, and Matthaeus Pipelare, as well as two each by Josquin des Prez and Obrecht….

Unlike in modern notation, the relative durations of these notes were not fixed. Instead, they were dictated by the mensuration of the piece – the division of the music into regular rhythmic units of two or three. Throughout the Middle Ages, the preferred division of music was into groups of three, a tendency often explained by contemporary theorists in Trinitarian terms. Thus, whenever a ternary relationship existed in music, it was referred to as “perfect”, while binary relationships were called “imperfect”. The mensuration of a given piece could theoretically dictate perfection or imperfection at the level of each of the four largest note values, but in practice composers typically only dealt with mensuration at the level of the breve and semibreve. The mensuration of the brevis was called tempus. Tempus perfectum meant that there were three semibreves to each brevis, and it was indicated in manuscripts by a closed circle. Tempus imperfectum meant that there were two semibreves to each brevis, and it was indicated by a semicircle that opened to the right. Similarly, the mensuration of the semibrevis, called prolatio, could be perfect or imperfect. Prolatio perfectus, also called prolatio maior, was indicated by a dot in the center of the tempus sign, and prolatio imperfectus, or prolatio minor, was indicated by the absence of that dot. The four main mensuration signs were thus:

In Missa de Sancto Donatione, Obrecht typically uses prolatio minor, or a duple relationship between the minima and the semibreve, alternating between tempus perfectum and imperfectum.

This mensuration system and its symbols form the basis of our modern time signatures. To this day, the open circle of tempus imperfectum cum prolatione imperfecta, which we now read as a “C” for “common time”, indicates a fully binary relationship – 4/4 time. In Obrecht’s day, a vertical line through that sign indicated the same mensuration at a faster speed; in some contexts it signals doubling the speed, just as today it indicates our “alla breve” or 2/2 time. A good example of this can be seen in a modern transcription of the Gloria from Missa de Sancto Donatione. All four voices begin with the same note value, but the voices with the cut mensuration sign proceed at double time compared to the third voice. 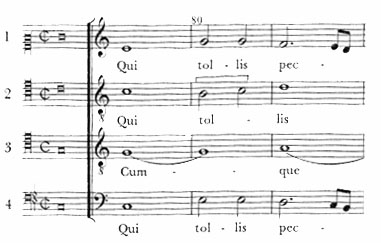 Obrecht and his contemporaries could indicate more complicated alterations in the mensuration of a piece in a variety of ways. For example, “coloration”, or blackening of the white note heads, indicated diminution of each note length by one-third of its value. Numerical fractions also instructed performers to either increase or decrease note values in a specific ratio.

Polyphonic manuscripts were not structured like modern scores, with each part aligned above the others; instead, each part was written in its own portion of the page, requiring performers to hear rather than see how the parts fit together. Here, for example, is the opening of Obrecht’s Kyrie from the Missa de Sancto Donatiano as it appears in the manuscript from which Cappella Pratensis is singing: 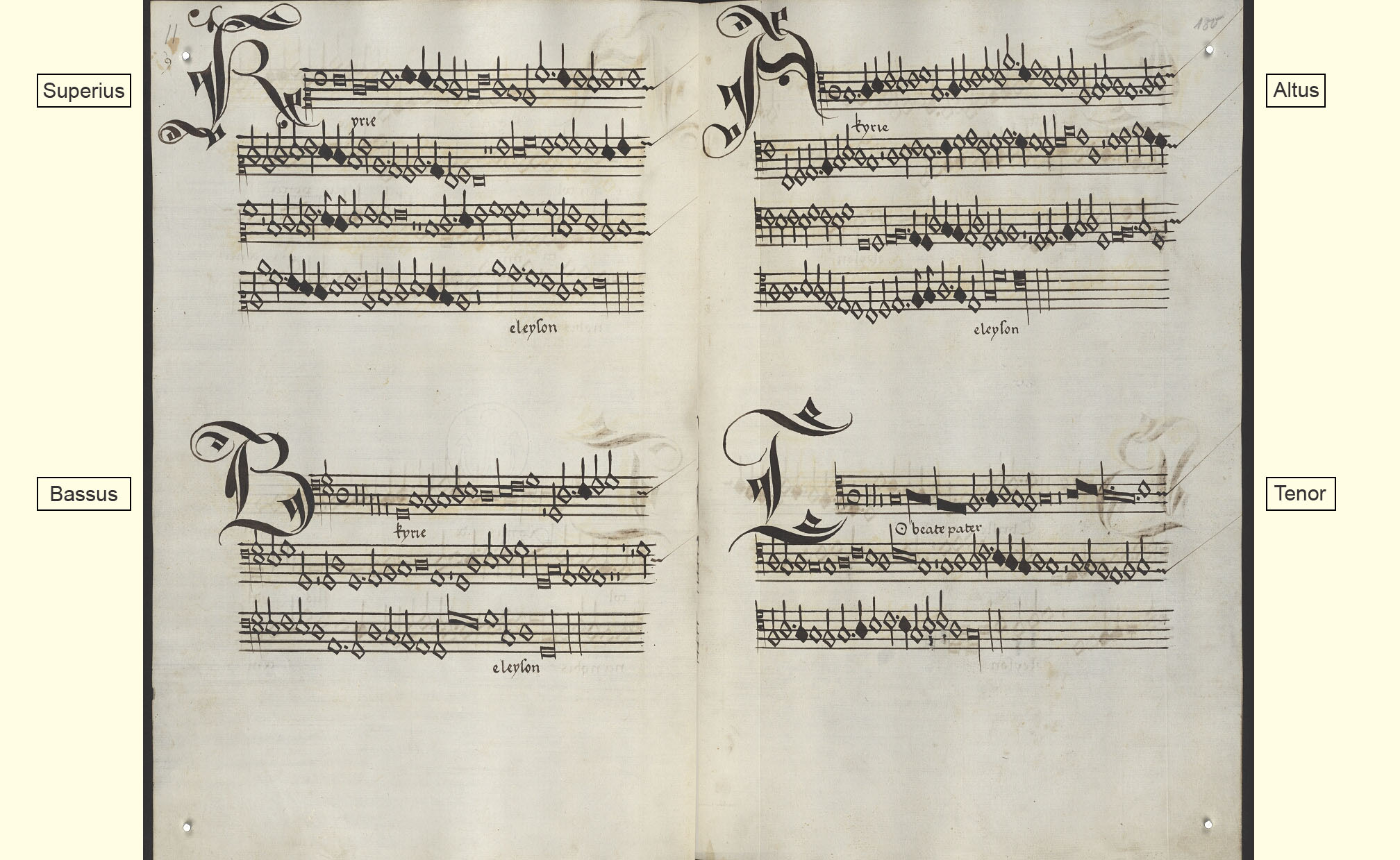