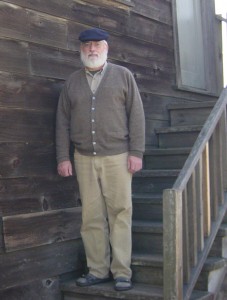 I arrived at Williams College right out of grad school at the University of Chicago in 1977 and taught courses mainly in historical geology, stratigraphy, paleontology and paleoecology through 35 years.  My retirement from teaching came in 2012. A factor that made coming to Williams very attractive was the rich history of geology at the institution. Perhaps more as a hobby, I am interested in the history of geology, especially stratigraphy and paleontology. I have published short biographic studies on several geologists, including Lardner Vanuxem (1799-1863), James Hall (1811-1898), Ebenezer Emmons (1799-1863), and Amos Eaton (1776-1842). Eaton and Emmons are very much associated with the long history of geology at Williams College.

Following my chance discovery in 1984 of an unusually well preserved rocky shoreline of Late Ordovician age near Churchill on the present shores of Hudson Bay, I have been fascinated by the use of geological unconformities as precise coastal markers. My students and I have studied ancient rocky shores of all ages from the Ordovician to the Pleistocene at many localities around the world

The range of possible applications includes: 1) large-scale paleogeographic mapping of ancient shorelines, 2) mapping of offshore facies, using the paleoshore as a datum, 3) documentation of hydrodynamic settings (current indicators) using the paleoshore as a datum, 4) testing of local vs. global models of sea-level change based on burial of paleotopographic relief on ancient rocky shorelines, 5) paleobiology of prehistoric rocky-shore organisms, and 6) paleoecology of prehistoric rocky-shore communities. 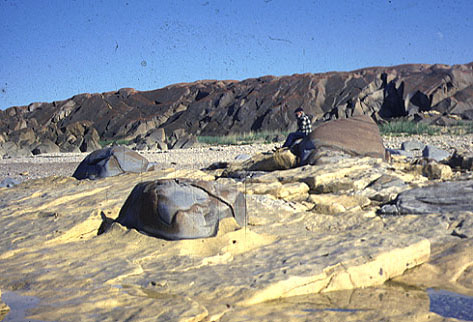 Upper Ordovician rocky shore on Hudson Bay
Since 1990, annual fieldwork has been conducted in Baja California, Mexico regarding rocky shores ranging in age from the Cretaceous to Pleistocene.  In 2009, the University of Arizona Press issue the “Atlas of Coastal Ecosystems in the Western Gulf of California” edited by Markes Johnson and Jorge Ledesma-Vázquez with an interactive computer disk for manipulation of satellite images contributed by David Backus.

An ongoing compilation of bibliographic data on rocky shores  (in addition to focused field projects) remains a high priority.  Research undertaken with Gudveig Baarli has been expanded from former rocky shores to paleoshores of all kinds, including sandy and muddy shores. Our review paper on “Development of Intertidal Biotas Through Phanerozoic Time” was published in the 2012 volume “Earth and Life” edited by John A. Talent (Springer).

My original research as a graduate student concerned Silurian stratigraphy, with a primary focus on tracing evidence for global changes in Silurian sea level. Since coming to Williams, my field work on this topic was extended from the U.S. and Canada to Norway, Estonia, England, Australia, Siberia, and China. Compared to today, sea level during the Silurian (408-438 million years ago) was unusually high. Continental platforms were widely flooded by marine waters and carbonate sedimentation prevailed. Inter-continental comparison of cyclic fossil “communities” on relatively stable continental platforms has been the primary tool for testing the extent of Silurian eustasy. In recent years, this approach has been augmented by studies on Silurian rocky shorelines (see above).

In 1992, I was elected by my professional colleages to the Chairmanship of the Subcommission on Silurian Stratigraphy (a subunit of the Commission on Stratigraphy under the International Union of Geological Sciences). The subcommission consists of 15 voting membrs and 80 corresponding members who are actively engaged in research on the Silurian System all around the world. Running the subcommission is something like directing a small research institute lacking only bricks and morter. The Subcommission meets on a biennial basis. In 1996, I co-convened the 2nd International Symposium on the Silurian System (sponsored by the SSS and held at the University of Rochester, N.Y.). Part of the proceedings of this symposium were published as New York State Museum Bulletin 491 on “Silurian Cycles” in 1998 (edited with Ed Landing). A second part from the proceedings was published in 2003 as New York State Museum Bulletin 493 on “Silurian Lands and Seas: Paleogeography Outside Laurentia.” Other recent meetings of the SSS were held in Australia (2000), Spain and Portugal (1998), Austria (1994) and the Czech Replublic (1992). My term of office ended in 2000.

A grant from the National Geographic Society funded my research on Silurian rocky shorelines in the Chinese Province of Inner Mongolia during July 1999. The principle investigators who joined me in carrying out the project were Gudveig Baarli (Williams College) and Rong Jia-yu (Nanjing Institute of Geology and Paleontology). The highlight of the expedition was discovery of a small continental island with abundant fossil invertebrates preserved as encrustors attached directly to a rocky-shore surface. Only 610 m x 200 m in size, the island core consists of igneous rock (diorite) that dates from the mid- to late Ordovician. Limestone strata dating from the Ludlow Epoch (about 420 Ma) surround the island and dip away from the core in a radial pattern. The encrusting fossils occur primarily on the sheltered (south and southeast) side of the island, where silty limestone abuts against the unconformity. The north side of the island was exposed to much stronger wave activity, based on evidence of a thick basal conglomerate unit composed of diorite boulders.

The island was named “Bater Island” in reference to Bater Obo, a well known landmark located about 3 km away from the Silurian island. Bater Obo is, in turn, located about 30 km from the international border between Inner Mongolia (China) and Mongolia. A prelilminary research report on the project was published in the Chinese Science Bulletin in December 2000 (Chinese language version) and February 2001 (English translation). The report documents the first record of an ancient island in China and the first report worldwide of stromatoporiods as members of a rocky-shore community. A follow-up paper on the precise age of the fauna (based on conodonts) and the relation to Silurian sea-level patterns is found in the October 2001 issue of Geology. 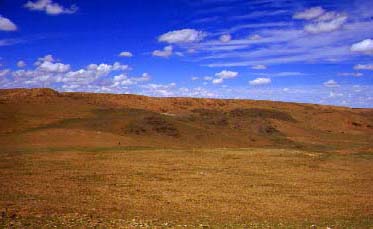 Since 2009, Markes and Gudveig have co-operated with a team of paleontologists from the University of Lisbon (Portugal) and University of Huelva (Spain) on rocky shores and Miocene to Pleistocene limestone deposits in the North Atlantic islands of Macaronesia (including the Madeira, Canary, and Cape Verde archipelagos).   Funding under a grant from the Spanish Ministry of Science and Innovation to project leader Eduardo Mayoral (Huelva) has enabled much of this work.  The project has greatly expanded data on the history of basaltic islands.  Historically, the starting point for this kind of research begins with Charles Darwin on Santiago Island in the Cape Verde archipelago in 1832 at the outset of the famous voyage of the Beagle.  Among other projects, the team has revisited all of Darwin’s localities in the vicinity of Praia on Santiago island and revised the stratigraphy of limestone deposits dominated by Pleistocene rhodoliths (see Johnson et al., 2012) in bibliography.