This summer, I worked at Paradise Dude Ranch in Buffalo, Wyoming, a town about three and a half miles Southeast of Yellowstone National Park. When I was first picked up at the airport by two haphazard-looking men, I had the sudden feeling that I was making a terrible mistake. The road to the ranch was long and winding, we lost cell phone service twenty minutes into the drive, and the nearby mountains, surrounding us in every direction, gave me the feeling that I could never get out, even if I wanted to.

As it turns out, I was not making a terrible mistake, but all those times that I loped across the mesa, got trampled by cows, and fished for rainbow trout in the creek, I did these things framed by the backdrop of The Bighorn Mountains, which never lost their feeling of being powerful and constraining. And every time that we sang the John Denver song “Country Roads Take Me Home” during the weekly ranch sing-a-long, the line, “Life is old there, older than the trees, younger than the mountains, blowin’ like a breeze” stuck out in my mind. As a geology student, I couldn’t help but wonder… how old are all these things, actually? Somehow, I don’t think John Denver had the answer, but I’m hoping to find out a little more about that in this post.

As I drove on the ranch road to Buffalo, part of the reason I felt so constrained is that the ranch is surrounded by the Powder River Basin at the foot of the Bighorn Mountains, which lie to the West. To the East lie the Black Hills. They were out of the view of the ranch but still added to the feeling of being sunk low into the ground and surrounded by uplifted mountains—though objectively speaking, “sunk” isn’t really the right word.

Map of the Powder River Basin

The Ranch’s elevation initially felt significant at just under 8,000 feet. Even higher than that stood the nearby Bighorn Mountain Range—most notably Cloud Peak, which could be seen distinctly from the ranch’s mesa—reached nearly 14,000 feet. The Bighorn Mountains were uplifted during the Laramide Orogeny, a mountain-building event that occurred 70 million years ago during the Cretaceous period. Cloud Peak contains an active glacier that could be seen as a white ice cap from the ranch. It is called the Cloud Peak Glacier and rests on the eastern slope, which is the slope visible from the mesa.

The Powder River Basin was formed when the Bighorn mountains and Black Hills created by the Laramide Orogeny spread away from each other, creating a rift valley that then filled and drained with water  repeatedly throughout its history. The edges of the basin are made up of marine sediment from the Cretaceous period, when the climate warmed, and the area was underwater. Some other significant layers in the rock stratigraphy are a layer of Bighorn Dolomite from the Ordovician, an upper Devonian deposition of limestone, and mostly depositions of different shale formations from the late Cretacious on. Slate  is mudstone that has been metamorphosed, or subjected to a large amount of pressure or heat, which is often found at river deltas. It breaks very easily along its sheets. The shale in the Powder River Basin might have been formed by sediment from the Powder River itself. We didn’t see much of the Powder River at the Ranch; the body of water that impacted the ranch more heavily was the French Creek, which even our saloon was named after! French Creek provided most of the irrigation for the ranch, and runs along the base of the Bighorns. A stratigraphic section of the Powder Creek Basin can be found at the Wyoming Geological Survey website.

A common type of rock found in this basin is called “scoria” colloquially  known as “red dog,”. It is red from oxidation of iron, which causes the rock to rust. The area is rich in coal, and the coal sometimes burns naturally due to lightening or forest fires. As the coal burns, it “bakes” the red dog rocks and turns them into sturdy structures that are more resistant than usual to erosion. This phenomenon probably contributed to the amazing rock structures that could be found around the ranch and the rest of the basin. Most notably on the ranch itself was Fan Rock, a structure that “fanned out” over one of our pastures. It is reddish in color and is noteworthy for its distinct, jagged edges which are less eroded than the rounded sides in other parts of the mountain. Forest fires are common to the area and led to a great deal of scoria formation in the area. 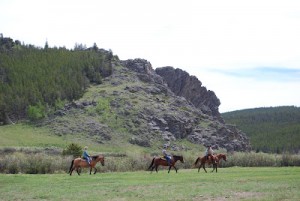 I have referred to the mesa several times—a beautiful, flat patch of land above tree level where we did most of our difficult riding, hiking, and stargazing. Mesas are formed by erosion and weathering, or the wearing away of sediment deposits in uplifted land. Likely, the land that composes the mesa was uplifted by the Laramide Orogeny, but over time, the softer layers like the shale were eroded away, leaving the stronger rocks like the baked red dog. The strong rocks flattened out over time, leaving the great expansive mesa in its wake. The mesa showed evidence of “cliff and bench” topography, or areas of gradual higher and lower elevation due to differences in rock types.

Fossils are quite common in Wyoming and in the Powder River Basin. In “Late Ordovician Vertebrates from the Bighorn Mountains of Wyoming, USA,” Sansom and Smith discuss having found fish fossils in the Bighorns from the Ordovician. During the Paleozoic, when Wyoming was covered by a shallow sea, many ancient marine animals lived there and are now fossilized. You can even find dinosaur fossils in this area! Since the sea level was constantly rising and falling, it created an atmosphere conducive to fossilizing organisms, mostly because of the shallow water.

On Paradise’s website, a famous author, Owen Wister, is quoted as saying, “Finally, there was Paradise Ranch, an obvious platitude when read from a map, but something quite different when you arrived there at the end of a hard ride. It lay tucked away on the far side of a high peak, as any proper Paradise should.” Although I disagree, from the standpoint of a geologist, that Paradise is a “platitude,” on a map, there are certainly some aspects of the Powder River Basin that are awe inspiring in person because of its unique geologic history.

http://www.paleoportal.org  (Created by the University of California Museum of Paleontology, the Paleontological Society, the Society of Vertebrate Paleontology, and the United States Geological Survey).