Rocks enjoy a special distinction in New Hampshire. Our official nickname is the Granite State, and our license plates and state quarters proudly display the rocky features of the Man on the Mountain (despite the fact that he’s been gone for several years). Not surprisingly, the dominant rock of New Hampshire is granite, a tough rock with visible quartz, mica and feldspar crystals. A walk down my road, as in many areas of New Hampshire, reveals granite fieldstones piled in stone walls, granite mailbox posts, granite front steps, granite foundations, granite countertops… the list goes on.

So where did all this rock come from? If we look back through time far enough, we see the atoms that now make up our planet getting spit out of exploding stars. The heavier elements were made in these massive stellar explosions, called super novae. Our sun formed from the leftovers of other suns, and its gravity slowly collected a swirling mass of cosmic dust. The gravity of the dust started clumping bigger and bigger pieces together, until planets formed. By 4.55 billion years ago, the Earth had taken shape, its core molten from the leftover energy of the planet’s formation. Denser elements like iron sunk deep into the center of earth, while the lighter elements (like those that make up granite) slowly cooled into a crusty surface layer. Currents of magma within the Earth brought lava to the surface in fiery volcanoes, releasing enough steam with the molten rock to begin forming the oceans as it condensed. As the oceans formed, so did the continents. Some parts of the crust became waterlogged and dense enough to slip back down into the Earth’s liquid mantle (the middle layer, between the crust and core). In other areas, upwellings of magma pushed new rock onto the continental crust. Between these two forces, great plates of the Earth’s crust started to shift in a process called plate tectonics, grinding into each other and piling up mountainous continents.

As the plates continued to move across the planet, the patches of continental crust piled into each other, and the continents grew. Geologists term each of the continent bits that slowly stuck together terranes. Most of New Hampshire lies on the Central Maine Trough, a terrane that shoved on to the great-great-great ancestor of North America about 460 million years ago. Way back when this terrane was first added, it was mostly made up of sedimentary rock, the rock that forms from sand and mud that’s been compressed over time.By about 400 million years ago, Laurentia, the great-great ancestor of North America had formed. For a while, Laurentia sunbathed at the equator as the first vascular plants grew on her lands and coral reefs and fishes diversified in the oceans that lapped at her shores.1

However, peace and quiet doesn’t last very long in the geologic timescale. Things got exciting at around 395 million years ago, when another ancient continent, the smallish Avalon, collided with (what is now) New England’s coast. The collision wreaked havoc on the gentle Central Maine Trough’s geology, pushing the crust up into a fantastic mountain range that would have rivaled the Himalayas. The sedimentary rock was put under such intense heat and pressure that it metamorphosed and re-crystalized into gneisses and schists, beautiful sparkly rocks that don’t resemble their muddy sedimentary origins much at all.2

Underneath the uplifted mountains a large pool of magma began to slowly cool, allowing large crystals of quartz, mica and feldspar to form. The magma intruded into the layers above, forming large veins of new rock.1 As Laurentia collided with Gondwana (another ancient continent) to form Pangea (a super continent which included most of dry land on the planet and spanned from pole to pole), some of this new granite began to reach the surface as the inevitable process of erosion tore away at the crumbling layers above it. The muddy sediments washing down off these mountains preserved the footprints of dinosaurs that waded along long-gone lakeshores (They can be seen at this Massachusetts State Park!).

As North America slowly drifted northward to its present location after the breakup of Pangea roughly 200 million years ago, life was quiet in New Hampshire except for the steady tick of erosion. Millions of years passed, and slowly the granite that had lasted so long underneath the mountains was exposed as the more vulnerable peaks wore away.

In the very recent years, as humans first walked across the continents, erosion took on a whole new meaning as several great ice ages scraped the land, the last one retreating only 11,000 years ago. In the White Mountains, grooves in the rock are still visible where boulders carried along by the glaciers etched into the underlying bedrock. On their tops, arctic plants still thrive, their last outpost as the tundra left behind by the glaciers disappeared. Joe English Hill, a nice walk from my house, also bears the scars of the glaciers. The northern slope is gradual as the great sheets of ice slowly flowed up and over, but the southern face is a sheer cliff, the rock literally plucked away as the glacier continued southward. Gravel pits in my town are ancient sand deposits piled up by the glaciers’ meltwater, the rounded rocks way up on the hill evidence of a torrential glacial river that pounded the stones smooth.2

Today, the Piscataquog is a gentle river, not much more than a stream really, that flows over small pebbles. The White Mountains are old, their teeth worn down by years of erosion, no longer the crunched collision zone of two continents. The geography seems stable, except for the occasional rockslide that decimates a state symbol. Yet New Hampshire’s granite reveals a dramatic past that is hard to imagine in the scale of a human lifetime.

2. Caduto, Michael J. A Time before New Hampshire: The Story of a Land and Native Peoples. Hanover, NH: Univ. of New England, 2003. Print.

*This article was not published in a journal, although it is an article, and was posted to a database. It seems to be a summary of Mike Dorais’ work. One of his published articles (that was less readable for me) that contains similar information: 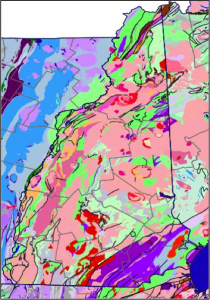 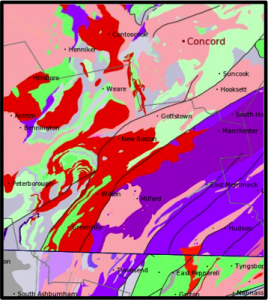 These two maps reveal the bedrock geology of New Hampshire, the whole state on the left and New Boston (my home town!) in more detail on the right. The red is the “Spaulding Tonalite”, one of the four major magma groups in New Hampshire.

Image from the USGS geologic maps by state.