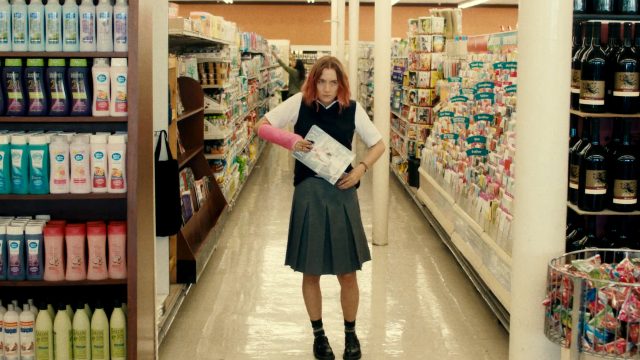 Lately, Hollywood has been called out as rampantly sexist, first as one of its greatest head figures, Harvey Weinstein, was taken by storm and shredded apart by media. His exposure set off a domino effect as a series of men were inducted into the hall-of-fame of sexual harassment.[1] The last domino: men dominate and control Hollywood. Recent film research shows how dominant males have been in the film industry. Notably, of the top 2,000 grossing films by the US Box Office, 78% featured male protagonists and 76% had more than half male dialogue. Movies like Shawshank Redemption, Bottle Rocket, Schindler’s List feature no credited female dialogue at all[2]. Even our beloved Disney princess movies feature far more male dialogue than female dialogue[3]. Women are consistently given less screen time, less dialogue, less content. When finally they are the center of attention — Hunger Games, Tomb Raider, Wonder Woman — they are heavily sexualized or subject to male possession.

Laura Mulvey, in 1975, published her influential essay titled Visual Pleasure and Narrative Cinema, in which she exposed the tendency of film to identify with the “male gaze” and establish a voyeuristic patriarchal order in which females are objects of male desire[4]. Today, over four decades since Mulvey’s essay was published, men still command the film industry. But writers and directors are speaking out against the gender disparity in cinema, creating movies that challenge male domination. The recent hit movie Lady Bird, written and directed by Greta Gerwig, makes a bold statement against the long-standing woman-oppressing culture — it rejects participation in male power and declares that woman-centric perspective is possible in cinema. Gerwig, wanted the film to be a female’s response to the prevailing number of male coming-of-age stories, like Boyhood or The 400 Blows[5]. Lady Bird, a female-driven story, suggests that the male gaze is not at all obligatory and can be dismantled. 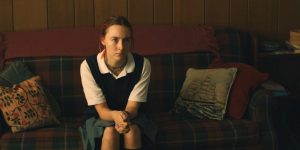 Lady Bird’s female protagonist, Christine, creates a cinematic world that centers on her voice, ambitions and desires. Rattling against conformity, Christine dyes her hair bright pink and gives herself the name “Lady Bird” just because she can. She runs her own campaigns for class president every fall to no avail; she boldly speaks of wanting to be on the math Olympiad despite failing math; she throws herself out of her mother’s car while arguing about going to college on the East Coast. Rejecting passivity, Lady Bird is the force that commands and forwards the story. She pushes back against Mulvey’s argument that females are passive, that their “visual presence tends work against the development of a story line”[6]. The camera never slows down to make Lady Bird’s visual presence the center of attention. Rather, the focus is consistently on Lady Bird’s active presence with her sharp dialogue and ambitious dreams. There are no freezing frames or close-up shots of her body that make her subject to sexualized gazes or which emphasize her to-be-looked-at-ness. Lady Bird is wild and pretty, but she is never framed as an erotic spectacle. Lady Bird commands the stage with her determinism and strong personality rather than visual impact.

In fact, contrary to the male gaze, the film establishes Lady Bird as the active female gazer. She is the one who looks at the world: boys, dresses, pretty Sacramento houses, East coast colleges, Playgirl. The “female gaze” is a term coined by writer and director Jill Soloway in response to Mulvey’s male gaze[7]. It’s a gaze that dares to fight back and return the male gaze. Soloway argues that movies with lead male characters have over time molded audiences into believing that the male-centric patriarchal view of the world is natural world. “Protagonism is propaganda that protects and perpetuates privilege,” Soloway voiced. The female gaze counters this male privilege with female protagonists. “I don’t want to be the object any longer, I would like to be the subject, and with that subjectivity I can name [him] as the object.”[8] That is, by making women the protagonists and men subordinate to the female gaze, the patriarchal view of the world in film can be disputed.

Indeed, Lady Bird’s protagonism gives prominence to her female gaze throughout the movie. In her relationships with two boys her senior year, the camera consistently frames the boys as subject to her gaze. In a classic love-at-first-glance scene, Lady Bird gazes upon a boy singing on a stage for the school audition. The camera lingers at his tall bright image centered on the otherwise dark background, “isolated, glamorous, on display.[9]” The camera then switches back to Lady Bird’s glowing face in the audience, confirming that the boy on display has become an person of her desire. Lady Bird establishes herself as the controlling figure in her relationship with the boy. In another scene later in the movie, Lady bird identifies another boy of interest. Lady Bird zones in on a boy playing guitar in a band at a party. The camera slowly zooms into the boy as he absorbs her attention. Audiences are asked to identify with Lady bird and share her admiration for the boy as she singles him out as a person of interest. Her female gaze at boys as objects is consistent throughout the film. Her protagonism allows her to transform the so-called male desire into female desire, allowing her to possess the power of the gaze.

Yet movies cannot simply uproot the male gaze by casting a female lead. Movies with female protagonists still feature the male gaze and portray women as sexualized objects: Easy A stars Emma Stone, who, in a notable scene, struts down a high school hallway wearing tight black lingerie; Mean Girls stars Lindsay Lohan, who gets involved with a clique of girls who wear high heels and short pink skirts to school; Legally Blonde stars Reese Witherspoon, who, front and center of the movie poster, dresses like a Barbie doll wearing a pink bodycon dress. Uncoincidentally, these classic female-protagonist films were all directed by males– males who tend to project their own vision of the world in which females are objects of their desires. In her essay, Mulvey emphasizes the male gaze in Hitchcock and Sternberg’s works; their voyeuristic interests compel them to identify the camera with the male protagonist’s view of women as stylized objects and visual perfections[10]. Yet, Mulvey does not consider how this patriarchal order of film could be uprooted by a director who is not voyeuristically driven. As a female writer and director, Gerwig, projected her non-patriarchal vision of the world onto the screen. Her vision defies the objectification of women and allows them to transcend their looks. With control over every step of the production process, she made sure that her natural female view was adopted into the film. This is not to say that all women assume the female gaze. Rather, women are less likely than men to have as strong a view of women as passive, raw, erotic material. In such, a female-directed movie makes a likely defiance against the male gaze.

Gerwig’s female vision of the world allows her to invest in the feeling of the female character, which is difficult for male directors to achieve as acutely. Beyond the shared looking, a shared feeling is crucial to allowing audiences to share the female perspective. In meeting with funders for her film, who were unsurprisingly mostly male, Gerwig found that men who did not have daughters or sisters could not understand the between Lady Bird and her mother. Men, particularly those who have not had strong female presences in their lives, often cannot accurately grasp the way women interact, let go the way they feel. Lady Bird achieves feeling by adopting an understated visual style in which the camera is mostly restrained and unmoving. The still shots highlight the dialogue and allow audiences to absorb the words and emotions of the characters over their looks. In the opening shot of the film, Lady Bird and her mother are sitting side by side on a bed with their backs to the camera. The frame is seized by the two characters who are themselves taking in the moment. The camera doesn’t move around to look at the mother and daughter, but instead lets their silhouettes sink into the frame. She shot states: I don’t want you to look at the characters, I want you to share their feelings in this moment. Lady Bird invites audiences to feel her rather than look at her. She steals the act of looking, and inverts it into an act of feeling.

Asking directors to halt their ways and focus on feeling is of course difficult in a visually-driven and male-dominated world. Lady Bird declares that a female-centric male-gaze-defying movie is possible. The Hollywood style of film has long taken on a patriarchal language, but these norms can be redefined. As Lady Bird demonstrates, movies can oppress the male gaze by featuring a female protagonist who does not play to voyeuristic male desires. She then is free to command the stage in which she articulates the look upon males and forwards the action. Since male directors have a greater tendency to project a patriarchal vision of the world onto the screen, the female gaze is best achieved by a director who has a desire for a non-patriarchal world, who oftentimes is female. This director can focus on the content and dialogue of women over their looks to evoke a shared feeling with the audience. Lady Bird is only a starting point for an anti-patriarchal cinema world, and it will take much time for greater shifts to happen in cinema. But Lady Bird proves that Mulvey’s version of the patriarchal world is neither permanent nor obligatory. The dominance of the “male gaze” is indeed a result of the male voyeuristic desires, but at large, it is a reflection of the gender disparity in the film industry which has obstructed females from telling their stories. The film industry has been and still is dominated by males who want to project their patriarchal world, but Greta Gerwig convinces us that there is potential for change. The men haven’t yet won.

This essay was read by Gyung Hyun Je. It is written in the style of Richard Brody.

Anderson, Hanah, and Matt Daniels. “The Largest Analysis of Film Dialogue by Gender, Ever.” The Pudding, n.d. https://pudding.cool/2017/03/film-dialogue/.

Friedman, Lyle, and Matt Daniels, and Ilia Blinderman.“Hollywood’s Gender Divide and Its Effect on Films.” The Pudding, n.d. https://pudding.cool/2017/03/bechdel/#methodology.