In April of 1967, Stokely Carmichael coined the phrase, “Black Power”  (Ture, 1992). Later in the same year, one of the deadliest riots in United States history broke out in Detroit between white police and Black civilians.  Many people, especially African Americans, had previously requested the establishment of a civilian police review board there, because the department was well known for its racism.  But the citizens were declined by the mayor’s office, as white residents had already accused the town of being soft on crime. 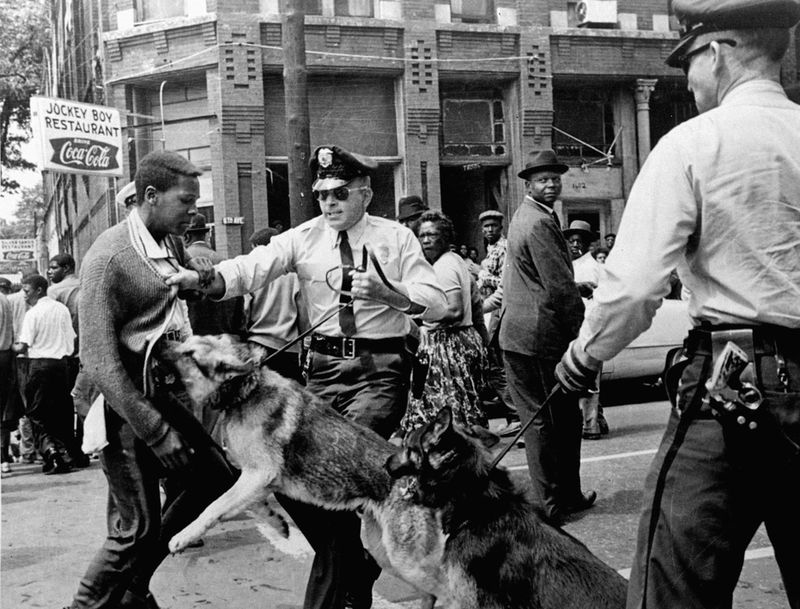 In response to the Black Freedom movement of the 1950s and 1960s, Hollywood, Marvel Comics, DC Comics, and other “mainstream media idioms made a self-conscious effort to address the dramatic racial shift in American society” and to allot Black actors more attention (Nama, 2009). There is an important film that opens in 1967 as its protagonist (a biracial half-human, half-vampire) is born from his human mother, who was just-bitten and near death.  The narrative of Blade, starring Wesley Snipes, toys with traditional American perceptions of race.  It is perhaps the case that the Civil Rights Movement is the reason why the film could exist in the first place.  The plot follows a hero as he kills villains, a Black hero as he kills white villains who possess mafia-like control over the police.  Even still, the two seemingly antithetical forces are interchangeable, and the death of the white monsters can perhaps be interpreted as the success story of their own white race.  If you only look bit closer, it’s evident that the whites who were murdered actually resemble the condition of Black lives in America.  The film propagates the racism that it appears to buck.  After all, a producer knows that her movie’s audience would like to continue to believe in what it already understands.

It is unconventional in Hollywood to cast a Black actor in a leading role, and it’s more or less outlandish to cast a Black actor who is not light-skinned in a leading role.  Wesley Snipes, as “Blade,” is one such rarity, and his performance in the 1990s would dent the 21st century’s #Oscarssowhite.  Snipes began his acting career under the direction of Spike Lee, an upbringing that imbues his professional identity on screen.  It is not possible to interpret Blade outside of the context of a racialized Hollywood.  In an essay on the relationship between vampires and race, Sarah Broderick writes that films carry the weight of the images of monsters they must portray, and she pays particular attention to cases where the monsters are actors of color.  Broderick notes, “the history of the bodies being placed within the film’s frame must be taken into consideration alongside the historical moment in which a monster arises, revisits, or is re-appropriated by a culture, in order to fully grasp the levels of meaning at stake in the images” (Broderick, 2011).  Blade’s unique image is contradictory and worthy of discourse in the context of American racial culture. 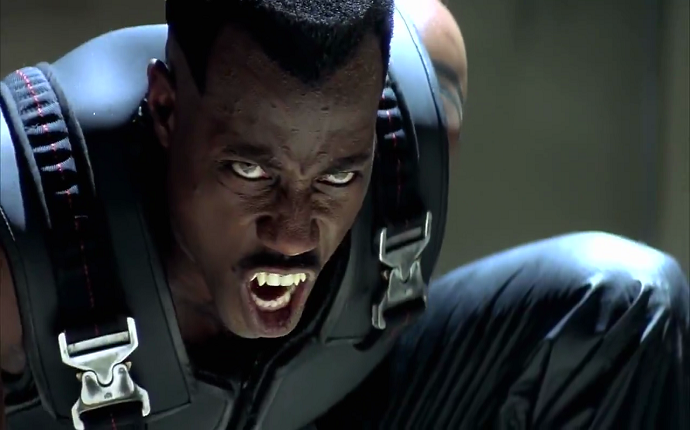 What’s peculiar, then, is how Blade’s character manages to be both culturally white-passing and a dark-skinned African American, and is able to infiltrate and destroy a white stronghold without making the audience think twice.  The movie pits white vampires, led by a devilish young monster whose name is “Frost” (about as white as you can get), against an African American, half-vampire, half-human named “Blade.”  If you compare their individual images on screen, whiteness is associated with evilness, and Blackness with goodness.  In order to infiltrate the white vampires, Blade utilizes his evil white vampire privileges — he can bear the sun, a “Daywalker,” he has inhuman strength, the ability to kill, etc.  Is this not related to how some part-Black, part-white people are occasionally ridiculed by the Black community for their ability to pass and reap the benefits of white people?

Despite Blade being ‘mixed-race,’ degraded because of his white impurity, he is still the hero of the story.  His goodness goes hand-in-hand with his Blackness.  However, in traditional (read: white supremacist) American culture, Blackness is grotesque, fleshy, wicked, uncivilized, violent, herd-like, and primordial.  It is associated with the body and sexual behavior (think of jazz and the blues).  Continental African practices, such as masquerading, scarifying, and assembling spiritual headdresses, were all debased by white colonists who discredited their sophistication and artistry.  Alternatively, whiteness is considered to be tame, self-critical, ethical, an abstraction of aristocracy, and translucent to the extent that whites are not faulted people but perfect vessels of a cerebral and spiritual ideal.  Elite white women in the 1800s went so far as to douse their skin in arsenic to appear more pasty and exude higher status.

Traditional whiteness does not characterize the white vampires.  They are violent, sexy, hickie-giving, animalistic monsters who throw blood festivals for their herd.  Their revelry is like 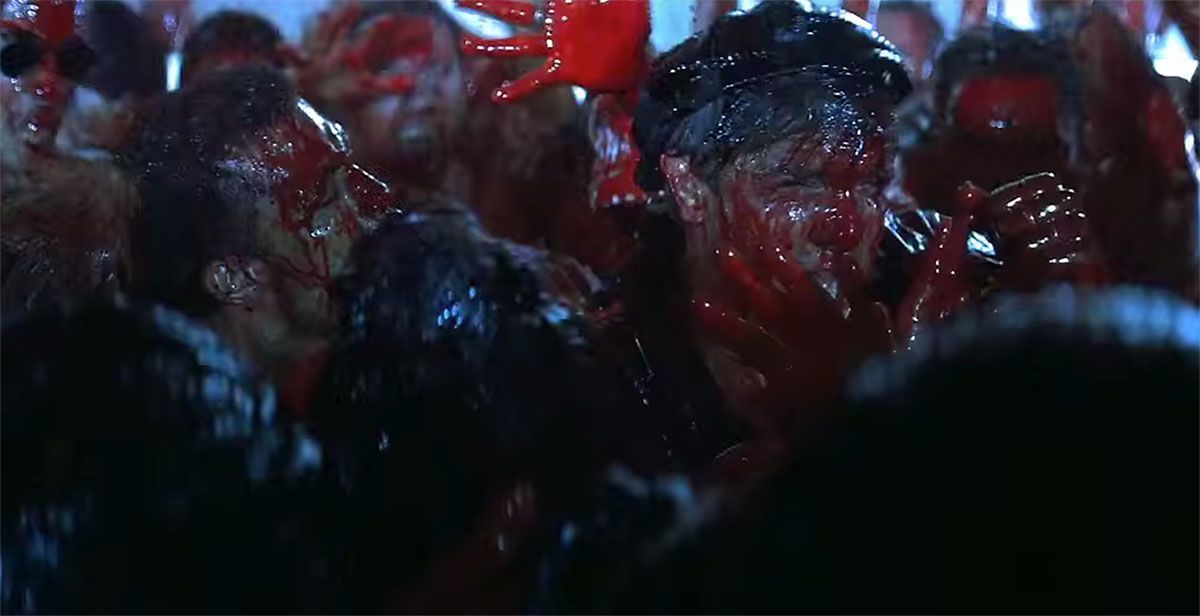 the ancient Romans’ Bacchanal, which stood out from everyday life in Rome because of its orgies, drunkenness, and garish indulgence.  Just as the Bacchanal features gluttonous consumption of red wine, the vampire rave in Blade climaxes as fire sprinklers spout blood from the ceiling.  The film manages to demonize white beings by ascribing to them the qualities that American racists and European colonists have used to reduce Black people.  The white vampires are identifiable as evil because they possess Black traits.  So if the white vampires resemble Black people, then where does that leave the African American protagonist who heroically fights for humanity and goodness?

On the surface, the film appears to have accomplished a socially progressive feat: to entice a (white) audience to cheer on a Black man as he kills white people.  Imagine the potential of this effect on changing the narrative of racism that currently perpetuates the murder of innocent Black people by police in Detroit, or in Atlanta, St. Louis, Cleveland, or Baltimore.   Among the police departments in the U.S.’s 60 largest cities, 41 of them have disproportionately shot and killed Black members of the community, relative to the city’s actual population of Black people (Mapping Police Violence, 2015).

But does Blade actually feature a flipped world where a Black man commits mass murder against white people?  In the film, Blade is white in most aspects of the cultural term. Despite the fact that he is not light-skinned and got his start by learning from Spike Lee, Snipes plays a character who was produced and edited into a white hero in Black skin.

The characteristics that encode an evil antagonist are so tightly tied to cultural predispositions to being Black (solidified in the historical reality of the world) that a white vampire with a ghostly hue cannot be anything but Black — violent, animalistic, sexualized, and ‘all jazzed up.’  Because the American and European codes for good and evil are founded on perceptions of white and Black people, a Black hero can’t be made.   The way to represent a hero on screen is so white, and the manner of portraying a villain is so Black.  The racially progressive film and the Black hero cannot exist.

This essay was read by Chloe.

This essay was written in the style of Mark Greif.