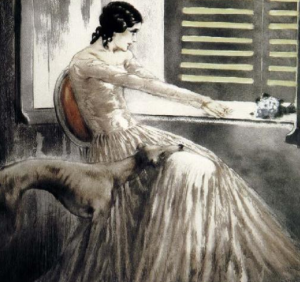 There is something to be learned from textbooks.  At the end of a chapter, if you were paying any attention, you will have read something discrete– pieces of information that you can synthesize and summarize into a single declarative: “I read about partial fraction decompositions” or “the life cycle of ferns” or “the Trail of Tears,” and this short and sweet encapsulation feels satisfying to possess.  You can prove you’ve read about something because it is finite in scope as an event or theorem.  But more than once I’ve been stumped by the question “what is it about?” when asked for my favorite book or recommendation to read on a plane, or when just talking about a novel in conversation. What is it about? I can tell you why I like it and think it’s worthwhile, who it’s by and her other works, the themes and the characters and the plot. But was that what it was about, or was it just the matrix in which whatever it was about took shape? Professors and teachers of English assign works of literature for the same purpose that teachers of other disciplines assign textbooks: there is something instructive, something to be gleaned.  So, surely, we must be able to say what we’ve read at the end of a story.  I’m going to illustrate the complexity of addressing this task for a particular piece of writing, “How to be An Other Woman” by Lorrie Moore to show how, unlike textbook writing, literary truths are shaky when the whole meaning of stories in literature can shift in a single phrase.

There are select occasions when assessing the truthfulness of a story is meaningful at all.  Only in the cases of biography or genres where we expect accounts accurate to reality, as in science textbooks or newspaper articles, and in these we are explicitly told as a feature of genre that the portrayals are true. The brunt of the content in these works is statements, which can be externally cross-referenced to verify or debunk.

Creative fiction cannot be assessed in this same sense. Prior to J.L. Austin’s work, the common belief among linguists was that statements could be defined as any utterance that could be proven true or false; Austin in How to Do Things with Words establishes a category of utterance which, although conventionally designated as statements, didn’t in fact have strict boolean values, which he termed “performative” speech acts (6).  Statements such as “I now pronounce you man and wife,” “I order you to stand,” and “I name the child Charles,” can either be “happy” or “unhappy” depending on the “felicity” of the conditions in which they’re uttered; conditions for “felicity” are unique to the utterance, but typically require a speaker imbued with requisite authority (a doctor has not the credentials to marry), and certain appropriate circumstances (one cannot really order someone already standing to stand, nor name a child Charles when the object to be named is a dog) (14).  Performative speech acts are by nature metalinguistic utterances which declare the actions they themselves currently perform.

“How to Be an Other Women” is a story which we can treat as something like a performative speech act. Told in the second person as a series of imperatives, the story is framed as a step-by-step guide on how to be a mistress, but not in generalities.

“What weather,” you hear him sigh, faintly British or uppercrust Delaware.

Glance up. Say: “It is fit for neither beast nor vegetable.”

It sounds dumb. It makes no sense.

But it is how you meet.

You the reader are conducted through the story as Charlene, a young woman, college graduate yet menial secretary, who falls in love with and has an affair with a married man. The instructions (authorial? divine?) which form the body of the story are at the same time dealt as they are enacted by “you” (3).  You are reading Madame Bovary on a bus; “Return to your book. Emma is opening her window, thinking of Rouen” (4). The simultaneous declaration of the action and its treatment as ‘having happened’ or ‘happening’ in the story constitutes performative acts; similarly, the “you” of the text represents both you the reader and you Charlene– meaning there can be no boolean value to the question “are you Charlene?” since it is simultaneously false and true. The story is an experience of your life lived in real-time.

If veracity were key, this story would have no merit because we know the “you” of the text cannot possibly be referencing us, since in our real lives we’re reading the story.  The relationship to the reader is a peculiar one in which the very act of reading enacts a series of imperatives that unfolds the story before you; to read the story makes it true.

In the cases of science or history papers, logical argument and fact are surface-level information. This type of knowledge is what is readily available–the happenstance of an event, the formula of a chemical compound.  While not necessarily easily intelligible, meaning here isn’t veiled from view.  But stories have no obligation to tell you what the truth is explicitly nor implicitly.  Even in the most overt example of parable, where the intention is to clearly illustrate a moral, the meaning of something as digestible as Aesop’s “The Tortoise and The Hare” has been lost. Originally, Hare’s hubris is what lead to his defeat, napping after seeing Slow and Steady (the tortoise) so far behind.  But over the years, the line “Slow and Steady wins the race” has assumed the role of moral, converting “Slow and Steady” from a proper noun to an ascription of virtues.

Because knowledge is coded, each piece throughout a story is not necessarily recognizable by the same reader; Charlene quips that “the unexamined fly is not worth zipping,” a pun which can only be understood if the reader is familiar with Socrates’ “the unexamined life is not worth living” (10). And such knowledge or truths can range from something as frivolous as a pun to the entire meaning of the story.

Our story is replete with references to the insecurity of an “other woman’s” identity.  You “philosophize,” declaring, “you are a mistress… part of a great historical tradition” that normalizes your degradation and even esteems it (16). You “wonder who you are,” “gaz[ing] into the mirror at a face that looks too puffy to be yours,” “then look quickly away, like a woman, some other woman, who is losing her mind” (8, 12).  In defining yourself an “other woman,” your identity is shaped completely by what you aren’t: his wife–the woman.

So when in the penultimate page you discover that all along the woman he convinced you is his wife is actually a mistress herself, it becomes evident that there is no way to know the truth in this story; “Patricia is not his wife. He is separated from his wife; her name is Carrie… Patricia is the woman he lives with” (21).  Whatever sense of identity you felt by having a set category as “other” is now meaningless. Already you were living the lie of a mistress, wherein your very existence is a subject to be hidden and denied.  You are an other woman in an ignominious line of other women.

At the same time, you are confounded by the identity of the man you love.  What little you did know of him, what little he shared of his “dust, eat, bicker” relationship with his so-called wife were lies. He is suddenly remote and foreign, asserting in his defense that what he has “always admired about you is your strength, your independence,” so trite and meaningless a line, a canned phrase that reeks of use and reuse (21). Yet in some ways you are “other” as in exceptional; you know of Patricia while she seems to have no knowledge about you; months later he still “calls you occasionally at the office to ask how you are” (18, 22).  You still answer his calls.  Your relationship and your identity remain ambiguous.

Logician Charles Pierce argued that “pictures alone can never convey the slightest information… it leaves the spectator uncertain whether it is a copy of something actually existing or a mere play of fancy” (7).  We must treat literature like a picture. Because it has no necessary binding to some real world analog, seeing any one word appear in the text means nothing by itself. Each subsequent sentence can complicate or negate something previous. We think we’ve found out how to be an other woman, that “it essentially means to put your shoes on the wrong feet,” that “it is like constantly having a book out from the library” (5). To be a mistress is to be something as awkward and unnatural as misfitted shoes, as out of place as an overdue library book–an error to be righted as soon as he comes to his senses. Being an other woman involves constant paranoia, obsession, and ultimately settlement for whatever scraps you can scrounge; “On the street, all over, you think you see her… Every woman is her. [But] remember what Mrs. Kloosterman told the class in second grade: Just be glad you have legs” (12, 13). But our truths crumble when confronted with an incompatible reality, when our understanding of “other” is revealed to have been erroneous all along, and the tenuous means of coping on which we had come to rely is rendered useless.

The conclusion is a form of twist-ending tantamount to the adventure in “A Wizard of Oz” all being a vivid dream. An abrupt and story-altering end revelation is a common trope in film and literature, including “Shutter Island,” in which events are revealed to have been a ploy to remedy the insane protagonist, or Yann Martel’s Beatrice and Virgil which in the final pages emerges as an allegory for the Holocaust.

So we find that literary truths can be unstable.  While its title has us believe we’ll emerge from the other side having learned, the story sets up our beliefs in order to knock them down. “How to Be an Other Woman” embodies literary instability by turning the truth on its head, leaving us to answer our original query: what was it about? with the reality of finding more questions than answers.