We went to see Kei-san this morning. We met him the first day of our trip and it was nice to see him again near the end of this trip. We started with zazen, answering the koan, and then zazen again. The koan we were given was described in by blog post from January 12th. While answering the koan—what would you bring if you were asked to bring your kokoro—and we went around the room, each of us answering our thoughts and answers for that question. Kei-san proceeded to give us analogies for how the idea of the kokoro can be thought about. A central idea in many of those analogies was that the Buddha in all of us and recognizing that is part of the journey of finding your kokoro. It was nice to think about that idea and go through another zazen session.

We later split our separate ways and many of us went to see Tofufu-ji, eat Tsukemen, and then go up Fushimi Inari. Cj, Si Hou, and I had gone to Fushimi Inari after we had visited Kei-san the first day, but it was dark then and felt different. We were able to go with daylight today, get all the way to the top, and visit a few shrines along the path. It also felt like we had come a full circle by doing so many of the same acitivities in the beginning and end of the trip. 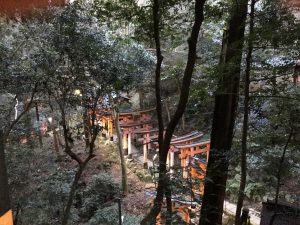 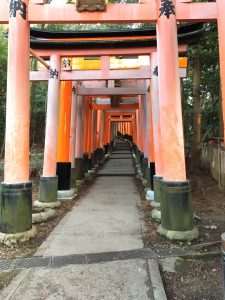 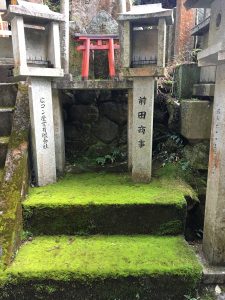 We were able to wander around Fushimi Inari, get lost, find new paths, and ultimately getting to the top. The sun was up at the center of the sky when we started, and set when we ended. Si Hou, Franky, and I went to eat sushi afterwards and then headed to the hostel. I’m feeling the nearing end of this trip, and I’m not sad or disappointed, but I feel as though I need to make the most of our last day tomorrow!