We set out to Teramachi at 9:25 AM today to watch Amae Dairiku, a tea master, gather water from a shrine. I was surprised by his excellent English pronunciation and by his Hawaiian pidgin accent as well. I did not expect to hear this accent in Kyoto, and it gave me a sense of familiarity. He had lived in Hawaii for a long period of time during his childhood, so he picked up the accent. Dairiku-san explained that fresh things are favored in Shintoism, so he gathers fresh water from a well covered with fresh bamboo. He also serves fresh sweets and presents freshly picked flowers to his guests. It was interesting  After gathering and buying the materials needed for the tea ceremony, we headed up to his residence. He rents a traditional Japanese home with a few other people from Daitoku-ji. I was really able to understand the effort that he puts into gathering materials, as the jug of water was over 20 kilograms in weight; the whole process took over two hours. Dairiku-san said the process is very enjoyable, as he is able to experience gathering materials on his own and also experience the world during the process.

After settling down in his residence, he taught us the basics of tea ceremony. When I entered his tea room, the first thing I noticed was the incense. It really reminded me of my paternal grandmother’s home, as she constantly lit incense. The Chinese characters for tea ceremony does not include the word tea in it. Instead, the characters are temae (点前), which are the characters for “point” and “in front of.” They mean that tea ceremony is a form of active meditation: to focus on what is right in front of you. It is to momentarily focus on just what you are doing, such as sipping or brewing tea, and forget about the daily struggles of life. Although it is called a tea ceremony, the focus is not on the tea, but rather on the process itself. We had a lunch break before the tea ceremony. We ate at a restaurant called Sarasa Nishijin. It was very unique, because it was a bath house that was converted to a restaurant. The menu was very restrictive, as a we were only able to choose from three sets. I ordered a nanban chicken set, which was basically fried chicken with tartar sauce. I find it a bit weird that the direct translation of nanban is southern savage, which refers to Westerners.

We were split into two groups for the tea ceremony. One participated in the ceremony while the other visited Daitoku-ji. My group visited Daitoku-ji first, and we decided to visit Zuihou-in, because Koutou-in was not open. The main attraction of Zuihou-in was its zen garden. According to the translation of its description by Kagaya-sensei, the main body of rocks represent the land of deities. Rough waves are raked around the rocks with calm water raked along the perimeter. I thought the arrangement of the rocks looked like the head of a dragon. The rain also gave a special effect to the garden, as the color of the rocks change drastically with it.

We were instructed to focus on small details during the tea ceremony. We had to focus on the boiling steam and flower as we walked into the room. During the ceremony, I noticed that his movements were very precise and stylized. He cleaned each bowl with hot water before mixing tea in it. Although he said he does not focus on the flavor of the tea, it was still very delicious. I really like the subtle saltiness coupled with bitterness. We were also served a warm dessert made specifically for tea ceremony. It’s nice that specialty stores that sell only tea ceremonial desserts are still able to exist in Kyoto, as they have ceased to exist in many other parts of Japan. The dim lighting of the room really made me feel at piece, especially when I am constantly exposed to the bright lights of modern society. I think I may try dim lighting in the future to relax as well. 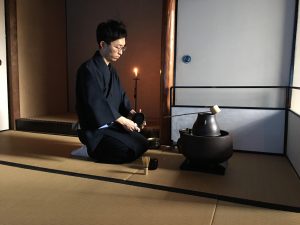 Franky and I headed to the Pokemon center after the tea ceremony, and it was great seeing all of that Pokemon merchandise. I saw that Pokemon gold and silver were being sold, which made me think of my childhood, as I played those games for many hours. I was shocked at the school bags sold on the same floor as the Pokemon center. There were some that were over 1,000 USD, which is ridiculous for a school bag. After that, we met up with Tiffany and Joanne for dinner. I found it ironic that we ate at Marukame udon, a chain udon restaurant, as I live a five minute walk away from a Marukame udon. The difference was that they also include freshly grated ginger paste as a condiment in the Japan locations, which I really enjoy. I put a monstrous amount of ginger paste in my udon, which turned the broth into ginger soup. My group will interview our final two artisans tomorrow, so we will finalize the questions after I finish this blog post.