We met up today at 9:45 AM to head out to the Kanze Noh theater. We wanted first row seats that were in a good position, but ended up with second row seats instead. I was still able to see the performance very well though. The Noh performance was a sequence of the plays Okina, Yumiyawata, Niwatorimuko, Toboku, and Iwafune. There were also dances after each intermission.

I was responsible for researching Noh masks, and it was exciting to see the Noh masks in real life. I noticed that the Noh mask looked different as the actor moved around the stage due to changes in lighting, and it was interesting to see how the mask can be perceived to look different with lighting. Noh finds many ways to express emotion without using facial expressions, such as changes in lighting, music, and bodily movements. The music instruments used in Noh are the flute, hip drum, shoulder drum, and stick drum. The music’s tempo quickened and volume increased during dramatic scenes. A high pitched flute sound often preceded the beginning of a scene as well. I liked the hip drum the most because of its distinct sharp sound. I enjoyed the Okina and Iwafune plays the most, because they were fast paced and lively. I regret missing Niwatorimuko. I thought the intermission was after Yumiyawata and left to eat lunch. The play began as I started eating and ended soon after.

After the Noh performance, Breelyn, Joanne, Franky, Tiffany, and I split up from the rest of the group to check out the Kyoto Museum of Modern Art. However, it was closed, so we decided to go to the Kyoto station area. We shopped around for a bit and ate at a restaurant where the food was served in a bamboo container. I had an unagi set, as I’ve been craving it since I saw unagi in Nishiki market. I also tried my luck at a gashapon machine, and I actually got the item that I wanted! 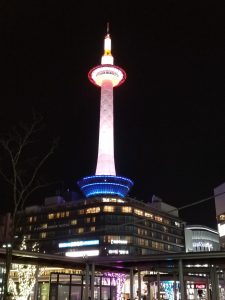