Noh lecture with the Takabayashi family

We left the hostel at 9:15am this morning to the home of the Takabayashi family. We took a taxi and were able to get to the home with plenty of time to spare. We entered the home right on time, met a father and son of the family, and received a brief introduction.

The Takabayashi Family has maintained the Kita School of Noh and they soon started by performing two dances for us. The second dance they performed, Iwafune, was really cool to see because we had seen it yesterday, but the Takabayashi family is part of the Kita school and it was interesting to see their take on the same dance. 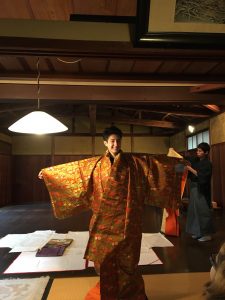 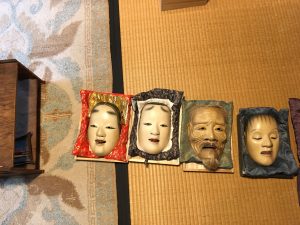 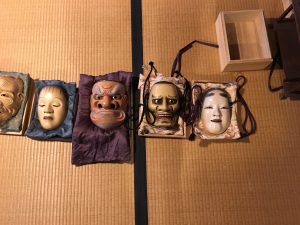 We were able to see plenty of their masks and even try two of them on! Seeing what a Noh actor was incredibly helpful for understanding what the perspective of the Noh actor. I was surprised to find out really how limited the vision of the Noh actors are once they put on the mask. Furthermore, the masks are often placed higher on the face so the performers are unable to see through the eyeholes of the mask. They usually resort to seeing down through the noseholes of the mask, being hyperaware of how the floorboards feel in particular places of the stage, and using instinct. We were able to see some of the Noh costumes that are worn during performances and a few of us even tried some on! We then saw some of the fans that are used during Noh performances, learned about the hair (which is usually made out of horse tails) that is used to depict women in Noh, and then were able to ask questions to the Takabayashi family.

Throughout the course of this trip, I’ve been finding relations between our three main topics—Zen, Noh, and the tea ceremony. Zen seems to contain fundamental values that transfer over to so many other things in Japan (including Noh and the tea ceremony). However when asked about how Zen relates to Noh, the older member of the Takabayashi family that was with us mentioned that while there may not be any direct relations between Noh and Zen, they both require giving all of the self to a purpose. This can be seen during both the training and performance of Noh, where, like in practicing Zen, dedicating the full self is absolutely necessary. One other thing that he mentioned earlier was that during Noh performance, the performers have little to no relation with the audience. They perform the same way regardless of the size or members of the audience. Sometimes they perform for the Gods in which case there may not even be an “audience.” This made me think about last week when we met Yukei Isobe, the Zen master. He had mentioned that Zen is not something you simply practice while meditating, but it’s something that you carry into all parts of your life. I was thinking similarly of how sometimes it’s common for me to act differently around different people if I really do have a true self. I believe living a life without conflicts and contradictions, and always having one true self, would be fulfilling and maybe living the same way that a Noh actor performs, consistently the same way regardless of the audience, may lead to a more fulfilling life. 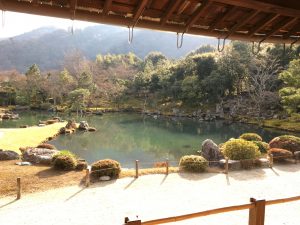 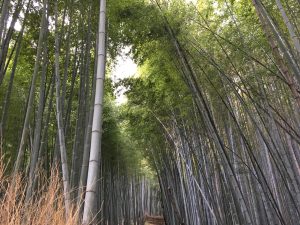 After meeting the Takabayashi family, our group split up. A few went to relax at the hot springs. Others of us went to Arashiyama. After grabbing lunch, we saw Tenryuji and it was absolutely beautiful. The pond by the garden, like most other large ponds I’ve seen in Kyoto, was breathtaking. It’s very easy to simply sit and be at ease by it. We visited the Bamboo Forest right afterwards and it was awe-inducing to be surrounded by such tall bamboo everywhere you looked. Soon afterwards we split up and my group came back to Sanjo where we ate a nice ramen dinner before heading back to the hostel. Today was a packed day filled with many adventures and I’m looking forward to an even more packed day tomorrow!