We attended a lecture on Noh today with Monica Bethe today. It was nice meeting her in person after reading so much of what she has written. We went through a brief history of Noh, the five categories of Noh plays, their modes, and their structure. It was great becoming more informed about the Noh play because we are going to be spending so much of tomorrow watching Noh, and I’ll be sure to look out for things such as the progression of the dance, structure of the yumiyawata that we learned, and characteristics of the respective categories of plays tomorrow.

After the lecture, we had quite a bit of time to ourselves and were able to explore Kyoto on our own. CJ, Si Hou, and I decided to grab lunch at the market and then set out for Kinkakuji and Ryoanji. Figuring out the appropriate bus itineraries was confusing initially, but I think I have a much better understanding of public transportation in Japan now. We also defaulted to keeping Si Hou as the public transportation lead of the group as he understood/read Japanese best. But then we got to the Kinkakuji and it was amazing! I’ve got to be honest–I was initially not too keen on going to Kinkakuji because I thought of it as just a symbol of wealth and extravagance. I was afraid that it was just going to be a gaudy display surrounded by crowds of loud tourists. While there definitely were a lot of tourists there, I was amazed by how calm and at ease I felt while I was there. The large pond by the temple was amazingly designed and simply standing and observing the soft ripples in the water, carefully placed islands and trees, and clean golden temple made me feel at ease. It was easy to stand and just be at Kinkakuji without feeling rushed or as if you had to be anywhere or do anything. Seeing Kinkakuji also made me more interested in Zen gardens and design, and I would definitely want to explore more of them during my time here at Kyoto (and learn about Zen design afterwards too!). 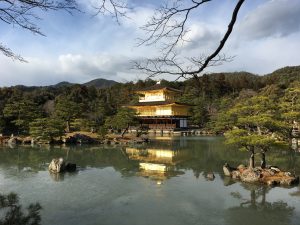 After Kinkakuji, we walked about a mile to the Ryoanji temple. I was excited to see the rock garden that I first learned about my freshman year in ARTH 103. It didn’t seem too crowded while we were there and we were able to sit front and center by the rock garden, dangle our legs, and just be. This was another area where it was easy to feel at ease and a sense of internal quietness despite the tourists around us. The exact meaning of the rock garden is unclear and it was fun speculating what they could mean and creating narratives around what the rocks, moss, pebbles, and space represent, but it was also nice to not have to worry about having the space fit any story and simply letting them be what they are. Ryoanji also made me think about Zen design, how space and absence of space can be equally important, and how things can be boiled down to an essence/fundamental. Going to Kinkakuji and Ryoanji after meeting Zen master Kei-san yesterday was great and are proving to shape a great deal of my mindset during my time here at Kyoto. I’m curious to see how I feel about this going forward as we get ready to see Noh plays tomorrow.