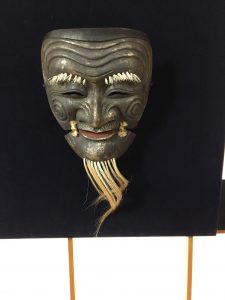 A Noh mask we saw today

Kokun-sensei is currently 65 years old. When he was younger, he became friends with a Buddhist sculptor who introduced him to the Buddhist sculptor world. Kokun-sensei became interested in pursuing the craft, but was advised that before working on the sculptures, it might be best to work with half 3-dimensional objects, such as masks. Thus, young Kokun-sensei went on to learn Noh mask making. He went to a Noh mask teacher with a knapsack, asking for admittance. Kokun-sensei even brought a knapsack because if he wasn’t to be admitted, he was planning on sleeping on the teacher’s doorway until he’d be let in. Luckily the teacher admitted him, he learned Noh mask making, and stayed with it instead of going back to Buddhist sculpture making as he had initially intended because he always saw that he had more Noh mask making-learning to do. He also is attracted to other qualities of Noh masks when compared with Buddhist sculptures: Noh masks exhibit a wider range of expressions and the movements of the actors during the performance need to be taken into account. In fact, Kokun-sensei even trained in Noh performance to better understand the craft, and the acting/singing affected his understanding of Noh and allowed him to incorporate more complexities of the Noh characters into the masks. This incredibly understanding of the world of Noh that Kokun-sensei is clearly evident in the masks he has made, which we were able to examine afterwards. 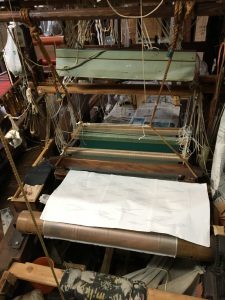 Later in the afternoon, we went to see Sasaki-san in Nishijin-district, which is famous for its textile production. We saw weavers creating kimonos and Noh costumes, and learned about its process. The weavers at this textile mill are typically given parameters (often by Sasaki-san) on what they have to produces (parameters include colors and where they go). The rest of the process is up to the creativity of the weaver. Monica Bethe explained how the machines worked and we were told that while this mill uses punch cards to direct the design the machines create out of silk, many other textile mills have moved to using computers since they are cheaper in the long run.

It was great to see these craftsmen today. I was in awe of how much both Kokun-sensei and Sasaki-san have dedicated to their craft. Over the past few years, I’ve been placing an increased value on mastery and exercising creativity (especially if the creation is made with ones hands). While I haven’t personally dedicated myself to any particular activity which is in line with these values, I do think it can help with accessing a state of flow on command. This past week in Kyoto has made me think a lot about the value I place on any activity’s process versus its result, and although I’ve long privileged the result, seeing craftsmen, Tea masters, and Zen masters this past week have made me more strongly consider that maybe focusing on the process in any creation or activity is one way to increase mindfulness and be able to access the state of flow on command.