Learning about Noh from Takabayashi Family

We boarded a taxi at 9:15 AM to the Takabayashi Family’s residence. They live in a normal Japanese home, so I was surprised that there was a Noh practice stage in it. We were greeted by the father and son of the family and led to the Noh practice room. The marks on the stage caused from countless hours of practice showed how much hard work is needed to become a Noh actor.

The son performed a small segment Hagoromo and the father performed a small segment of Iwafune. Seeing a Noh performance less than 10 feet away from me was completely different from the second floor of the Noh theater. I was able to hear the Noh actor clearly, so I was able to hear what he was saying and the changes in the tone of his voice as he sang. I was not able to hear these details from the second floor of the theater. They did not have costumes on, which made me realize how precise their movements need to be. The movements become even more difficult with the heavy Noh costume on. I was really excited that they allowed us to try on a Noh mask. Wearing a Noh mask was more comfortable than I thought it would be. I tried on a Kurohige mask, which has larger eye slits. Despite that, my vision was heavily impaired. Noh actors put their mask in an awkward position so that it looks more balanced on the face. This hinders vision even further, as the actor’s eyes would be between the eye slits and the nose slits. As a result, the actor is only able to see the floor and the ceiling. Thinking about that is scary, as the Noh stage is typically elevated. Learning about these intricacies of Noh made me appreciate Noh even more. Seeing the Noh masks up close was fascinating. From afar, I was unable to see the small details of Noh masks. Up close, I was able to see how the mask for a young boy was very smooth, while the mask for an old man was rough. In addition, the size and shape of the eye slits varied depending on the type of mask. The masks for lively roles such as a god had large circular slits, while the mask for a blind young boy had narrow slits. We were also shown Noh costumes and fans. I really liked design of a fan that showed the changing seasons. 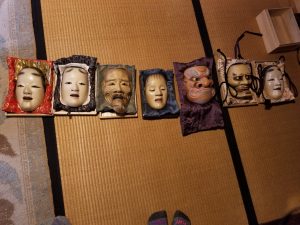 We headed out to Arashiyama after the visit to the Takabayashi family. I was shocked that we did not need to pay when boarding the train. Instead we pay when we leave. We decided to eat before sightseeing, as it was 1:15 PM already. We ate at a soba restaurant, and it was nice because I’ve wanted cold soba since arriving to Kyoto, and I accidentally ordered hot soba instead a few days ago. We visited Tenryu-ji after the meal. The garden was the most beautiful that I’ve seen so far in Kyoto. I loved how the surrounding mountains were incorporated into the garden. The reflection of the garden on the pond was also stunning. We visited the bamboo forest, and the natural blend of different hues of green was beautiful. 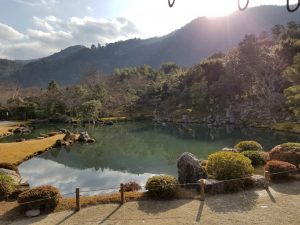