The last activity for our trip was visiting Taiko-an to do zazen and answer the kouan. Isobe-sensei originally wanted to us to answer the kouan first and then do zazen. However, he changed his mind, as doing zazen may help with answering the question. The kouan was, “If you were asked to show someone your kokoro, (rough translation: mind or consciousness) what would you bring to the person?” I had not thought of an answer then, but I have an answer to it now. The only thing I can do is bring myself to the person. Just like how our world is different at every point of time, my kokoro is also different at every point of time. Isobe-san also talked about many topics related to zen buddhism. I liked his explanation of concentration. Concentrating on something means to think about it so much that you forget about yourself.

We explored the rest of Tofuku-ji after the session with Isobe-sensei. I was able to see the dragon on on the ceiling of a temple that Ludvik-sensei told us about. It was as impressive as she had described it. The dim lighting of the temple enhanced its mysteriousness. The sanmon was my favorite structure of the temple. The engineering involved in making such a large gate without screws is very impressive. 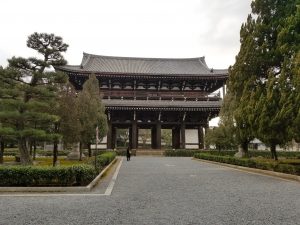 We went to a tsukemen restaurant after visiting Tofuku-ji. I had tried tsukemen back in Hawaii, but it was tad disappointing. This place was a bit different from other ramen places, as it used a chicken base. It tasted pretty good this time, and the citron added left a nice touch of sourness and saltiness.

We went to Fushimi-Inari, as my last trip to it at night was unfruitful. We went up the wrong way (no gates) at first towards Mt. Inari. After 20 minutes or so, we realized that something was off and headed back. The gates honestly looked much better in pictures than in person. However, the sight up the mountain was really nice. 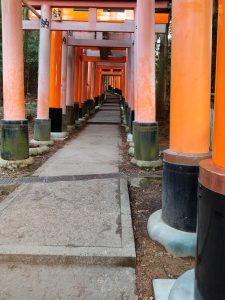 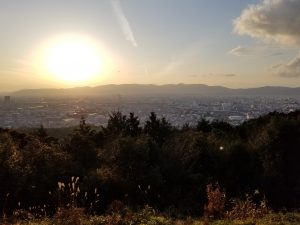 We ate kaiten-sushi for the third time, and it was satisfying as usual. Tomorrow’s my last day in Kyoto, and I still haven’t decided on where to go. I’m definitely checking out