This morning we went to have a workshop with the Takabayashi family at their home. The workshop was led by a father-son pair, who started out by demonstrating a couple of shimai (simplified dances). One of the dances was from Iwafune, one of the plays we saw yesterday. The plays we saw yesterday were by the Kanze school, though, and evidently there are some differences between schools, though I am not discerning enough to see them. After demonstrating the dances, the Takabayashi men gave an explanation of and showed us the masks, robes, fans, and wigs that they wear in performance, explaining the nuances of each. I got to try on a robe, which was really pretty hefty, and then we all tried our hands (faces?) at wearing Noh masks. Our vision was pretty limited with the masks on (though Tiffany pointed out that in some cases you could see the ground through the nostrils of the mask) but while we were wearing them with the eyeholes lined up with our eyes, real Noh actors have the eyeholes above their eyes, so they really can’t see very much (especially if the character has a small nose!). Learning this added a new dimension to my understanding of Noh performance – the actors are truly masters of bodily and spatial awareness.

Relatedly, during the Q and A, Tiffany and Joanne posed a question about the relationship between Noh performance and Zen. While the elder Takabayashi, who answered the question, claimed that he didn’t know much about Zen, his answer betrayed the inevitability of parallels between Zen and Noh. He explained that because a performer’s personality always comes out during their performance, it is crucial that to some extent that personality is Noh-like, which entails living your day-to-day life in a way that is consistent with a Noh sensibility. He then explained that one of the most important aspects of this Noh-like existence is focus in every moment.

The comment was strikingly similar to an idea that the Zen priest Kei-san reiterated multiple times during our talk with him: that Zen as a concept is not confined to the temple or to Zazen, but should instead pervade everyday life. I am not sure if Zen could be defined as focus, but there is some similarity in the thrust of the Noh and Zen lifestyles. Additionally, in terms of thinking about traditional artisans (or religious leaders) in the present, it is interesting to consider the dimension of physical geography and scope of ideology. How much to things like Zen and Noh extend out of the temple or the theatre, their designated physical spaces? And what does this say about the relationship of most Japanese people to Zen and Noh? Zen, of course, has a more democratic attitude toward participation while the Noh lifestyle is limited to a hereditary set of performers, but I believe that the similarity in Takabayashi-sensei and Kei-san’s commentaries is still pertinent.

After the Noh workshop, Tiffany and I went to Toji-in and Ryoan-ji, then went to an onsen in Arashiyama before heading to Osaka, where we walked around and had some okonomiyaki. As the finale, I dropped my phone in the toilet at Yodoyabashi station! It was overall a great (and packed) day!

P.S. My phone is still alive as this blog post is being written, and I had a hilarious conversation with the hostel front desk staff who had never heard of putting a wet phone in rice before. I’ll post updates. 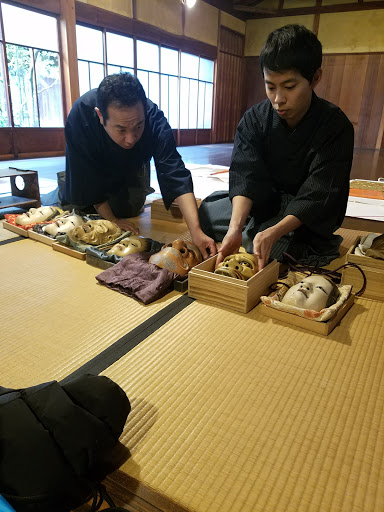 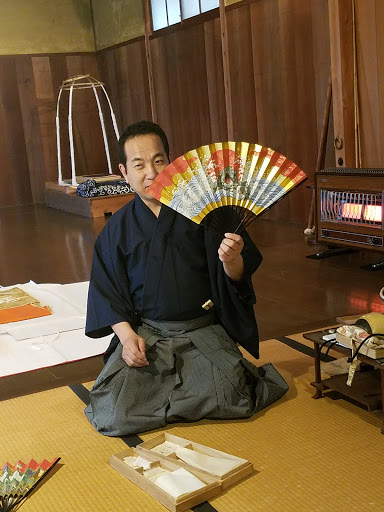 The elder Takabayashi displaying a sunset over waves fan 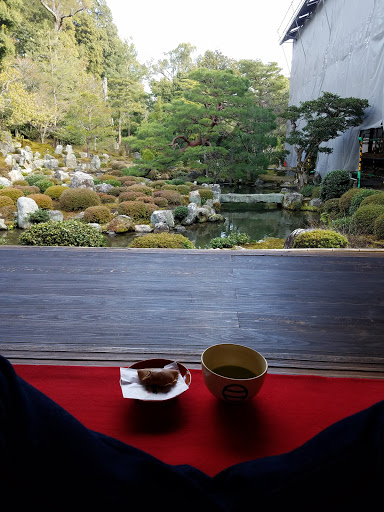 Having matcha and okashi at Toji-in 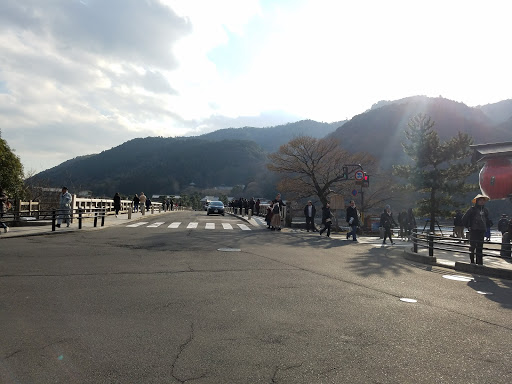 Arashiyama is kind of pretty, I guess