Today was quite the eventful day in Kyoto, a city that I grow fonder of with every step taken. Jet lag had me awake at 5 AM and out the door by 6, after which Leah, Franky, Joanne, and I walked around an empty city with nothing but freezing hands and a shared desire to explore. We visited one temple, Rokkakudo, a hexagonal temple most famous for being the birthplace of ikebana (the art of flower arrangement). The structure is a strike contrast from the drab concrete buildings surrounding it, creating a tension between the old and new. I saw this all over the area near Sanjo-dori, the neighborhood in which our hostel is located, and am compelled to look more into how urban planning accounts for and presents historical structures. 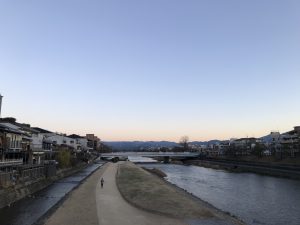 The view of the river from our frigid but beautiful morning walk. 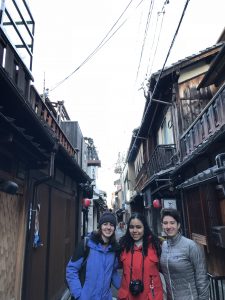 After walking around Teramachi and the Gion district, we proceeded to a sub temple of Tofuku-ji for our first event: a meeting with Isobe Yukei, a Zen priest, complete with tea and meditation. As a Southern California native, I had seldom seen any variant of Buddhism and meditation practiced outside of a recreational and “trendy” context, informing my interest in partaking within its practices  within  a more traditional context. We also met with Sachi-san again and Mitsue-san, our interpreter for the trip, both of whom seem quite lovely. 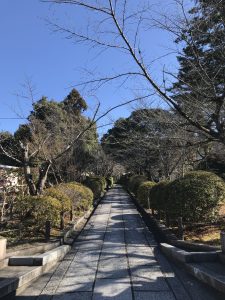 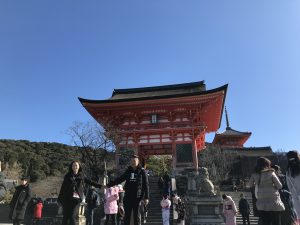 The entrance to Kiyomizu-dera.

The day at the temple began with the provision a koan (riddle)—what would you do if Drama asked you to bring your “kokoro” to him?—that is not necessarily meant to be answered in a conventional and purely logical sense. Following this was one round of sazen, or guided meditation. A bell marked both its beginning and end. I certainly felt more self-aware of my physical body and perceived mind, but after nearly twelve hours of constant walking, I did not want to, for all I felt was physical pain. My joints ached, my shoulder throbbed, and my legs fell asleep, sensations that I would not have felt so acutely had I not been in this meditative state. However, the clarity of mind overshadowed any discomfort — it is only in hindsight that I realized how meditation has the power to verge on the transcendent.

After this period, a five-minute break, another round of sazen, and a question-and-answer portion over tea followed. I am still thinking of how to answer his riddle. I tried thinking of something that is clever and all-encompassing, but what came to mind and still remains is a “Late Fragment,” a poem by Raymond Carver:

And did you get what

you wanted from this life, even so?

And what did you want?

To call myself belovedto feel myself

beloved on the earth.

– Raymond Carver, A New Path to the Waterfall

For me, it conveys my existential “kokoro,” the heart of things, so beautifully as a distillation of my aims in life. To love and to be loved is the same as to have lived and died with purpose. I will be in state of Zen following this visit for many days to come, and I eagerly look forward to our second visit on the last day. 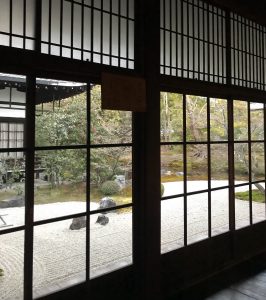 A beautiful view of the Zen garden after finishing zazen.

Afterwards, Si Hou, Sohum, and I went to Fushimi-Inari, which is famous for its meandering path of orange shrines that number in the thousands. It was a sight to behold, though I would have preferred making the trek in the early morning instead of in the early night. The harsh artificial lighting distracted from the overall experience. On our way back, I decided to look at some shops two blocks away from our hostel, and after loitering in several stores, I found myself lost in a city whose language I did not speak and whose streets are largely unfamiliar. What a scary but liberating experience, to be stripped of one’s communicative faculty, to attempt communication with another, and to anxiously await what results. People were quite kind to me, despite the language barrier. I also was able to look in more shops than I had anticipated, and was consequently more tempted to buy clothing that I did not need. Eventually, I found my way back, and with renewed confidence, proceeded to Ichiran for a much-needed bowl of ramen by myself. 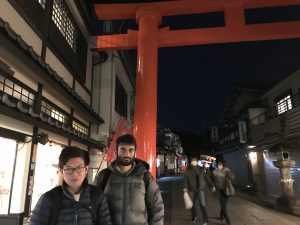 At the time of writing, I am in bed beyond exhausted. This is one of the many ways I know it was a day well-spent.