The day of the 22nd started without trouble. All of us, piled into the Piece Hostel lobby at 10:15am, keycards collected without issue, with a shuttle waiting to take us to the airport: everything was just as planned. One minor sentence: Narita airport is supposed to have around 2 inches of snow, and they don’t usually get snow. Surely it would all be okay! We flew magnificently from Osaka to Narita, where I had what I thought would be my last meal. 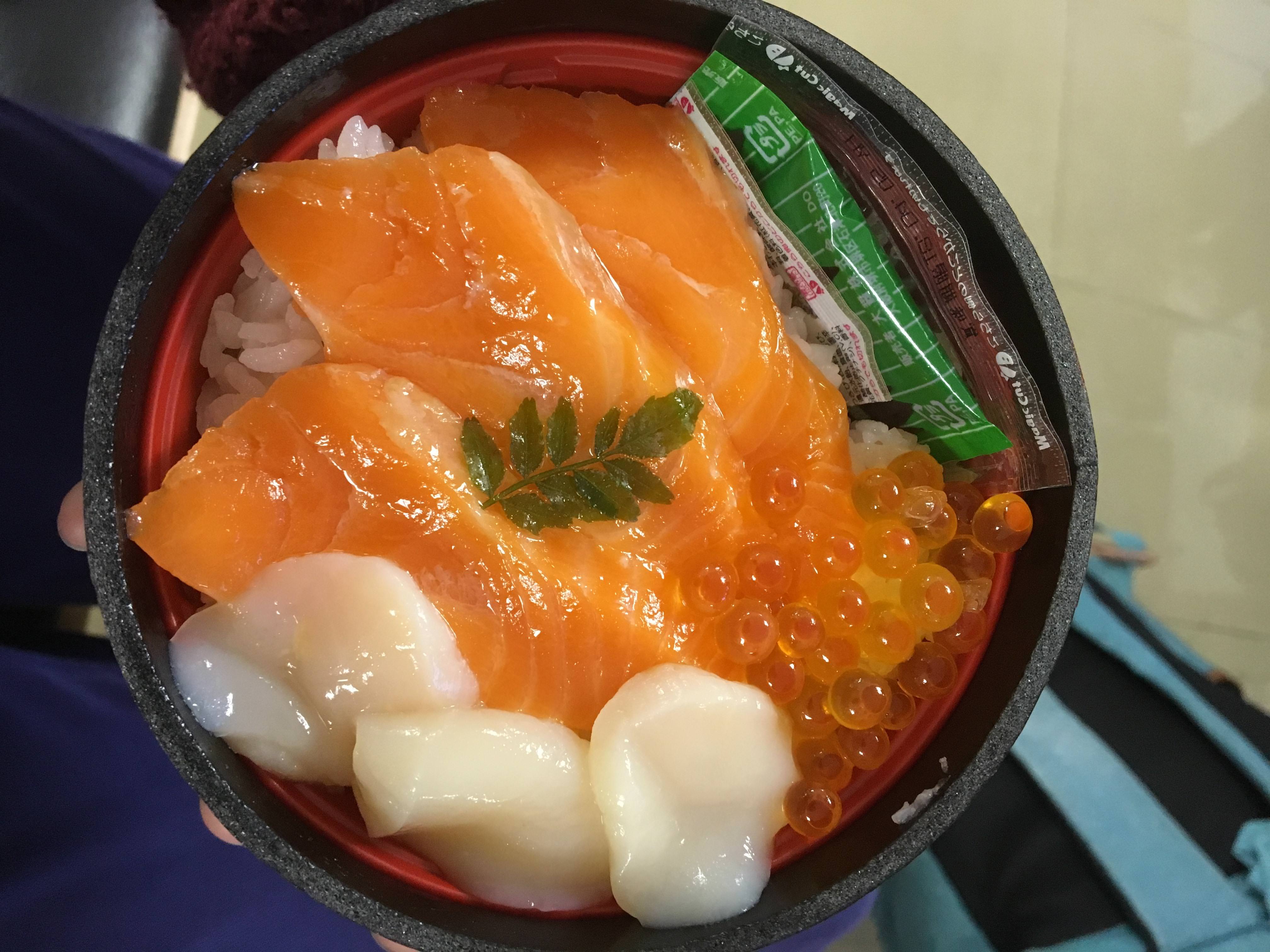 Then came the trouble. (Here are our trouble faces, modeled after CJ’s “omg I’m offended” face.) 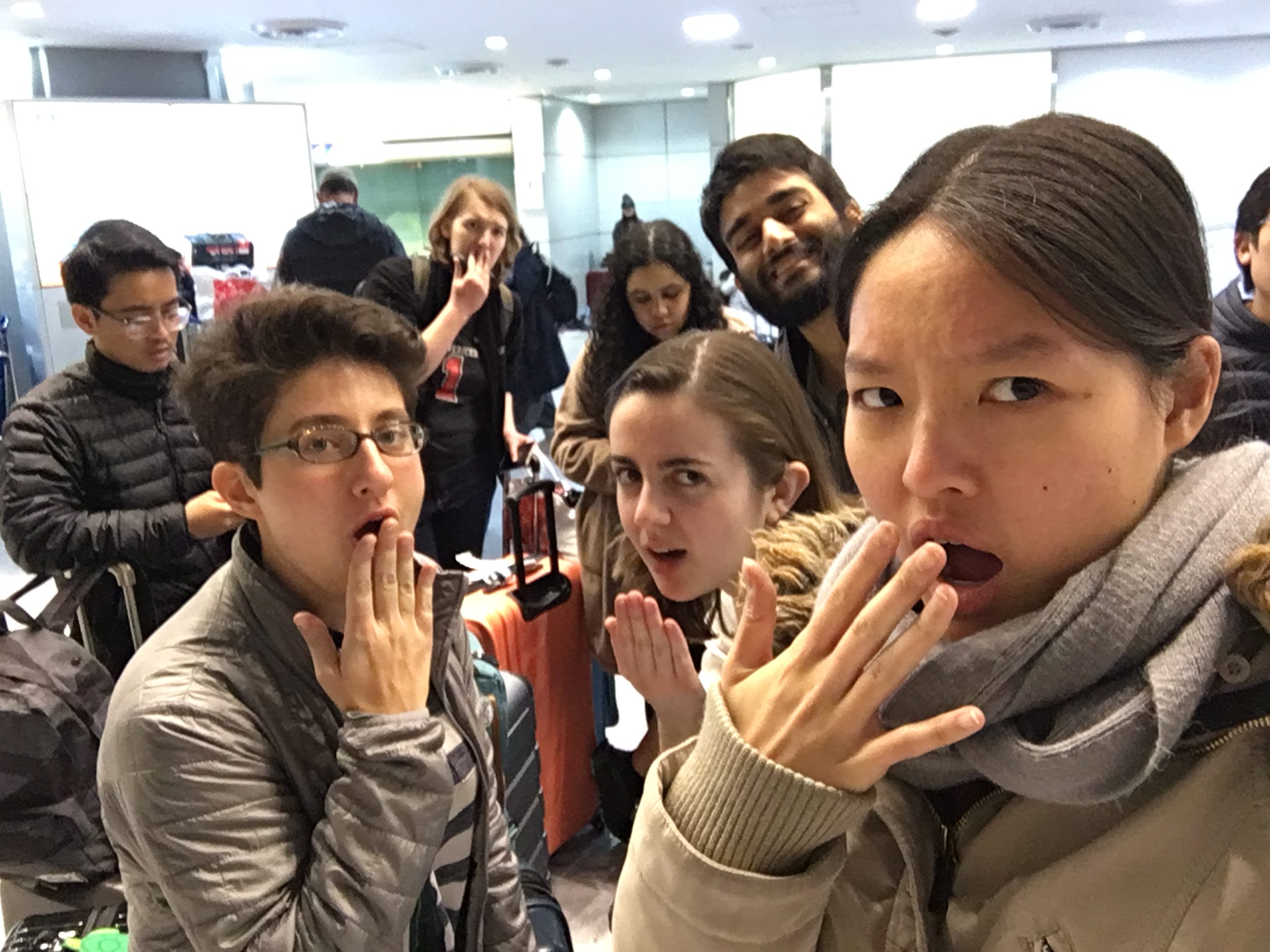 No announcement of cancellation, a minor 15 minute delay in boarding time to clean the plane that came just a bit late. No problem! We boarded without issue. And then it became a downward spiral. The first hour nothing seemed too out of ordinary; it takes a while to get the plane going after all. The second hour was full of suspicion; what is going on? The pilot comes on, saying “We haven’t fully deiced the plane. We can still fly eventually, it just seems like the deicing crew missed some spots. Doing everything we can to ensure this plane can be flown safely before we go.” Passing in and out of consciousness halfway into the third hour, another announcement: “It seems like we ran out of deicing fluid and we need to get another tank out with it. We’ve also run into issues with the flight crew needing to be changed and it looks like we’ll have to stop at San Francisco first to change crews, then Dulles.” Some more time passes, and then, “We’re going to let people get off the plane if they want to, but please stay close to the gate for announcements for boarding.” Of course, a good 3/4 of the passengers pile off. The flight was supposed to leave a little before 5PM, but it was now closer to 9 or 10PM. We grab some overpriced airport food and sit by the gate on the floor until we’re called to reboard at around 11PM.

Sitting back down at the familiar seats, we wait again for an hour or so (“Looks like we’re all deiced and ready to go after we get the final okay from the runway”) until the final announcement that sealed our fate: “It looks like we’re going to have to cancel this flight.” Fortunately, almost immediately, our flight is rescheduled. Unfortunately, instead of going from Narita to Dulles to Albany, we’re now going from Narita to Honolulu to Chicago to Albany, all over the course of approximately 48 hours.

The rest was a blur: waiting on the plane for another couple of hours while immigration and customs cleared out from the previous cancelled flights before us; being fed a plane meal while waiting; waiting in line in the immigrations and customs area that was as crowded as the NYC Chinese Consulate but 5x as large; being handed sleeping bags, water bottles, and vaccuum packed crackers with “rescue relief” printed on the side, settling in the outer parts of the airport with many other passengers, one of which was planking on an elevated, circular bench around a potted plant; and finding a semi-empty place in front of a turned-off montage where we put down our sleeping bags like sardines and slept on the marble floor at 3AM, only to be woken up by the blinding sunlight at 8AM. 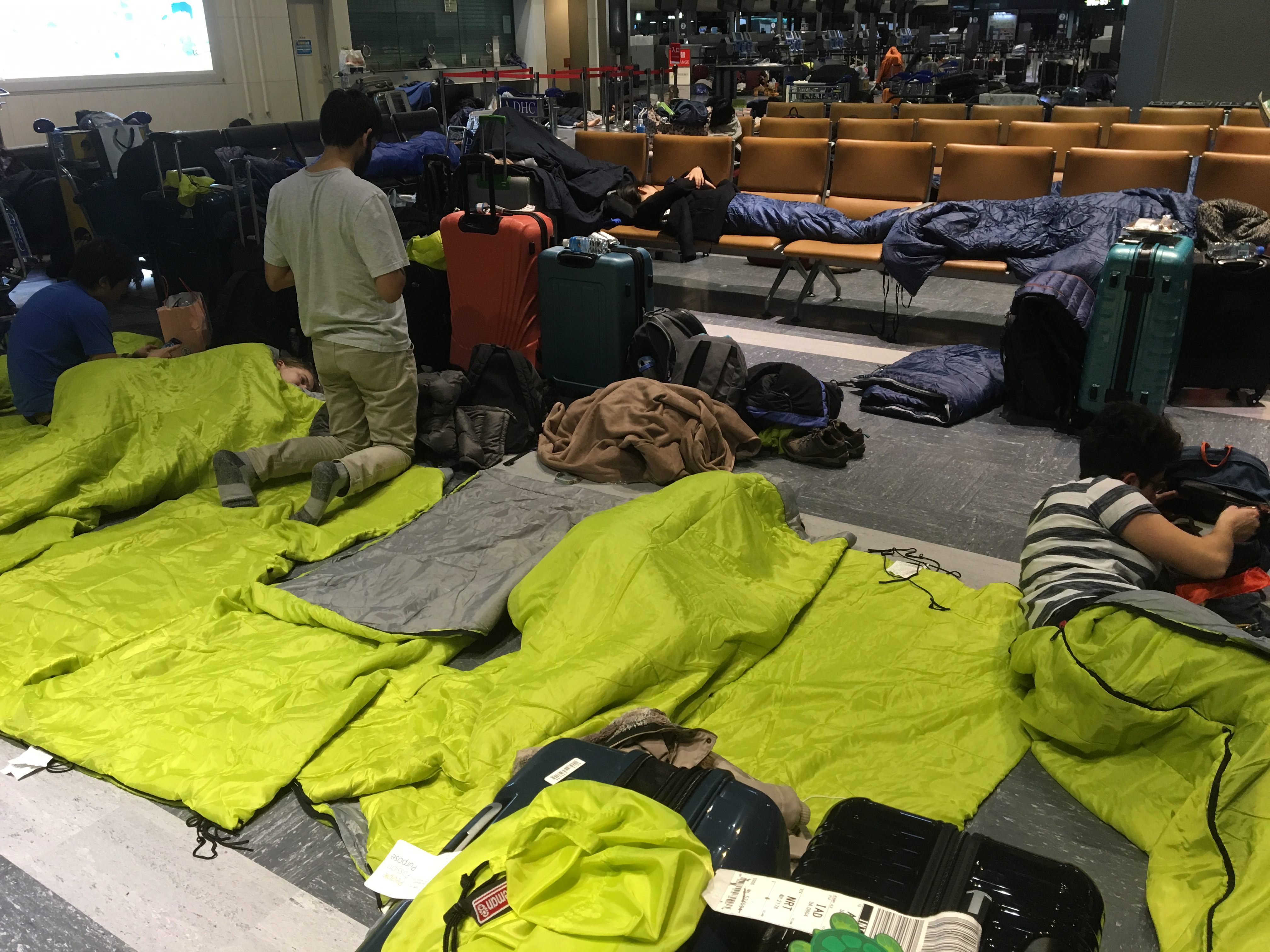 This was a blessing: Yamamoto-sensei, our savior back at the Japanese department at Williams, told us our travel agency found a flight going straight to Newark (then Albany) at 5:55PM. In that moment, I think I saw the light, but not in the form of looking straight at the sun through the large cascading windows in front of me. Thus after came breakfast: Soup Stock (and for lunch, ramen), more omiyage-buying, more hours of line-waiting, and then gate-waiting, and we were finally able to go home (I even got permission to have my parents pick me up in good ol’ New Jersey). 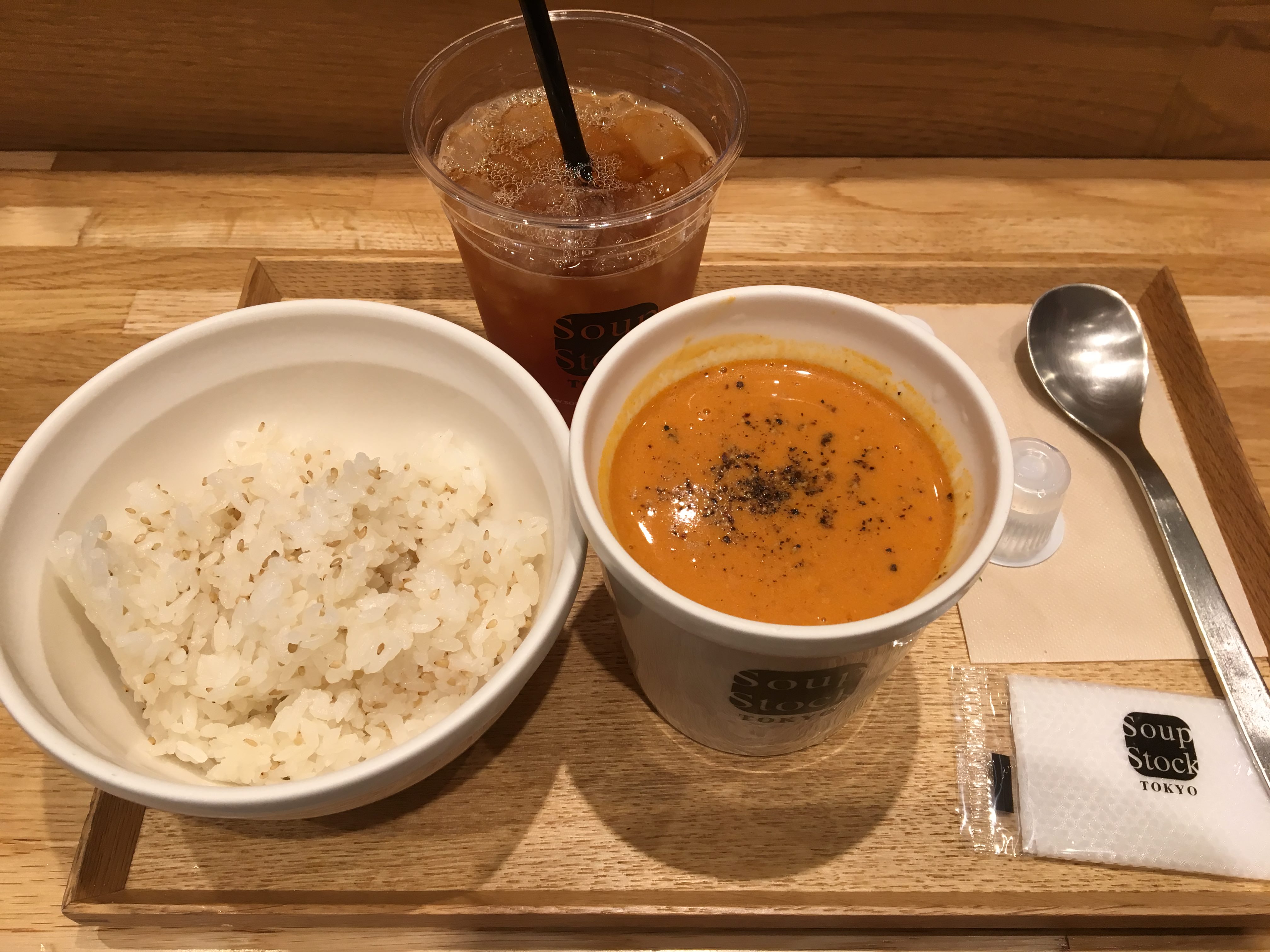 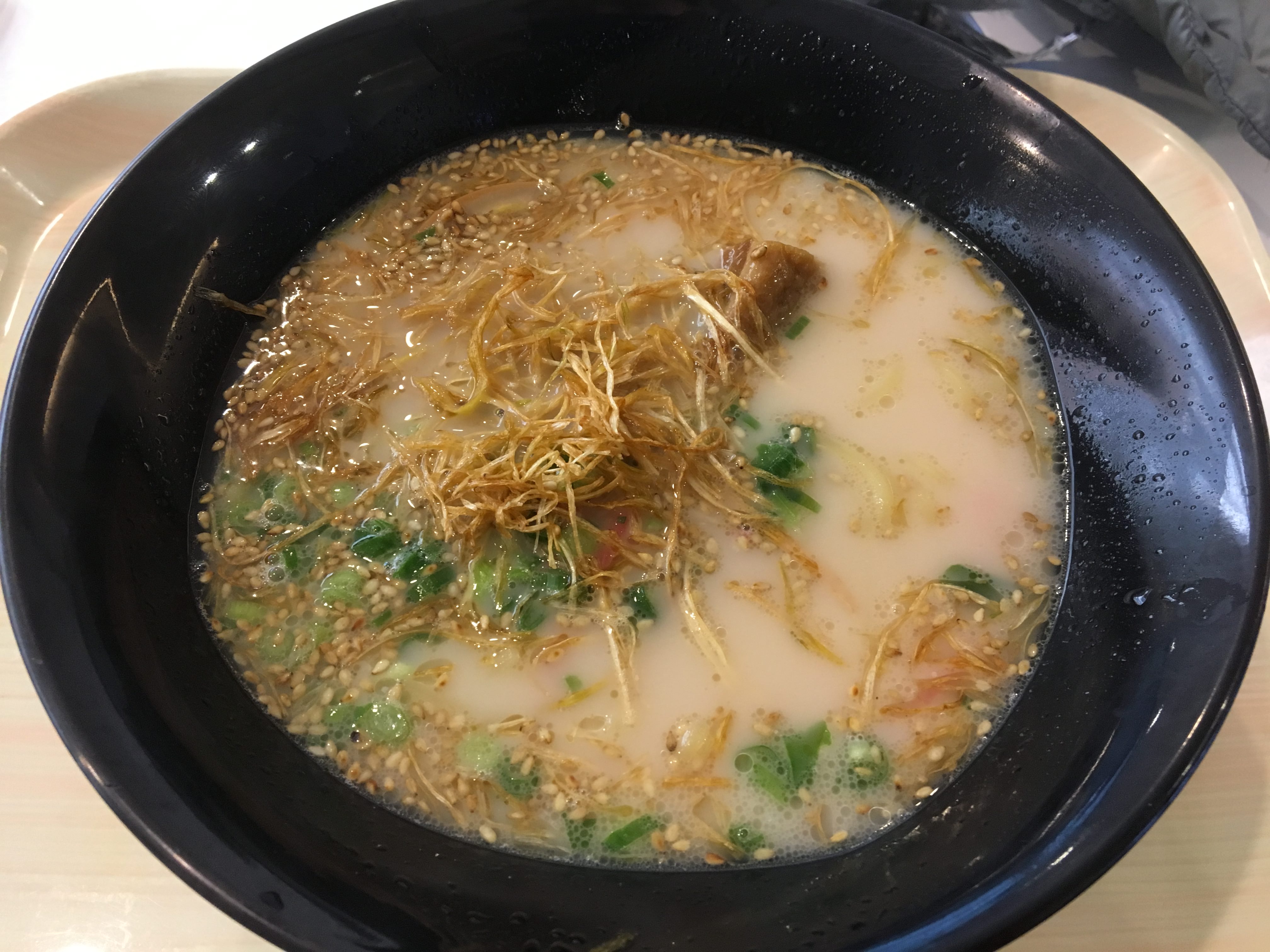 In retrospect: this could have been a lot worse. But also, it could have been a lot better! There’s really nothing to say about this all other than “shikata ga nai” which means essentially that it cannot be helped. I can’t help but think this new perspective change did somewhat come out of the course of our trip here. Usually, I would grumble and bemoan my situation. While there’s no doubt in my mind that I did, there was a sort of humorous, yet calm feel to it all. I mean, just look at Franky and Leah, taking it like champs. 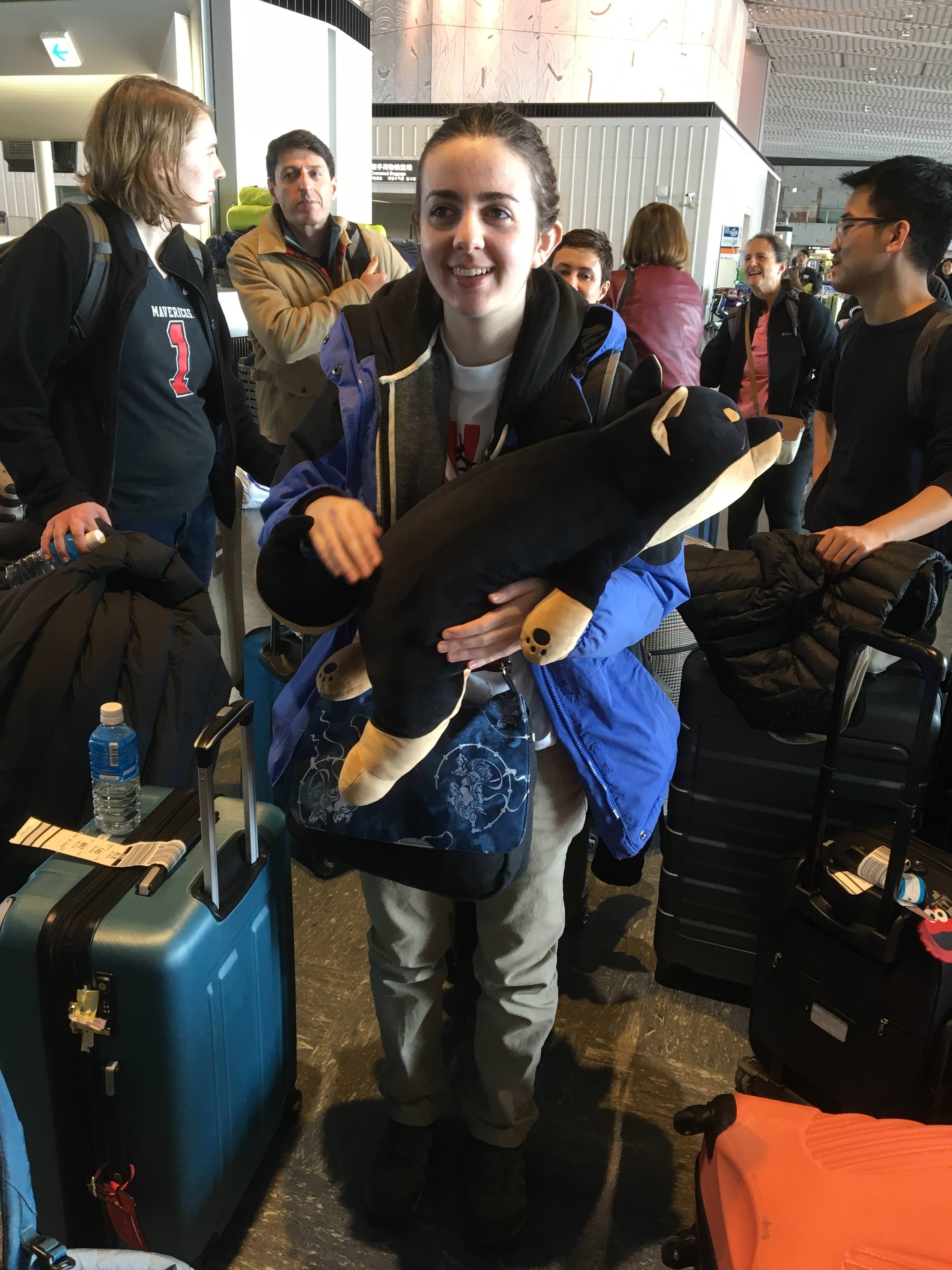 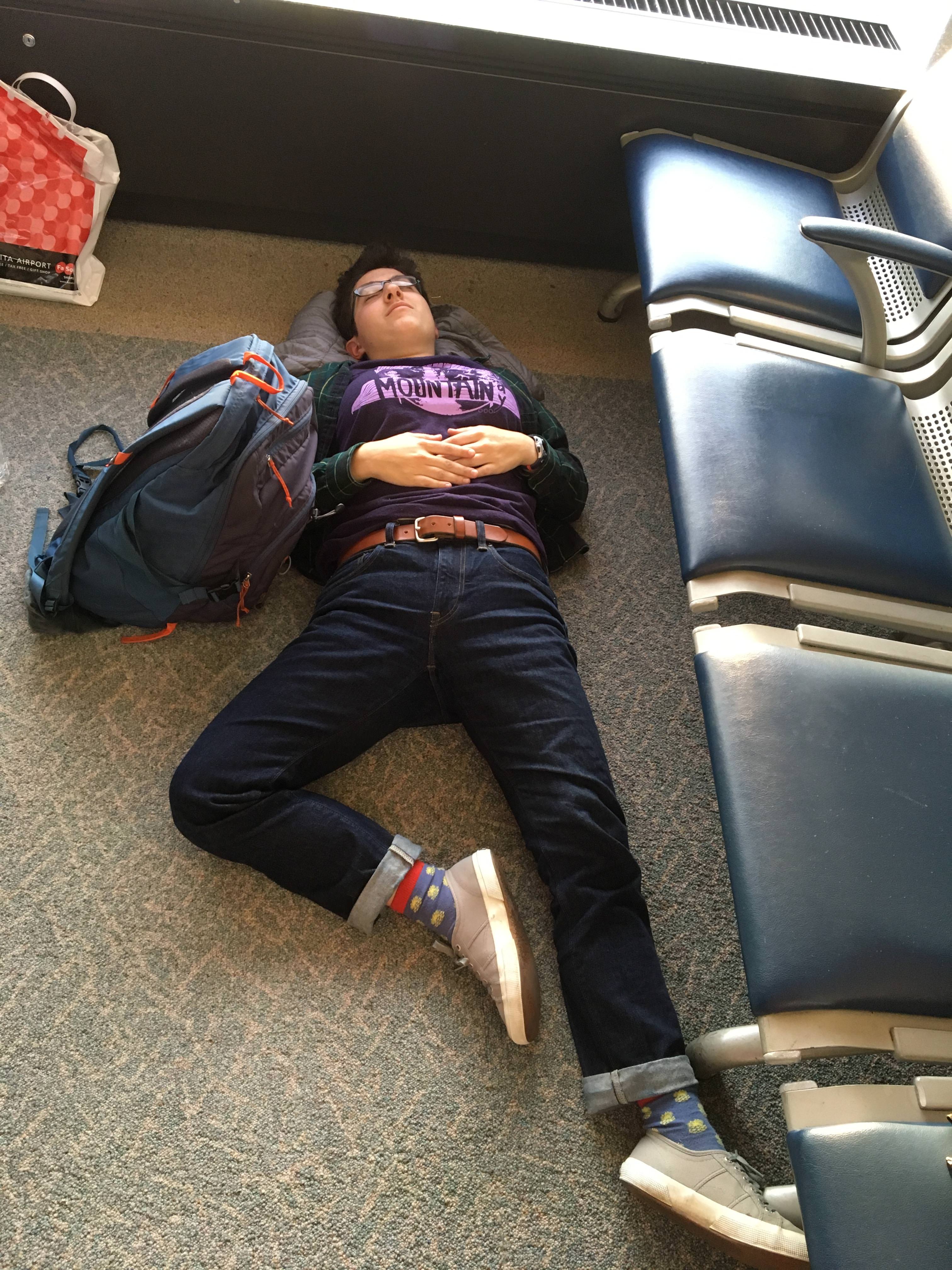 I can’t help but say that going to Kyoto and experiencing many different ways and perspectives on life really broadened my view of my own. While I studied abroad in essentially Tokyo (technically, Chiba) and I always considered myself a city girl–coming from a town where most people commute into NYC and soon-to-be moving to Boston for my job–Kyoto really gave me a run for my money. A place where urban life blended in quietly and peacefully with history and culture, where there was always a place to relax without background exhaust pipes, and where I learned that there is never a bad time to stop yourself, to look around in silence, and to take in the view in front of you. At the end of the trip, I was asked on the plane if I preferred Tokyo or Kyoto, and it was the first time I had no answer. 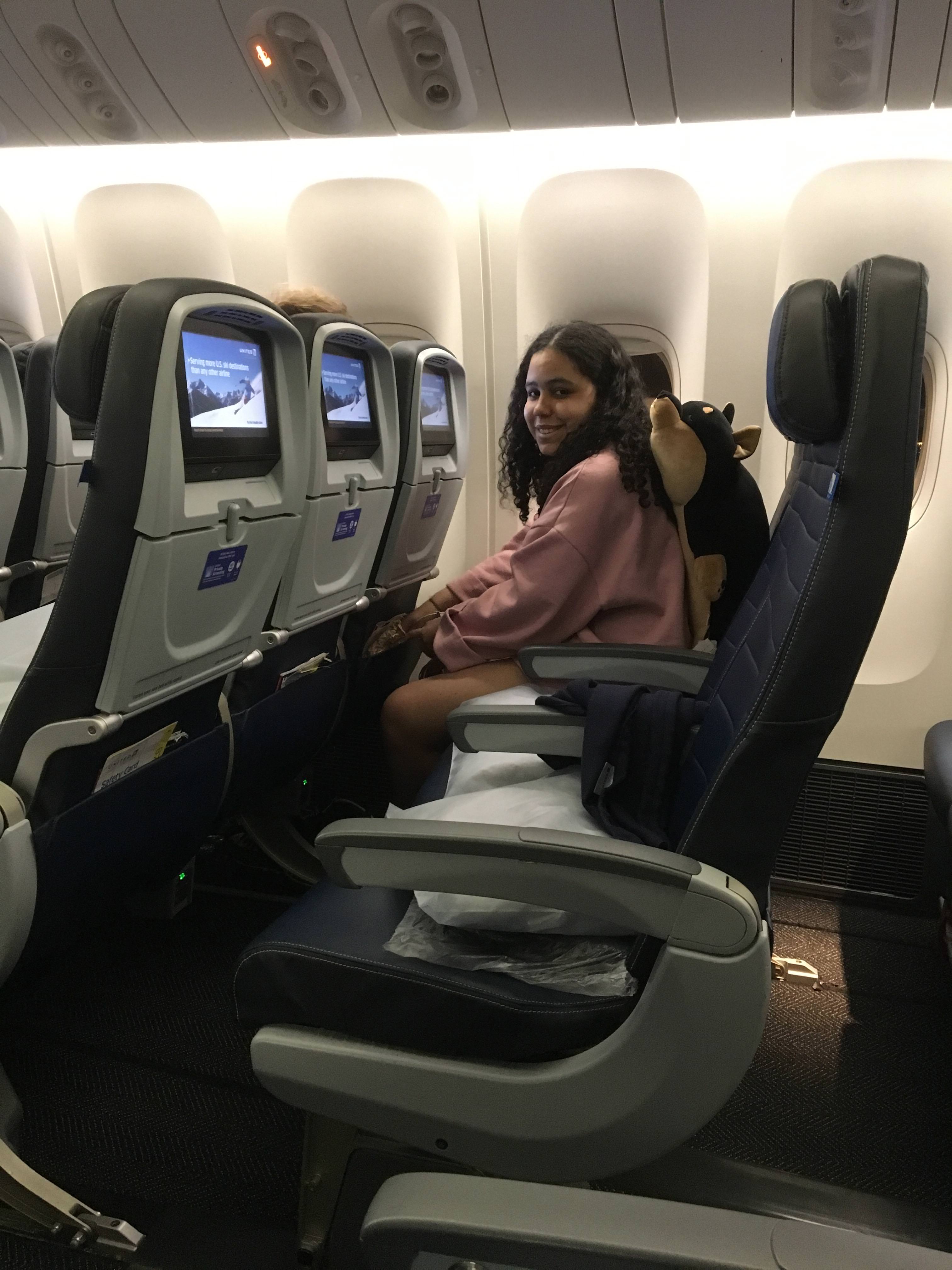 I had thought Kyoto was a cultural capital: a place of plentiful temples and shrines, so many that they all blended together (thus, going to a few would be enough), musty historical statues, metric tons of paper guides and translations of places of importance, combined with something infinitely old, but perhaps not so interesting and bustling. But, upon arriving, I developed a rabid love for zen gardens; a new habit of practicing meditation; an understanding of the livelihood that makes Kyoto the cultural capital it is through the artisans and artists preserving centuries of work; a perspective of blending of the old and the new; and also, a better understanding of myself. We spend a large majority of our lives developing our person–there’s no way for me to understand myself by just looking, well, at myself. There is also no point in time where I am fully developed. But this period of time was almost like accelerated development: meeting different people and seeing their perspectives changed my own perspectives of myself and what I thought of the people and things around me.

Perhaps it might be important to reflect individually on every single person I met and thing I saw. But what I feel is most important is to reflect on everything as a whole. All of the artisans, performers, and practitioners we visited shared many things in common. They were each dedicating themselves wholly to a certain way of life, focusing and concentrating on, in a sense, what was in front of them. Despite changing times and modernity, while outer aspects changed and features of their arts and crafts adapted accordingly, they steadfastly kept the essence of their product, essentially preserving it for future generations to understand. There is an essential part of history in Kyoto that does not–cannot–lie in history books and academic texts, and that is the experience that these art and crafts provide. You can write about an experience as much as you want, but it is a moot point unless you experience it yourself, and over the course of these past 12 days, that is exactly what we were able to do. I am thankful to everyone involved in this program for allowing me to experience what I had: a piece of history and culture that not everyone will be able to feel in their lifetime. It was a privilege to be able to do so: I understand that there are many people who are close by who will never choose to experience it, and there are many people who don’t possess the means to. Thus, I am truly grateful to be able to learn so much about Kyoto and its cultural history, as well as its face in modernity, during this program. I am also incredibly grateful to everyone that participated, and all the students I became close with over the course of these 20-something days: I’ve made lasting friendships with many of you in just a month that I feel could last for years!

As the water cap says, 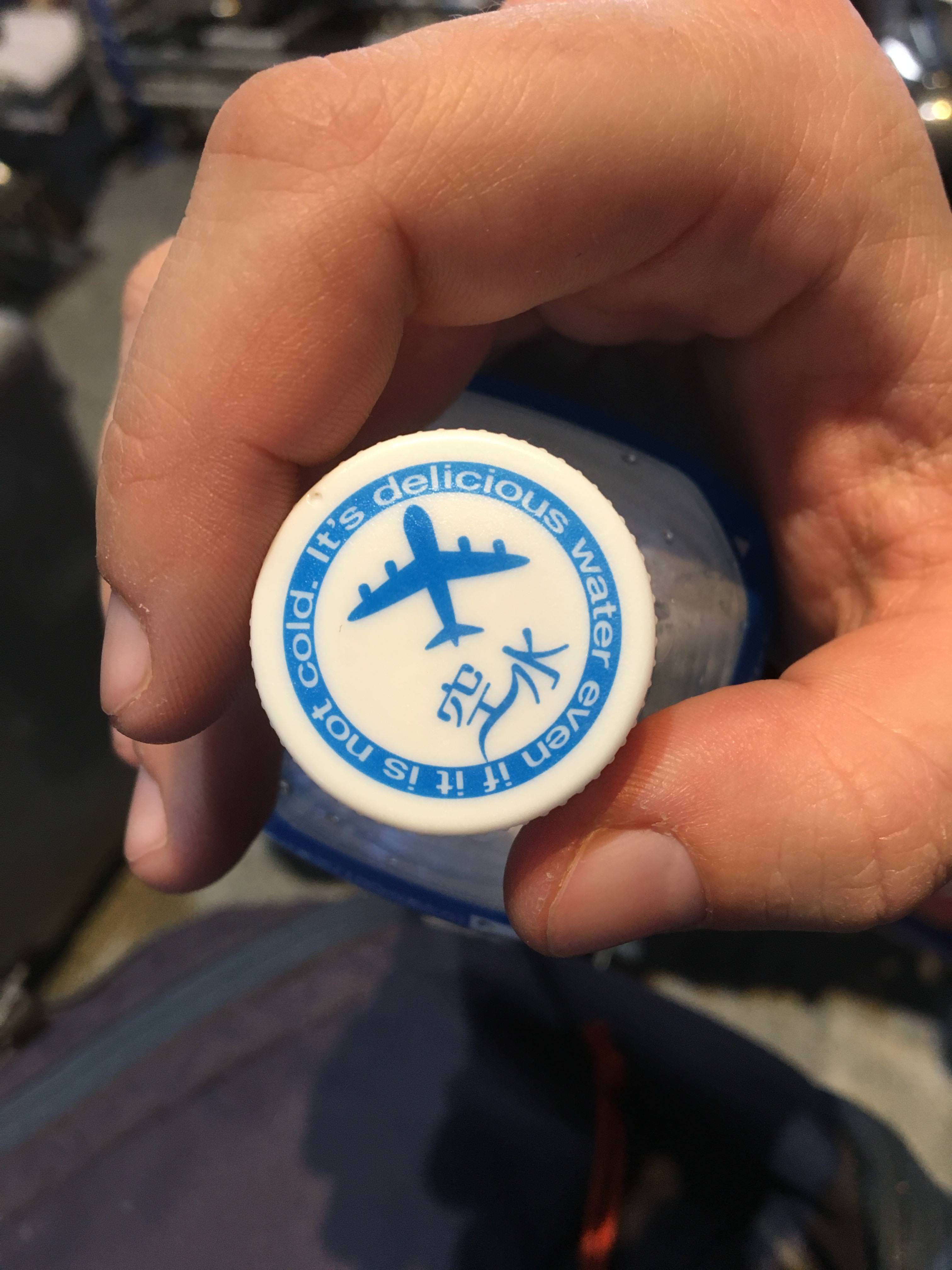 “It’s delicious water, even if it’s not cold.” (I have to say there was nothing particularly deep about that, though I could most definitely extrapolate something deep. It’s just what I thought could be a humorous end to this blog, though I’m sure it’s much less humorous if I point it out, which I just have.)