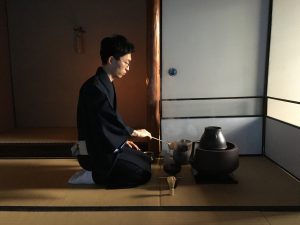 Today we met with Amae Dairiku, a young Tea Master who creates unique twists nestled within the traditional practice of tea.  To start out the day we met Dairiku at a modest and homely shinto shrine to fetch water for the tea. Dairiku described the process as a spiritual fulfilment. While you could get water from the supermarket, or get water from the tap and the end result being virtually the same, you lose the appreciation and purity that come with the exertion of labour. You fetch the water early in the morning, preferably at 3am, but 5am is just as fine. You would also prefer not to fetch on a rainy day or risk contamination. The idea of fetching the water so early from the shrine is to capture it in its purse essence.  Serving your guests the purest water is within playing the roles of a good host, and conveying that you value them as your guests. Dairiku describes the process of fetching water a catalyst for contemplation, as while his jug is filling he can take time to enjoy the nearby flowers blooming, or the fresh bamboo laid out, or in general the shrine grounds. The process slows you down and makes you more aware of your surroundings. He must then haul the water back, albeit with the help of public transport. Still there are long stretches of path where he must wheel his little cart of water. This labouring also makes him more appreciate and conservative of his water use, as he his reminded weekly by the effort that is exerted when he fetches his weekly canister. I really enjoyed talking with Dairiku along the way, and learned a bit about his life. His day job is being an Architecture, and he spoke quite passionately about joinery theory with CJ. We also spoke of our interest in lionfish, a poisonous fish that requires particular skill in preparing safely for consumption. He has also visited my country before, so that was nice to talk about. Along the journey to his house we stopped at a tea shop to purchase some tea and we got a demonstration of how to make matcha tea for personal enjoyment. While this demonstration not on the itinerary, Dairiku thought this was a good idea to be introduced to the commercial use of Matcha as a juxtaposition to the ceremony we would be performing later that day. Here, water was sourced from within the store, boiled in an electric kettle, and mixed with a technique that encouraged a smooth foamy texture to best enhance the taste. This information will become more relative later in my post. After the tea shop we stopped by a tea candy maker. The candy maker in question has been working for the past 6 years. It is hard to describe the candy, but it has a citrusy center made from fruit picked in the candymakers backyard.

After we picked up all the ingredients, we headed to Dairiku house. I really enjoyed today’s instruction because Dairiku excellently articulated the essence of tea. We first spent time practicing to focus and place objects ahead of us. I understood it to be an activity as a workshop in directing ones attention to a specific object, ignoring the world around it. 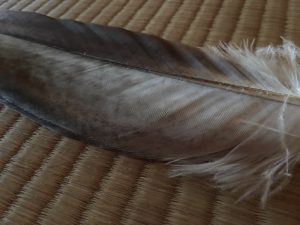 One of said objects was the feather pictured above. After this activity we went to lunch. I enjoyed the fried chicken. After lunch we split into two groups of 4, as tea ceremonies are to be held in small groups. I was apart of the first group. We went back to begin the ceremony. We were asked to enter the room one by one, and when doing so to appreciate the beauty of a flower located in an alcove, the boiling iron kettle and the shadows that were cast by the most significant light source, a flickering candle. Dairiku entered in from a smaller separate entrance and offered us tea ceremony candies that had been heated up. We broke them apart to allows the citrus centre to cool, before consuming. The wooden blocks they had been presented on where then taken away by Dairiku . Dairiku then returned and  sat up his tea making tools. This was all done in dim light, and Dairiku would later explain that he learns and memorises the steps in such a poor light condition as the dimness of the light allows participants to blend into one another in the darkness, becoming one and embodying the spirit of the tea ceremony, that is to transcend our differences. Boiling water was scooped up into a bowl, two scoops of matcha were plopped in and whisked. The tea was then served one by one. I found the individualistic approach made me feel special, as it wasn’t like 4 servings of tea were made at once. Instead, each serving was made separately. Normally I don’t like matcha, but I found the purpose driving the ceremony to be quite fulfilling, and then somehow the taste didn’t bother me. It was a formal yet some ways informal experience, one that I truly enjoyed. I had thought maybe tea ceremonies were alot stricter and anxiety inducing because I thought I would be uncomfortable sitting on the mat and be drinking bitter tea that I don’t like in a stringent environment. It was actually the opposite, and I’m happy my first tea experience was with Dairiku.

This entry was posted in kyoto-2018 and tagged Dairiku. Bookmark the permalink.