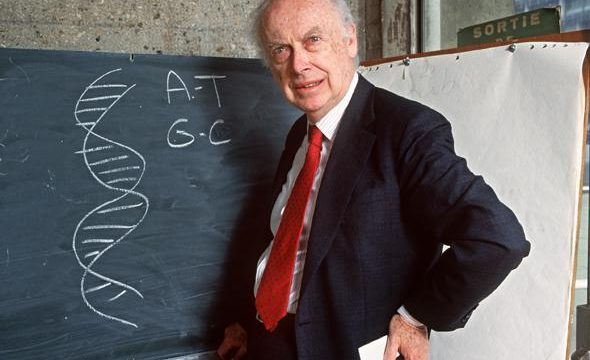 Above: Molecular biologist James D. Watson, co-discoverer of the structure of DNA and author of The Double Helix, in 1993. Photo by Daniel Mordzinski/AFP/Getty Images

While reading The Double Helix [by James Watson], I asked a friend who has been dedicated to the pre-med track and biology if he had read it before. He said no and asked who it was by. As soon as he heard Watson, he scoffed. He did a quick Google search and read aloud, “James Watson says ‘inherently gloomy about the prospect of Africa.’” I laughed, outright cackled.  My friends in the room turned and semi-chuckled and shouted, “Dani!” Apparently, my response was not appropriate at that moment.

As I read the quotes [compiled by] the Center for Genetics and Society on James Watson’s legacy, my initial response was I just had to tell someone because I thought the quotes were so ridiculous.  With this exercise I wanted to capture my friends’ reactions to some quotes by James Watson. I prefaced the readings of the quotes with “This was said by a real scientist.” Granted, my friends did not “act natural” knowing that this was going to be sent in for an assignment. Yet, it’s still interesting to see this is how they reacted.

“The Pursuit of Happiness: Lessons from pom-C ,” Watson’s lecture at University of California, Berkeley, October 2000

That’s why you have Latin lovers. You’ve never heard of an English lover. Only an English patient.

Here we must not fall into the absurd trap of being against everything Hitler was for…. Because of Hitler’s use of the term Master Race, we should not feel the need to say that we never want to use genetics to make humans more capable than they are today.

If you could find the gene which determines sexuality and a woman decides she doesn’t want a homosexual child, well, let her.

[A]ll our social policies are based on the fact that [Africans’] intelligence is the same as ours – whereas all the testing says not really… [P]eople who have to deal with black employees find [equality] is not true.