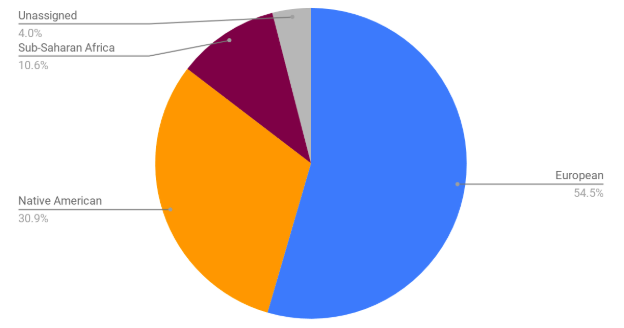 Today we are joined by [José] Vasconcelos, a Mexican thinker, philosopher, and politician, and [James] Watson, a world famous geneticist, as we tackle a controversial topic that both parties have talked extensively about in the past: the perfect human. We will be pitting cultural theory versus contemporary genetic science in an attempt to learn more about the “perfect” human. What does this person look like? What can we learn about the future of the human race by looking at the genetic ancestry of the “perfect” human? Is a “perfect” being even genetically possible?

Welcome to our podcast, The Cosmic Question, hosted by Emma and Bernal. Today we are joined by Vasconcelos, a Mexican thinker, philosopher, and politician; and Watson, a world famous geneticist, as we tackle a controversial topic that both parties have talked extensively about in the past: the perfect human. We will be pitting cultural theory versus contemporary genetic science in an attempt to learn more about the “perfect” human. What does this person look like? What can we learn about the future of the human race by looking at the genetic ancestry of this so called “perfect” human? Is a “perfect” being even genetically possible? Join us today as we address these questions and other pressing issues regarding the perfect human!

I, Emma, will be talking from the point of view of Jose Vasconcelos. To introduce him to our listeners: he has been called the “cultural caudillo” (military or political leader) of the Mexican Revolution. He is one of the most influential and controversial personalities in the development of modern Mexico and is the author of The Cosmic Race or La raza cosmica, which affected all aspects of Mexican sociocultural, political, and economic policies. It was published in 1925 and it expresses the ideology of the future fifth race in the Americas. It is the seminole text we will be looking at to touch on these issues of the perfect human and what the future of the human race might look like.

And I, Bernal, will be playing the part of Watson, James Watson. He was credited with the discovery of the structure of DNA as being a double helix. He won the Nobel Prize for this discovery, however he remains a controversial figure. In the actual discovery of the structure of DNA, he used a critical photo taken by crystallographer Rosalind Franklin. He attained this photo without her permission and when he finally published the report, she did not receive any recognition. Regardless of that, he has been credited with the discovery and has attained international fame. Later in his life, Watson took over the Cold Springs Harbor laboratory in Long Island, New York and turned it into a hub for gene research from which Watson helped establish the Human Genome Project. It successfully sequenced the entire human genome. In 2007, Watson came out and made some unacceptable comments concerning the intersection between race and intelligence. As a result, Watson was excommunicated from the scientific community and lost all income. Later in 2014, Watson became the only recipient of the Nobel Prize to have sold the physical prize itself in order to sustain himself and re enter the scientific community for $4.1 million. It is undeniable that the science behind the structure behind DNA is fact based, but we are going to be pitting Watson’s questionable racist ideology against the science itself.

The first question we would like to tackle today in looking at these two figures together is: What would the perfect race look like? From the point of view of Vasconcelos, he believes that the perfect race is that which combines the “four racial trunks: the Black, the Indian, the Mongol, and the White” (Vasconcelos, 405). In doing this, he is effectively taking the best from each racial category and creating a future that is better than the current present or anything that has come before. He says that white men “having fulfilled their destiny of mechanizing the world, they themselves have set, without knowing it, the basis for a new period: the period of the fusion and mixing of all peoples” (407). These are the perfect conditions under which the universal, or fifth race, can exist. The cosmic or perfect race to Vasconcelos has no historical precedent, and is a manifesto that is aggressively future and forward thinking. He states: We belong to tomorrow, while the Anglo-Saxons are gradually becoming more a part of yesterday” (408). He also states that the cosmic race is the universal desire of the Americas, which is interesting given the fact that he is just one person conveying these ideas. “The future race will not be a fifth, or a sixth race, destined to prevail over its ancestors. What is going to emerge out there is the definitive race, the integral race, made up of the genius and the blood of all peoples and, for that reason, more capable of true brotherhood and of a truly universal vision” (408). It is the endpoint in achieving a perfect society.

Watson, on the other hand, has never come out an explicitly addressed the notion of a perfect race in the same way that Vasconcelos has, but some of the things he has been credited with saying allow for us to be able to speculate on what Watson’s perfect race might look like. The quote that Watson was excommunicated for in 2007 was surrounding the intersection between intelligence and race. He said that intelligence is more based on the DNA and not opposed to nature or nurture. He said that black people and “africans” do not have the same intelligence as the white man according to testing (Center for Genetics and Society). This is really irresponsible of Watson because it disregards the fact that in the United States today the way people grow up is not correlated with race or socioeconomic class. He has additionally been quoted as saying, “here we must not fall into the absurd trap of being against everything Hitler was for… Because of Hitler’s use of the term Master Race, we should not feel the need to say that we never want to use genetics to make humans more capable they are today” (Center for Genetics and Society). We can see that Watson again is espousing Hitler’s values, claiming that the master race would make humans more capable and directly contradicting the mixed race of Vasconcelos. For Watson, in summary, the perfect race would not be a mixed race. It would be a solely white, European based race because according to him their intelligence is genetically determined.

Our next question is: How would we get there? How do we achieve this perfect race? Like we have already mentioned, according to Vasconcelos the “The white man, as well, will have to depose his pride and look for progress and ulterior redemption in the souls of his brothers from other castes. He will have to diffuse and perfect himself in each of the superior varieties of the species, in each of the modalities that multiply revelation and make genius more powerful” (407). Here he is essentially stating that the white man has to stoop lower and take one for the team in order to mix with the other three racial trunks. The perfect race relies on this distribution of whiteness as much as the white man is willing to disseminate it. It will be superior because it will be “accomplished according to the laws of social well-being, sympathy, and beauty” (410).

Now to discuss how Watson would get to the perfect human race, this is where things begin to look dangerous. Considering his platform as being such a powerful and famous scientist, the danger is that he is advocating for scientific methods to promote the perfect human race, or his white race. He has been quoted as saying: “My view is that, despite the risks, we should give serious consideration to germ-line gene therapy. I only hope that the many biologists who share my opinion will stand tall in the debates to come and not be intimidated by the inevitable criticism… If such work be called eugenics, then I am a eugenicist” (Center for Genetics and Society). Germ-line gene therapy is the alteration of genetic information in gametes, or egg and sperm, so that this change is heritable and passed down over time. This is especially powerful because Watson is saying that it is possible to genetically alter humans to be perfect, and his view of perfect is white. Considering Watson’s status as a scientist as opposed to the theoretical background of Vasconcelos, these kinds of ideas are dangerous because they are delivered under the guise of scientific possibility. He also said, “If we could make better human beings by knowing how to add genes, why shouldn’t we? What’s wrong with it?… Evolution can be just damn cruel, and to say that we’ve got a perfect genome?” (Center for Genetics and Society). Watson is completely and totally for the physical intervention in the human genome to make it more desirable and white. So how would Watson get to the perfect race? Scientifically, through eugenics, and the modification and alteration of genes.

We thought it would be interesting to compare this conversation with the DNA results of a Latinx person. When we look at the results, we see that this person is 54.5% European, 30.9% Native American, 10.6% Sub-Saharan African, and 4% unassigned. The majority of whiteness and mixture with three of the four races mentioned in Vasconcelo’s The Cosmic Race show that this person is in fact a variation of the “perfect human.”

Now Watson would vehemently disagree with this conclusion. As discussed above, the perfect human is one that is totally white. The mixture of Native American and Sub-Saharan African would tarnish the intelligence of the white person because Watson assumes incorrectly that intelligence is DNA based.

An article published in 2014 on Medical Daily claims that the perfect human is a Puerto Rican woman in terms of DNA and genetics. These women tend to be 50% European, 30% West African, and 20% Native American. This large spread in mix would account for the best genetic diversity and good allele distribution. The people with the best alleles, or genes, in terms of disease are those of mixed race, especially the Puerto Rican. More genetic diversity means that a person is less susceptible to a disease that plagues only a certain race (Borreli).

What Watson did not realize, and it is very interesting to have another contemporary voice in the conversation, is that research like Dr. Gerome Breen of Kings College London have delved into the possibility that being of mixed race allows for more genetic diversity. This protects them from everything from parasites to diseases. Dr. Breen conducted this entire study in Brazil that basically said that people of mixed race are actually able to handle stress better (Borreli). Those living in Brazilian favelas suffer from the same amount of stress as those in affluent suburbs, but are able to manage it better and feel the effects of it less, going against Watson.

This article also states: “Diverse genetic ancestry could be the gateway to attaining better health,” perhaps Vasconcelos was onto something after all.