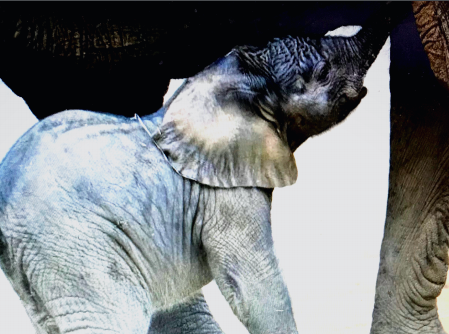 ZsaZsa Morel’s visual work is often multi-layered, whether it is a collage, or a drawing, or a photo essay. She is most proud of her photonegative essay and the short comic “The Creation of the Elephant Story.” Both use editing to change the visual effect of photographs and render them less realistic and more fictional. The images and text correspond with each other and effect the tone and mood of the narrative.

She often works meticulously with a special attention to details. She likes to leave her work open for interpretation, despite her own intentions for the metaphors and symbols. Inspired by classic and contemporary novels (favorite genres: realism and dystopia) and children’s media, her drawings are simple, but effective. Her older brother is a multi-media visual artist who also raps and makes his own beats, so she has grown up seeing the process of artistic creation and having discussions about her brother’s work. The idea for this final project was even sparked by something he said.

Over the course of the semester, ZsaZsa has learned to combine photography, origami, and layering to tell the story of Lenny the Elephant. In her free time, she likes to make origami figures by following YouTube videos.  After struggling to find a visual form that could show the events of the story while adding its own layer of interpretation, she finally decided to take photos of her origami figures staged in front of digital images displayed on a laptop screen. The background images represent an alternate reality for Lenny, while the origami represents his personal experience in a paper world. Her boyfriend recommended that she try this visual form for Assignment 8, and she then decided to continue with it for its ability to showcase multiple artistic considerations and accompany the story with additional interpretations.

In the future, ZsaZsa dreams of developing children’s stories for a media company, or editing and publishing novels and graphic narratives. She would also like to learn how to make stop-motion videos and animation.

The main themes of Lenny the Elephant are freedom, family, and identity. I imagine this story as a children’s picture book for ages eight and up. Lenny learns his origin and background, which form a part of his identity along with his experiences both inside and outside of the circus. Lenny asks questions and has an active imagination. He seeks personal freedom, but remains loyal to his mother. Lenny’s self-determination leads him to discover answers and find freedom in the power of community.

I decided to use an online platform called Canva to arrange the pages of the book. The arrows allow the reader to flip through the pages, however it only shows one page at a time. Although I would have preferred the pages to spread open, this view instead allows the reader to focus on either the image or the text and then think about their relationship. I used origami paper from Walmart to make the figures, and my iPhone 7 to take the photos.

The greatest challenge in making this project was choosing which background images should be displayed for each photo of the origami. I wanted to be able to cite the image properly, so I looked for digital images with a photographer or artist listed. For the assignments I used patterned backgrounds and free clipart images because they showed another fictionalized world as Lenny’s backdrop and emphasized the colorful animation of the origami. However for the final I have chosen mostly photographs of real circus elephants as the background images, because they show the contrast between Lenny’s fiction and potential reality.

no images were found