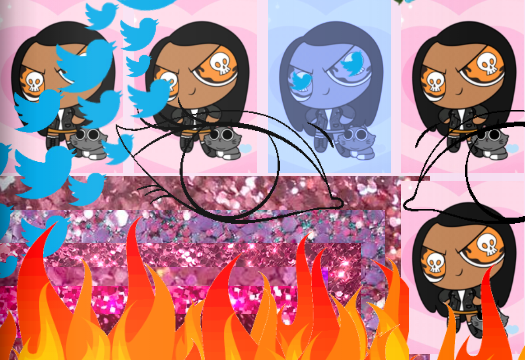 When I initially began this project I was interested in using some combination of drawings, comics, collages, and photos. As someone who had trouble deciding and committing to any one form over the semester (as you may know), I naively convinced myself that I would find some type of way to seamlessly weave all four together. I realized rather quickly and much to my dismay, however, that this was an ambitious task. And, so I settled on handmade collages and hand-drawn comics, with the aim of publishing these works on a Wix website. Although, the site was going relatively well, I was frustrated with the amount of time I was spending on creating it. I realized days in that I would much rather spend time working on my collages and drawings than on customizing the site. In light of this, I figured that perhaps it’d be more fitting if I assembled my project in the form of a scrapbook. I’d always been interested by scrapbooks as archival documents and thought that this would be a unique way to resist the digitization of life. I also thought that a scrapbook would be a pleasant throwback to my middle school days.

The scrapbook, however, wasn’t quite cutting it. You see, given that my content was focused on the digital world, I still wanted my work to be digital in some capacity beyond just the content itself. So,why not a digital scrapbook? I had previously heard about a website called flipsnack which lets you generate free digital e-zines. Upon checking it out, I realized that I finally had found what it was that I was looking for. On flipsnack, I could easily assemble and manipulate photos to create collages and spreads.

In terms of stylistic influences, I was particularly captivated by the visual styles employed in Isabel Quintero’s Photographic: The Life of Graciela Iturbide. I found that the use of both photos and drawings truly bought the text to life. I also absolutely loved Laylah Ali’s Notes with Illustrations and carried it with me whenever I worked on the final. I found the lists, in particular, to be an interesting way to convey information. I adopted the style and created lists throughout my narrative to keep track of the diﬀerent topics I tweeted about throughout my years. To some extent, these lists operate as a timeline and oﬀer the reader a glimpse into what was/is going on in my head during certain points in my Twitter career. I especially appreciated how these lists could deliver this information in a succinct, clear, and pointed manner.

Admittedly, my creative work this semester felt a bit tumultuous. As ridiculous as it may sound, I was afraid of “creating.” It’s funny and ironic, because although I’m one to color outside the lines in most domaines of my life, I was afraid to take such risks in my creative process. This semester, however, has taught me that perhaps I was a little too in my head. I’ve come to peace with the fact that ideas in my head may not always translate perfectly into reality.

My favorite assignment this semester is definitely my comic reportage collage on the virtual panopticon. Although it was hard to acquire magazines on campus, there was something therapeutic about collaging. From carefully cutting out images to meticulously gluing them in certain spots, I enjoyed how absorbing this multi-step process was. I also enjoyed how intuitive it felt to collage. As someone who’s always caught between overthinking and simply trusting my intuition, there was something eﬀortless about how I created the collage. Of course, I recognize that not all creative processes are meant to be eﬀortless.

In the future I would love to work on two diﬀerent graphic narrative projects. For one, I’d like to translate Yemeni folktales and turn them into graphic narratives for diﬀerent audience groups. When I first had this idea, I was primarily interested in creating children’s books. However, this class has demonstrated to me the power of storytelling in graphic narratives, and so I’ve begun to consider. For my second project, I would absolutely love to create narratives and even an animation based on diﬀerent sociological concepts and studies. Given the inaccessibility of academia, I’m interested in using graphic narratives as a way to bridge the gap between the general public and academia. Yasmine Bouagga accomplished a similar task in her graphic narrative “Les Nouvelles de la Jungle.” I appreciate how inviting graphic narratives can be and I think that this would be a really cool way to provide information in a consumable manner.

My project essentially dealt with how I, as a Twitter user, have changed over time. I was interested in sifting through the diﬀerent online and oﬄine influences that have shaped my identity today.

Interestingly, given that I have been a user for seven years, Twitter operated as a lens of sorts through which I could track my personal growth. Although, I didn’t quite realize it at first, it was truly a compelling and interesting tool to reflect on who I was and and who I am becoming. As I read through old tweets, I found myself chuckling at how much I’d changed over the years. To think that Twitter captured all that! In some sense, it’s a crossover between a time capsule and a public diary.

In terms of the form, I created three diﬀerent digital scrapbooks with each one chronicling a diﬀerent saga of my life from the past seven years. The title of my work is “Organizing Chaos.” I’ll admit the title just kind of came to me. I don’t really have a concrete definition for “chaos,” but I will say that it’s a phenomenon that has always fascinated me. In fact, my twitter bio is “organized chaos.”

In Part One, I focus on the naivety and innocence with which I approached Twitter. For 16 year-old-me, Twitter was the perfect outlet for my teenage angst. Part Two deals with how my burgeoning political consciousness influenced the way I used Twitter. And, finally, Part Three focuses on how I took a step back from it all and thought critically about Twitter as a platform. The photos I used are from a trip I took this summer to Cappadocia. I’d also been mesmerized by the infinite-like quality of deserts, and wanted to include the desert pictures. In my opinion, these images not only instill a sense of contemplation and dreaminess in Part Three, but allow for the desert to emerge as a character itself.

Specifically, the desert’s emptiness and barrenness strikingly contrasts the connectivity of the Twitter world. 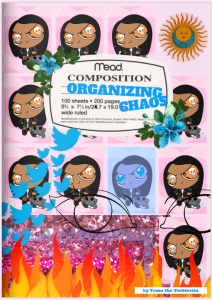 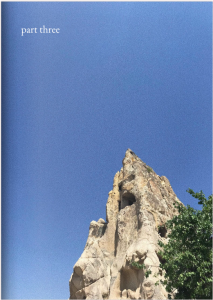