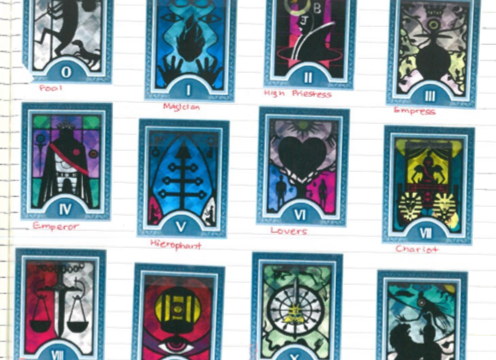 A BEGINNER’S GUIDE TO TAROT

A Beginner’s Guide to Tarot

My choice of form was heavily influenced by my past experiences in creative writing and was infused with influences from bullet journals, instruction manuals, visual journaling, and graphic novels. A lot of my work includes adding image as figures to support the instructions or the narrative, but less so as a planned graph for a textbook than sketches that arise organically from writing about the subject. A sort of free-form writing where each word doesn’t necessary have to arrive next to the previous one, where it doesn’t have to go down line by line with equal spacing.

The themes of my work involve layers of irony, whether it’s based off of lying to another, lying to oneself, trying to convince oneself in vain, projecting onto others in a blatantly wrong way. Unreliable.characters and narrators, characters that leave you going back to the source, to look back at their dialogue wit.Li. new context to discover what exactly was going ou in their heads. This interest in unreliable characters was combined with an old, but still lasting fascination towards magic. Considering the popular conception today that the world is ruled by rationalism, that there is no such thing as magic, that everything can eventually be distilled down into calculations and provable equations, the recent rise in astrology and modern mysticism speaks to how people want to see the world compared to what they have tried to convince themselves of how the world is. Thus this work aimed to fold together this interest in narrative/character-based irony and the irony that’s seen in new age mysticism.

Compared to the beginning of the semester, where I mainly saw graphic narrative forms as graphic novels and movies and video games, where most of the time visuals feel like they’re there to get rid of writing descriptions so the audience can just have the visual and the dialogue, the various types of pieces that we’ve seen have developed my idea of graphic narrative and what can be manipulated with it. Although I have used comic form often even near the end of the year, I feel like I have been able to use visuals better to give context to a reader, such as the use of random newspaper headlines in The Stars assignment. It also gave me a better sense of how to frame everything spatially, .and how to work around whatever physical/spatial boundaries are in a visual form.

Working on this final project A Beginner’s Guide to Tarot, or How to Get Someone to Believe in the Heart of the Cards, in particular, has led me to better understand how to make use of a notebook spread, and generally explore new ways to wotk with paper. And although, because of the time limit with this final project, there’s much more I’d like to be able to improve and extend it, it’:; the assignment that I’m most proud of. It features a protagonist that I have had in my head for several years now, and I haven’t been able to share him outside of a couple of short drabbles, so I’m glad to be able to showcase him in a bigger project and in a way where his intentions aren’t shown as explicitly due to the facade of the instruction manual. In the future, I’d love to extend this when I have time because I know that I can take up the entire notebook and then some, because I like working with more gradual, slower narratives. Alas, looking through these first pages, you only get a hint of a hint of what he’s going through, but I hope to make this into a piece where you learn something new every time you read it again.

A Beginner s Guide to Tarot, or How to Get Someone to Believe in the Heart of the Cards, will focus on themes of value in a capitalist (and increasingly tech-focused)  society, narration/memory and how a person creates their self through the way they view their experiences, and a bit of queer rebellion through asserting oneself as different.

The project will be created in a physical notebook with visual aspects such as diagrams (eg. tarot spreads), sketches (eg. cards, various thoughts), and also includes more collage-like pages where ripped pieces of booklets and poems and diagrams are also used to help tell the narrative. Words are also not just typed, but handwritten, thus giving the flexibility to use letters and words like images based on factors like placement, color, and typography. As someone who is used to expressing creativity solely through words, this will be an experiment in putting together words with other visual formats, not as a way to plan for a :final writ'”i.eu product, but to be integrated into the product Images and printouts of quotes may.also be used.

Challenges for this project included keeping track of the layers, of the outward selling of tarot through the perspective of a conman, to the pretentious literary and mythological references he uses to barely mention people in his life, to the lies he tells himself, to the truth. This isn’t something that would just be a struggle structurally, but also a struggle to show and hint at throughout the work. There’s also the issue of respect. The purpose of the. project isn’t to make fun of the resurgence of Tarot and other New Age spiritual practices, but to show the narrator’s insecurities and feelings of-emptiness through a farce version of witchcraft. In the same way that fantasy novels aren’t made to be an affront to religious institutions, A Beginners Guide to Tarot isn’t made to be an attack on any spiritual practice, so the level of satire from the narrator needs to be carefully dealt with. Such is a common issue with unreliable narrators.

Another challenge, which is more specific to the medium, is the use of space in the fixed size of the notebook pages and how to utilize the spatiality of the page once visual aspects are introduced. I also have a tendency to prefer longer, more drawn out narratives and I only had so much time with this assignment (and homework in other courses). 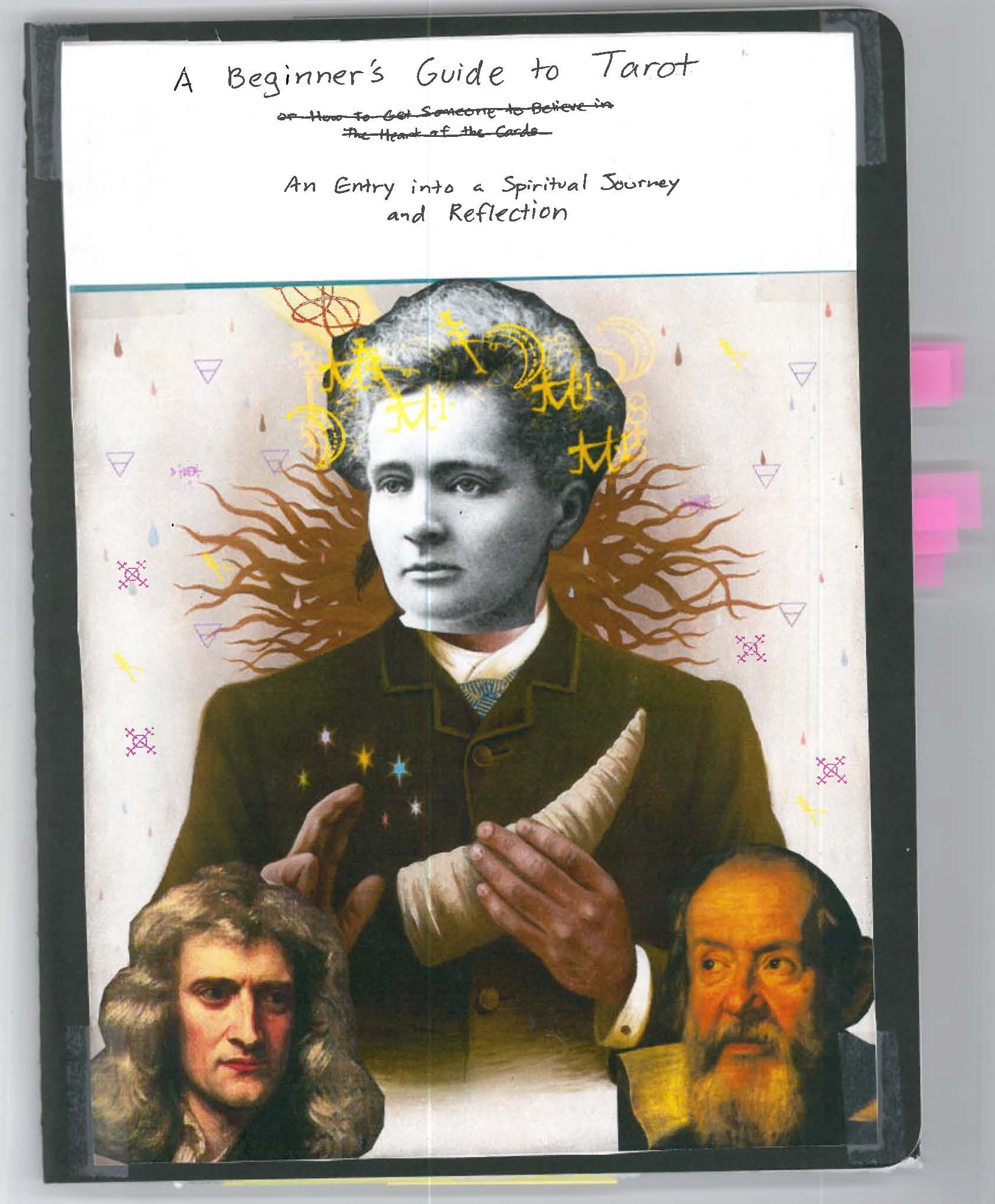 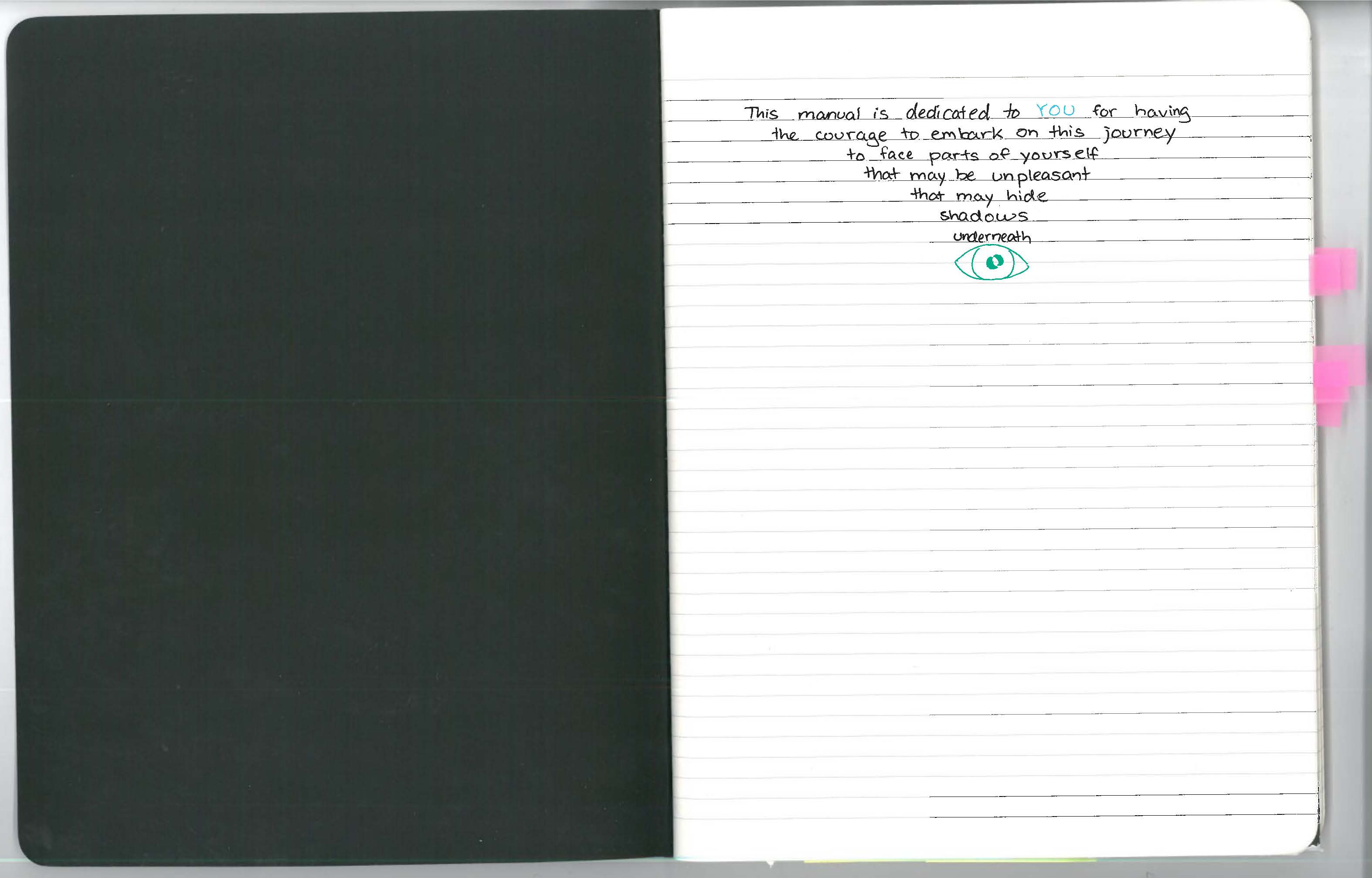 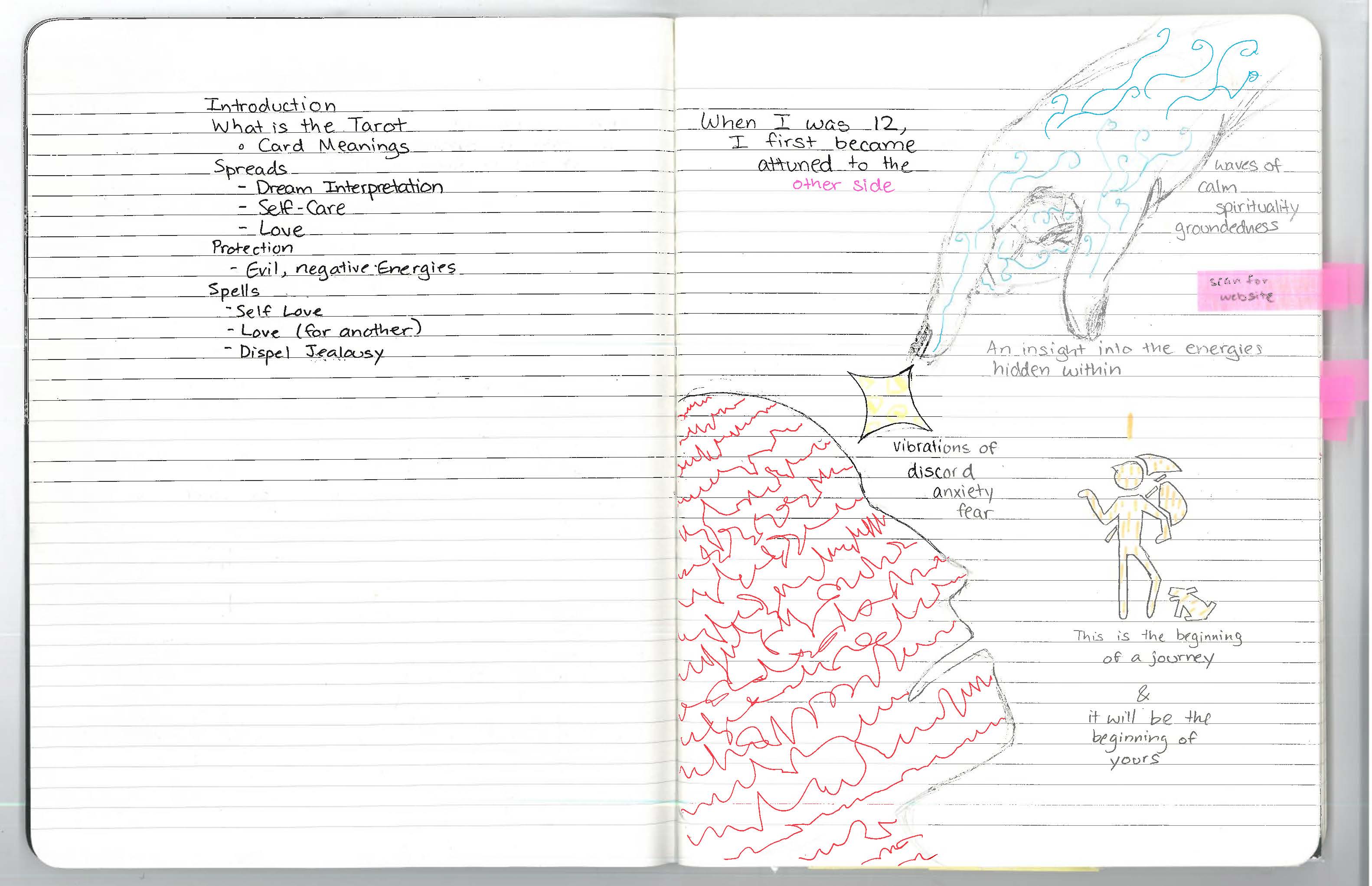 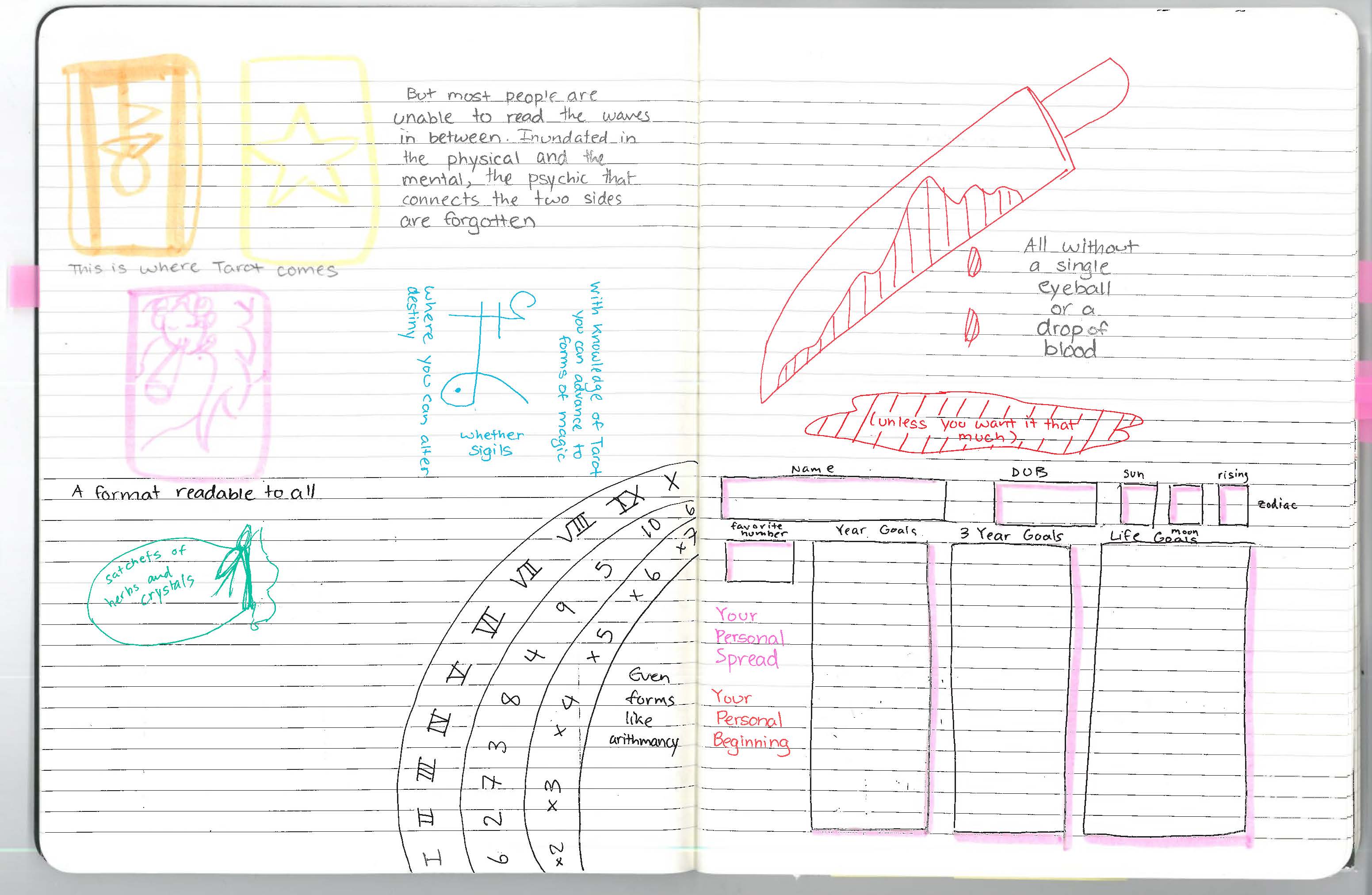 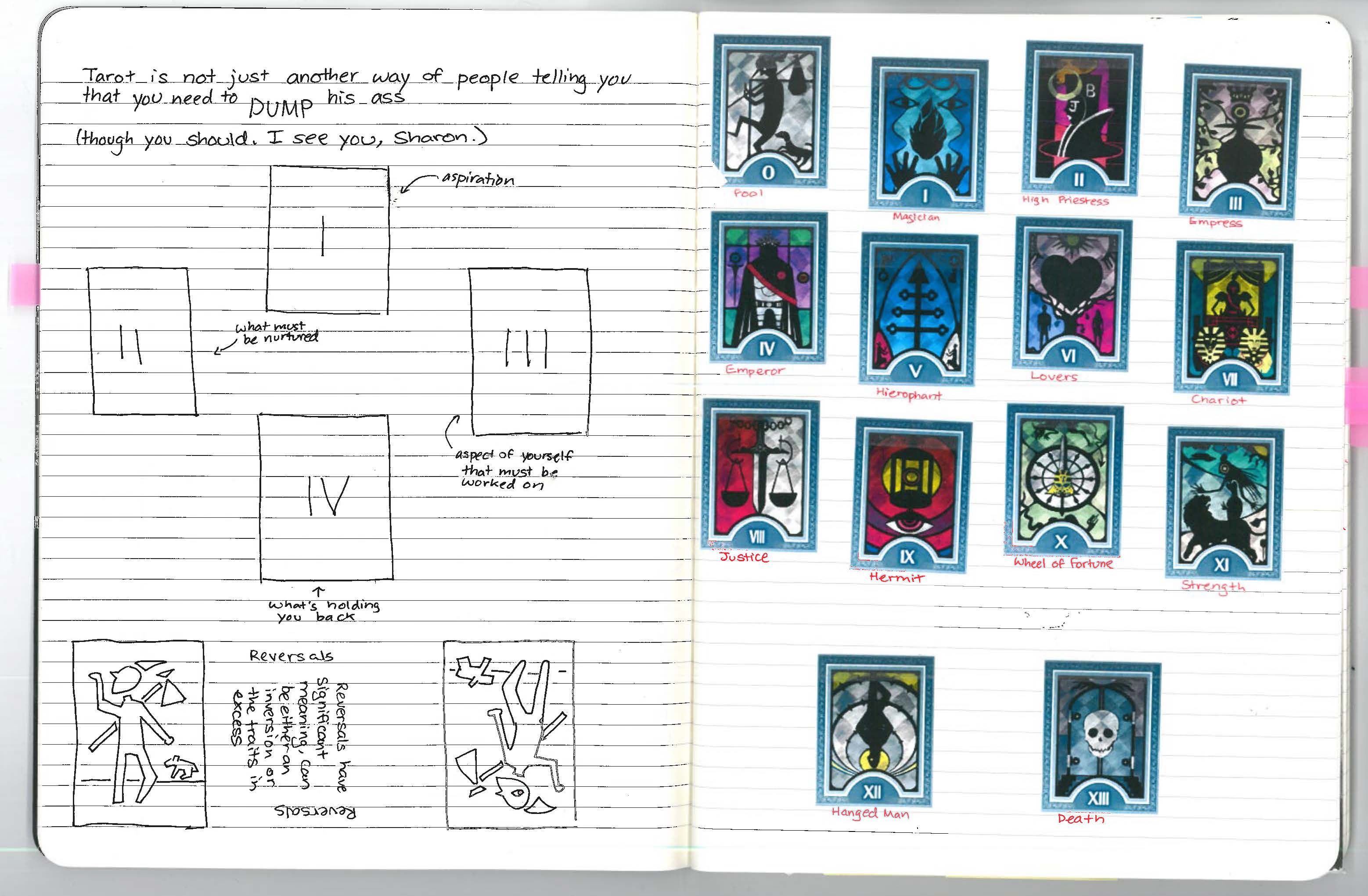 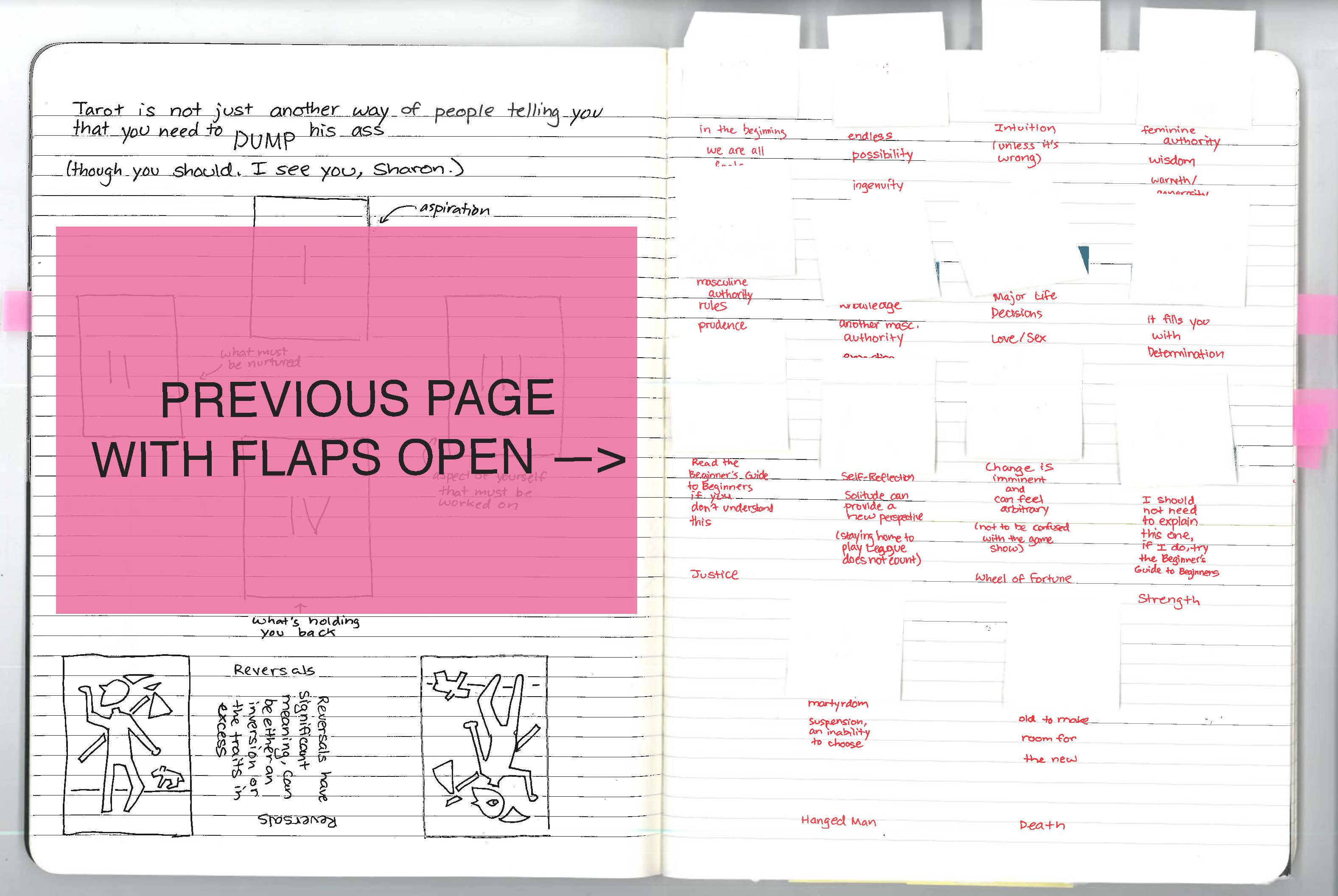 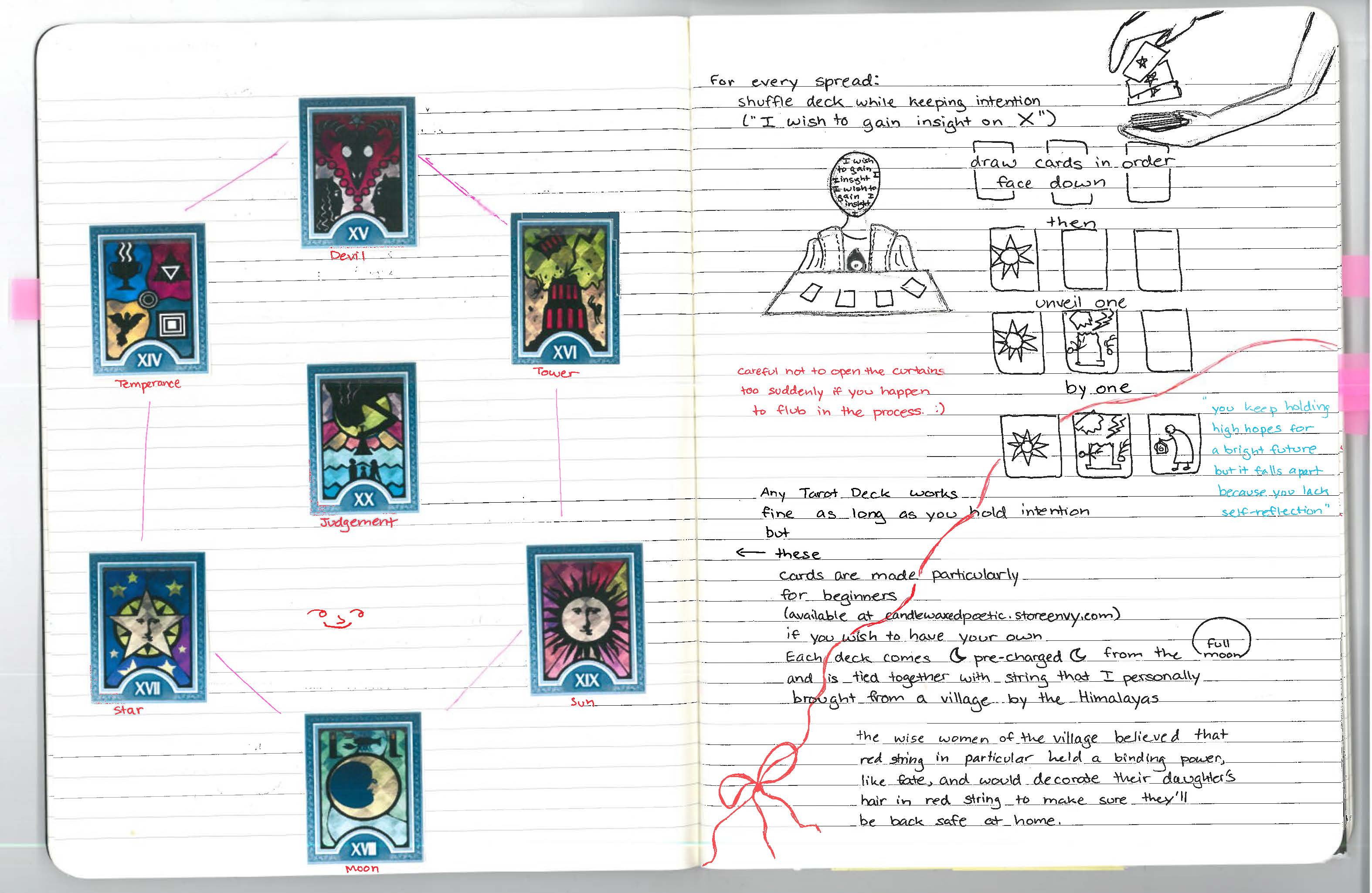 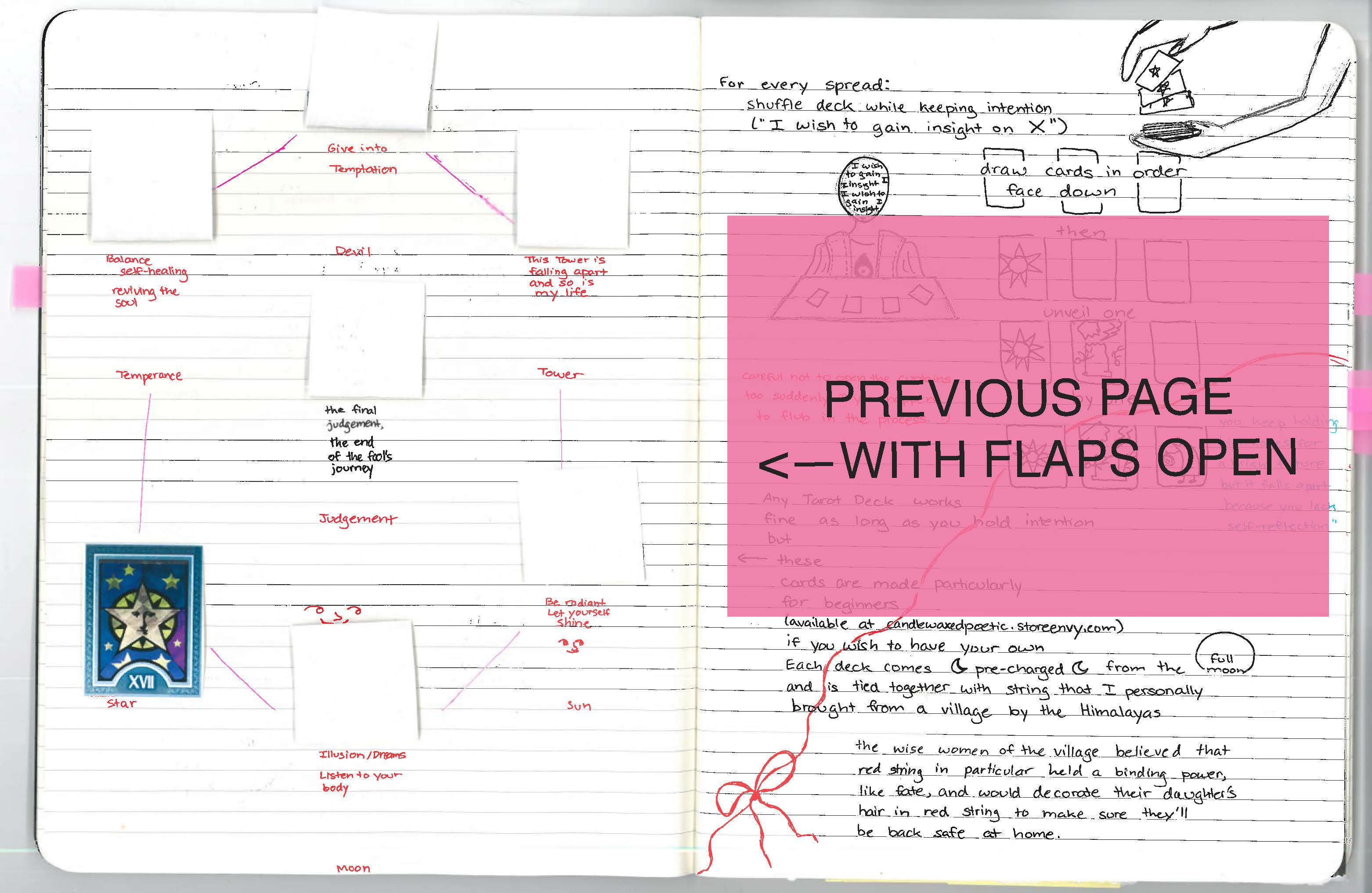 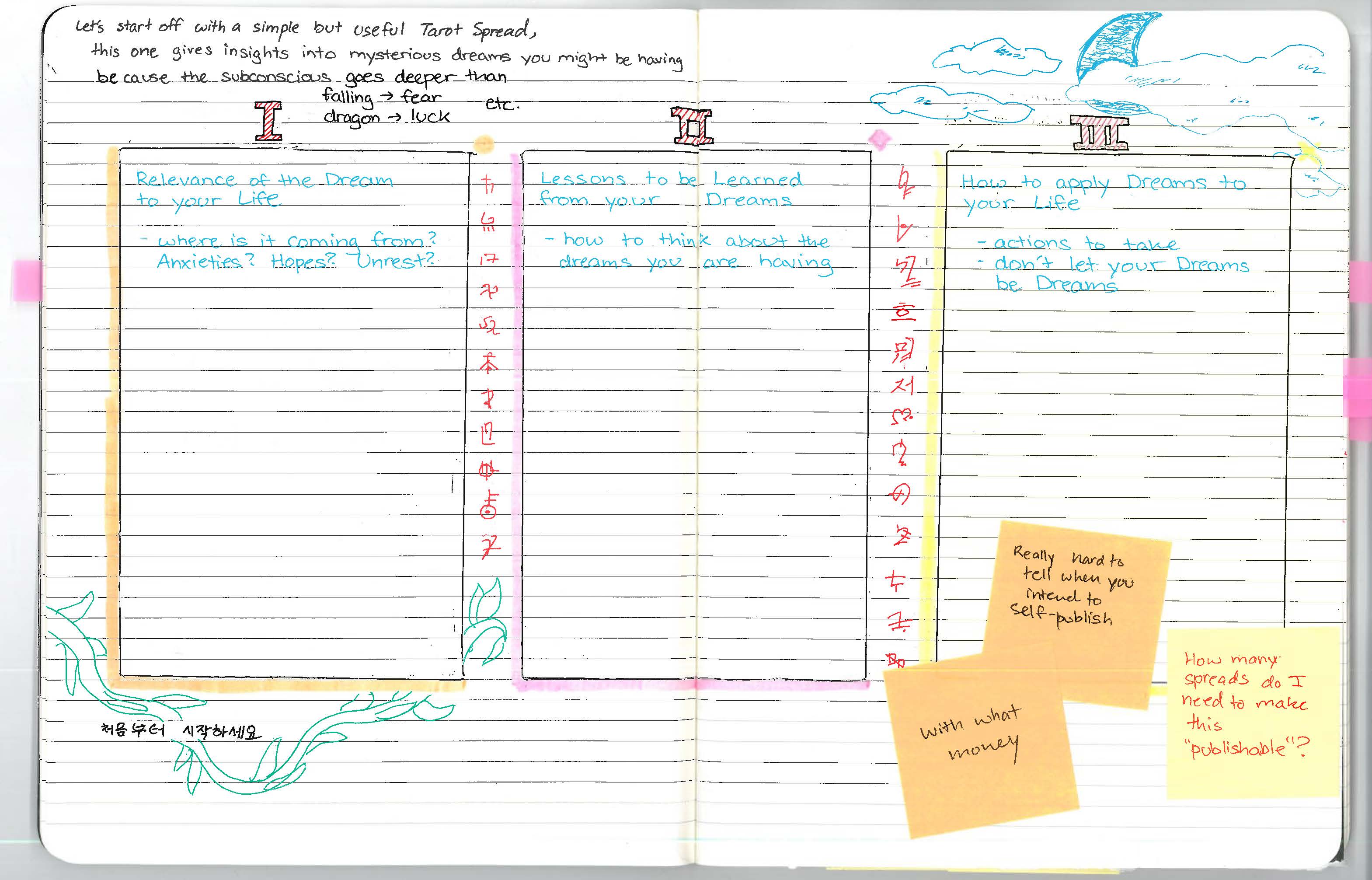 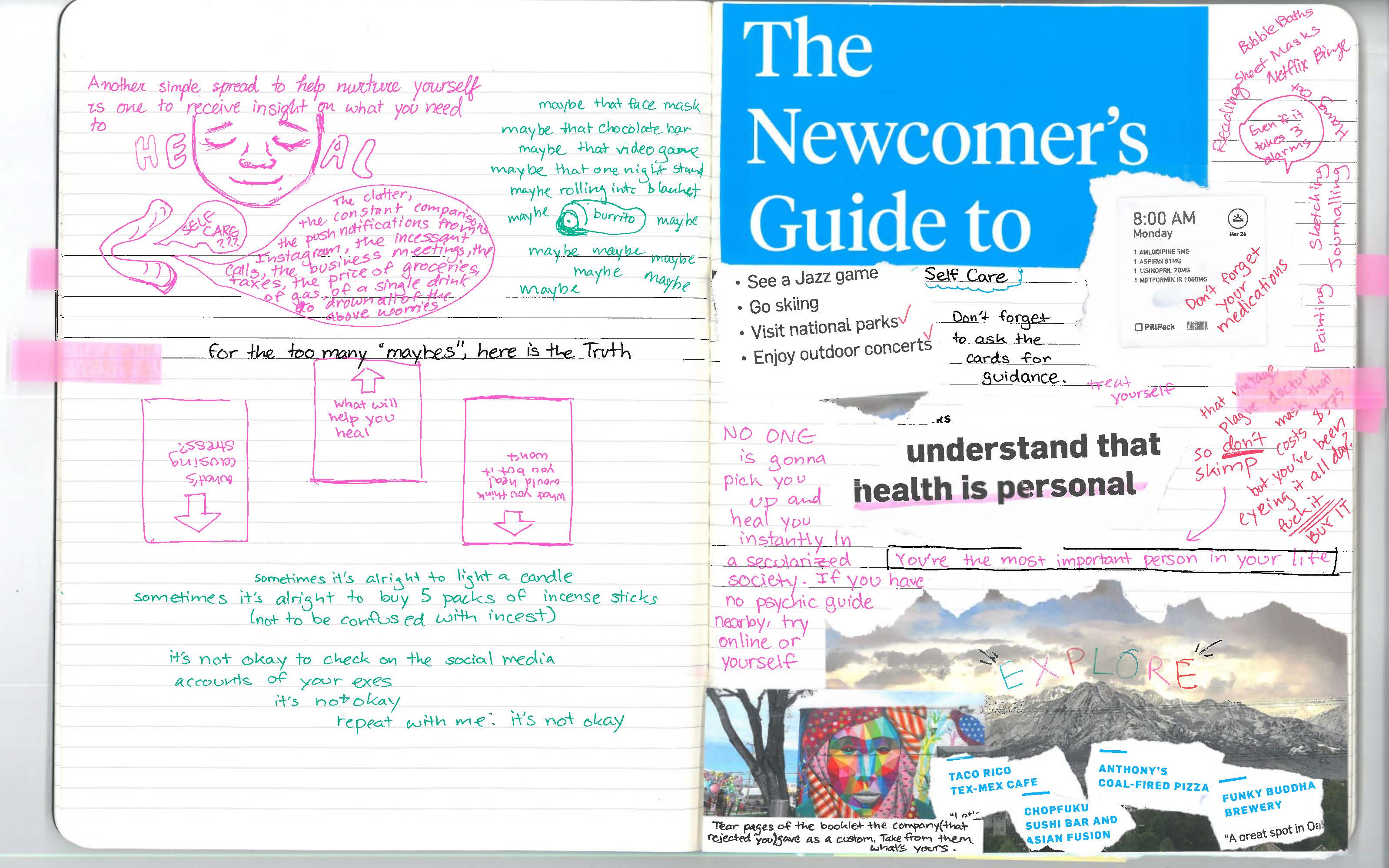 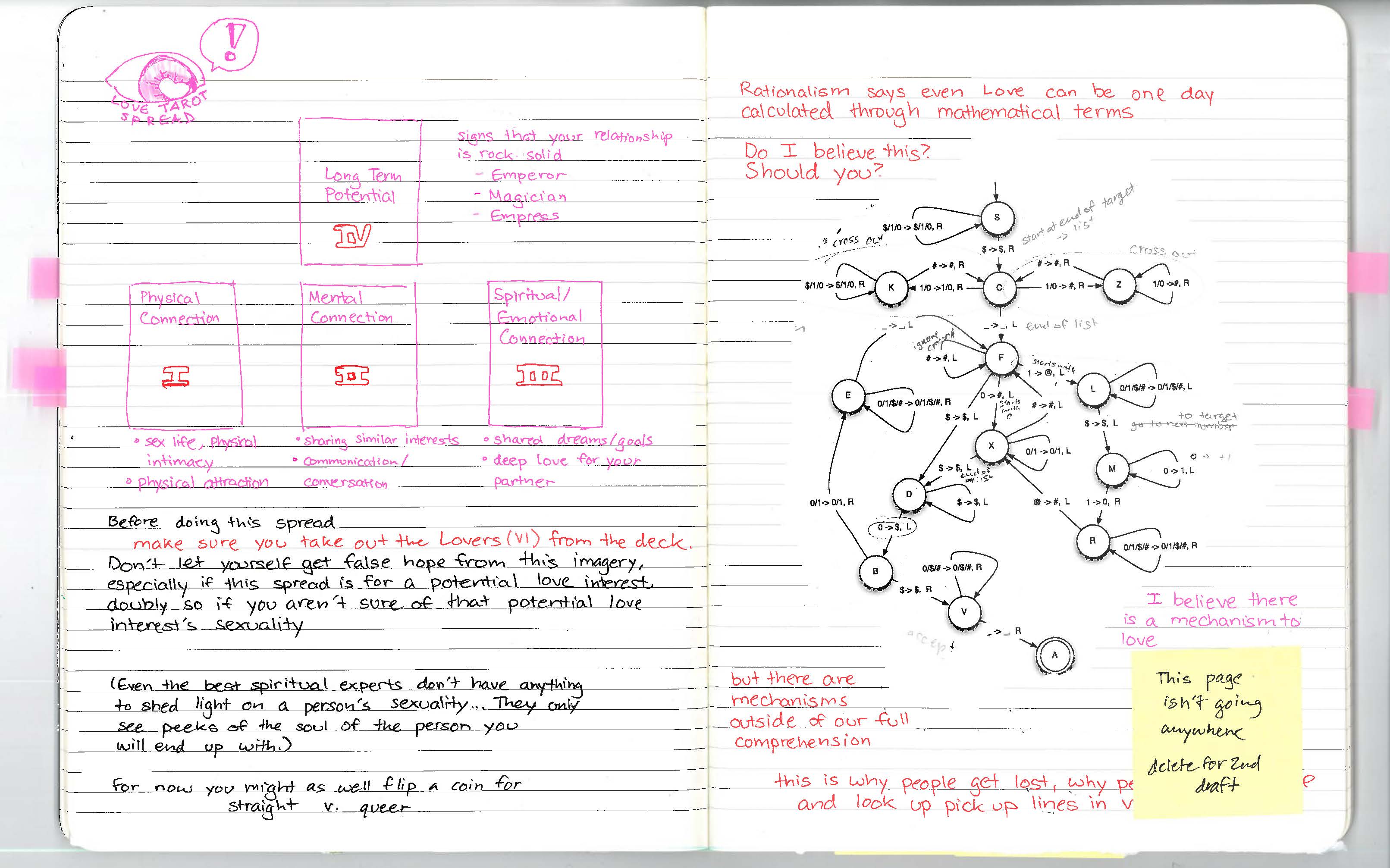 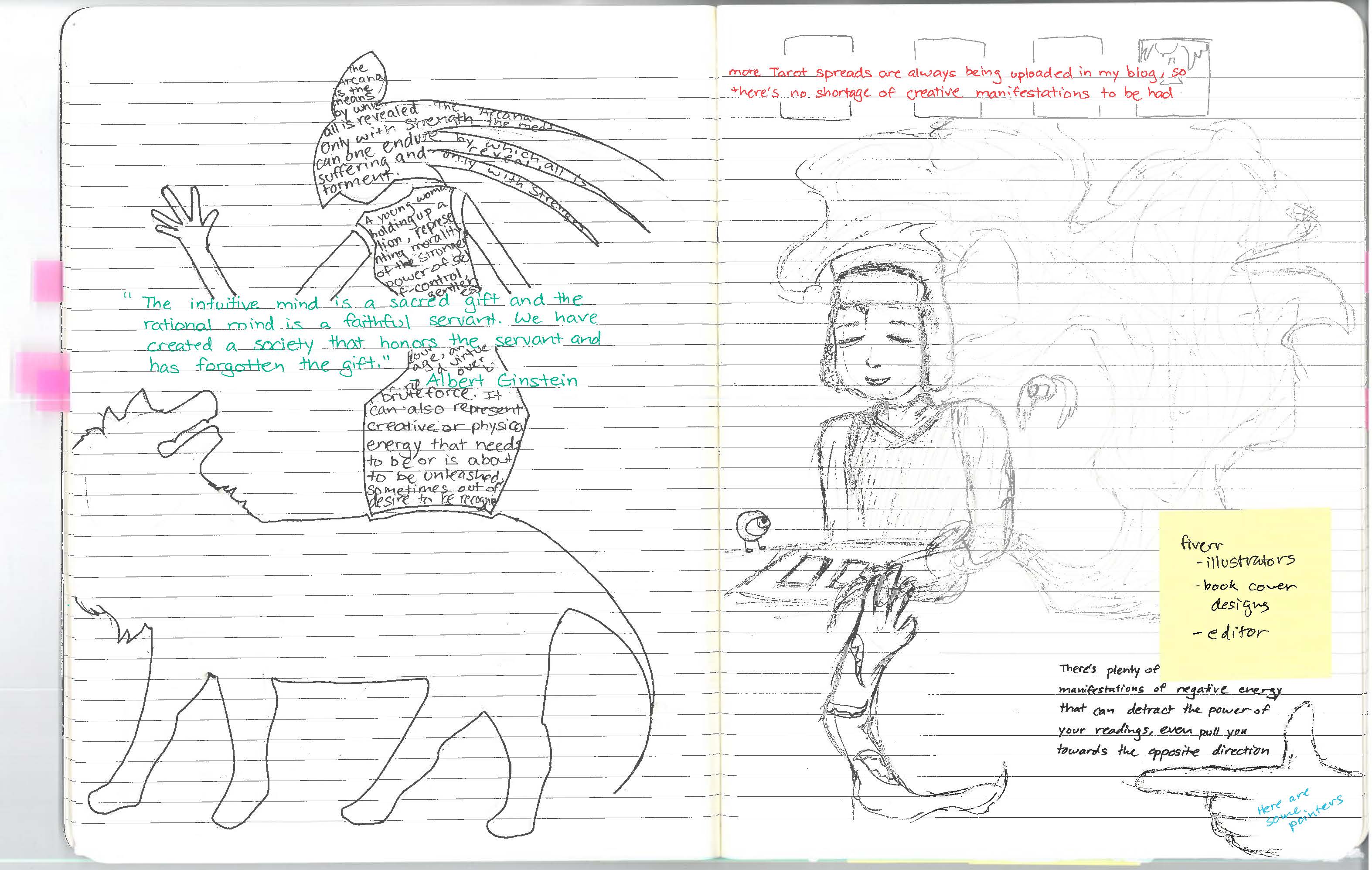 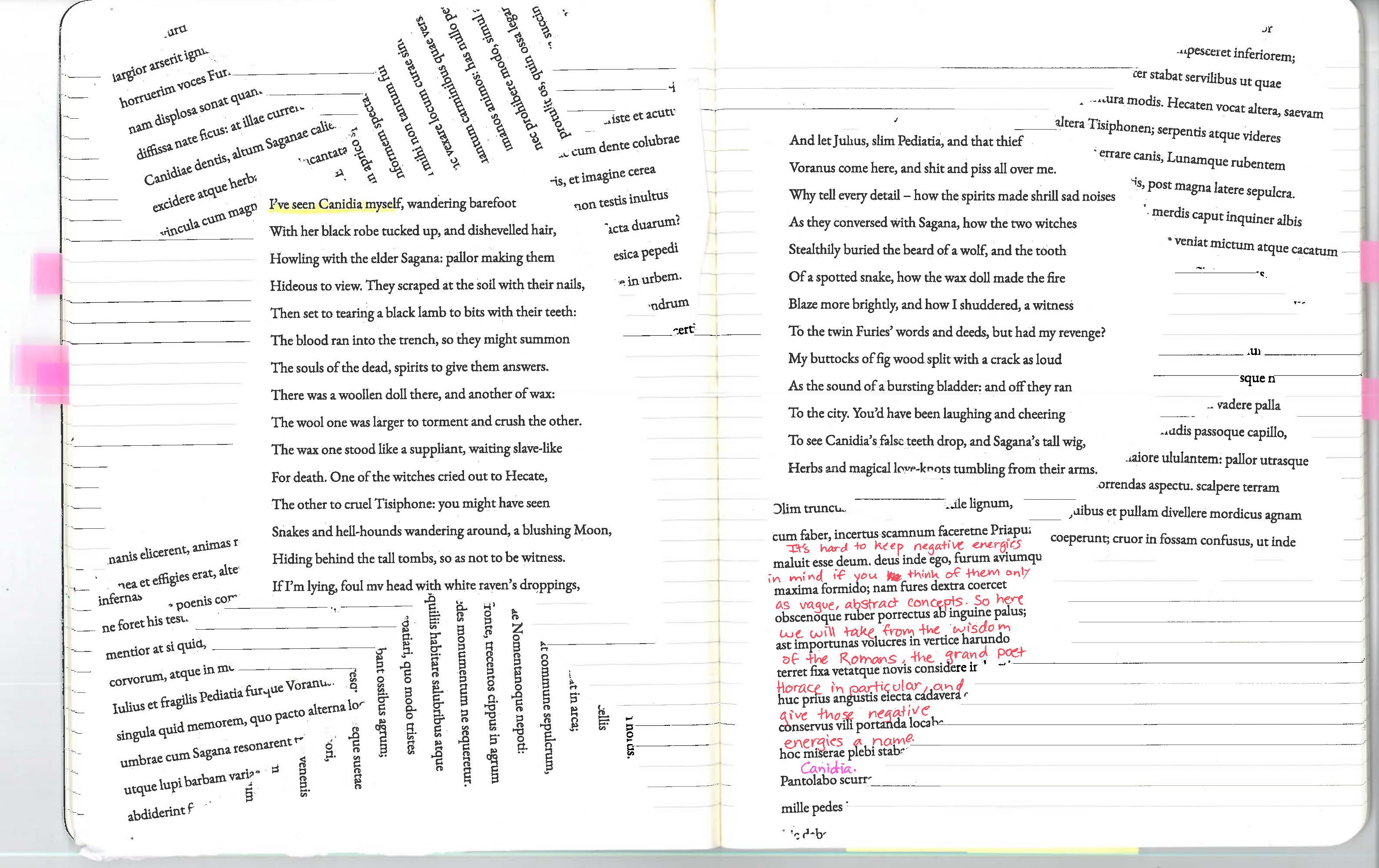 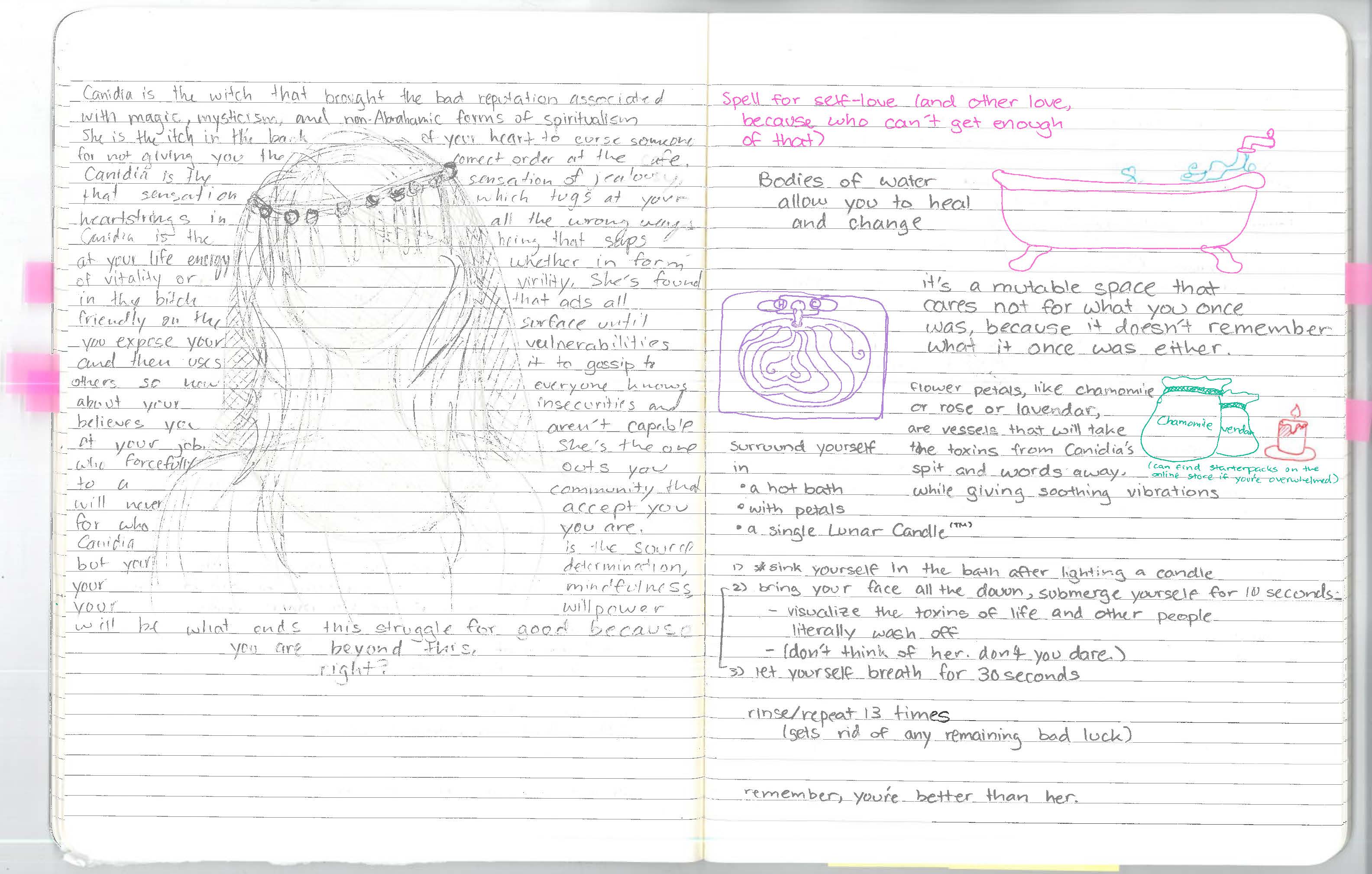 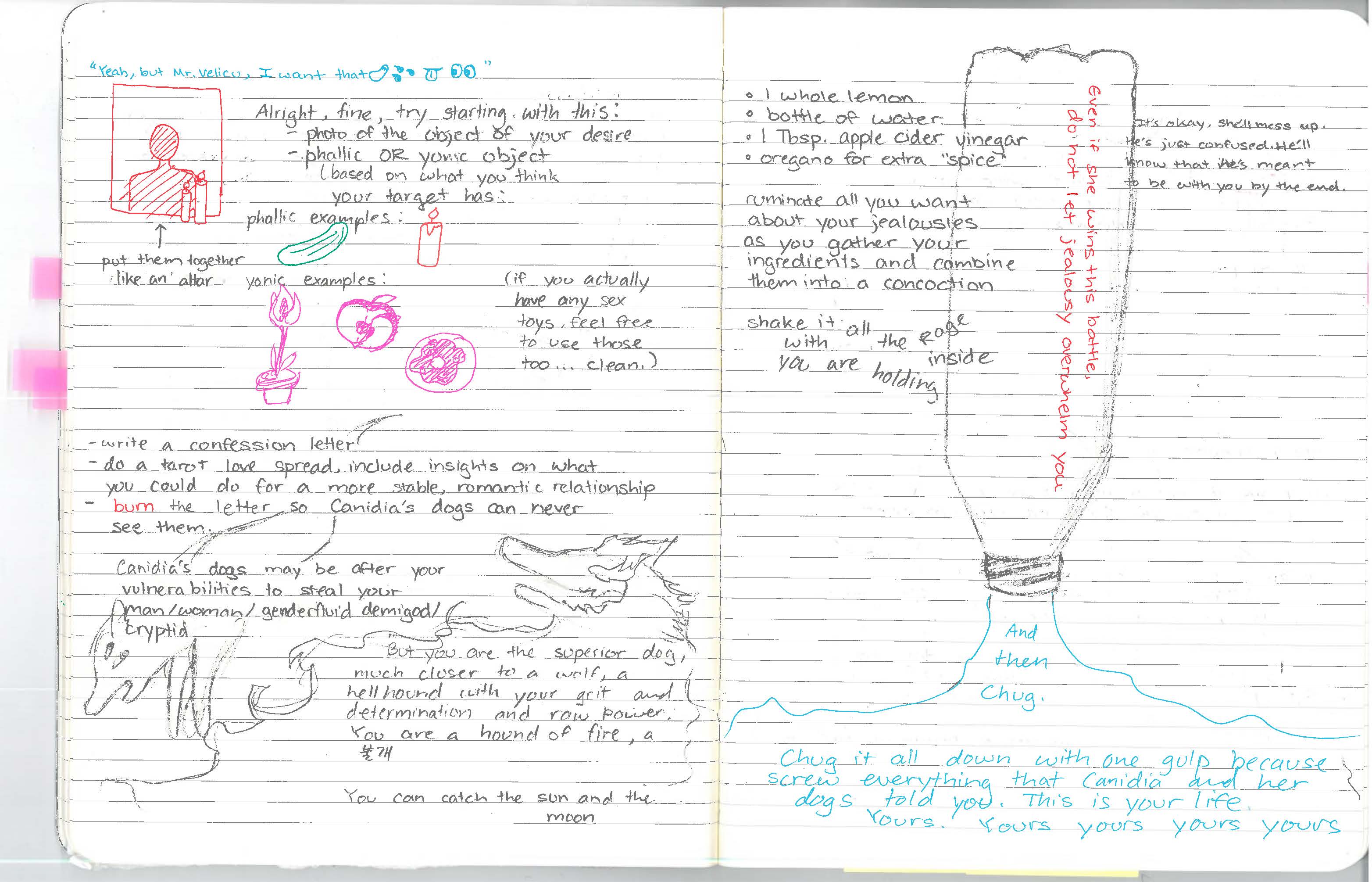 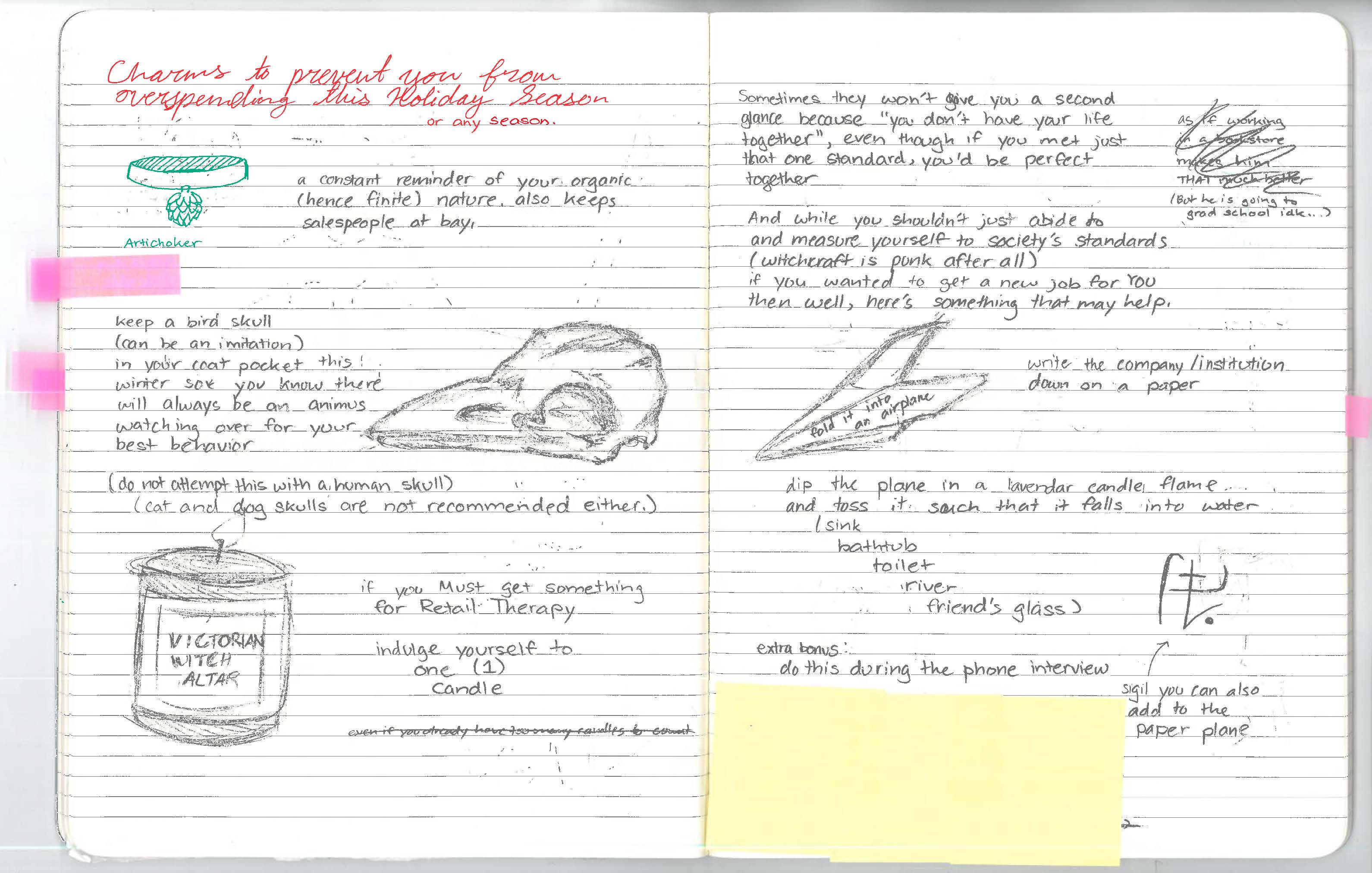 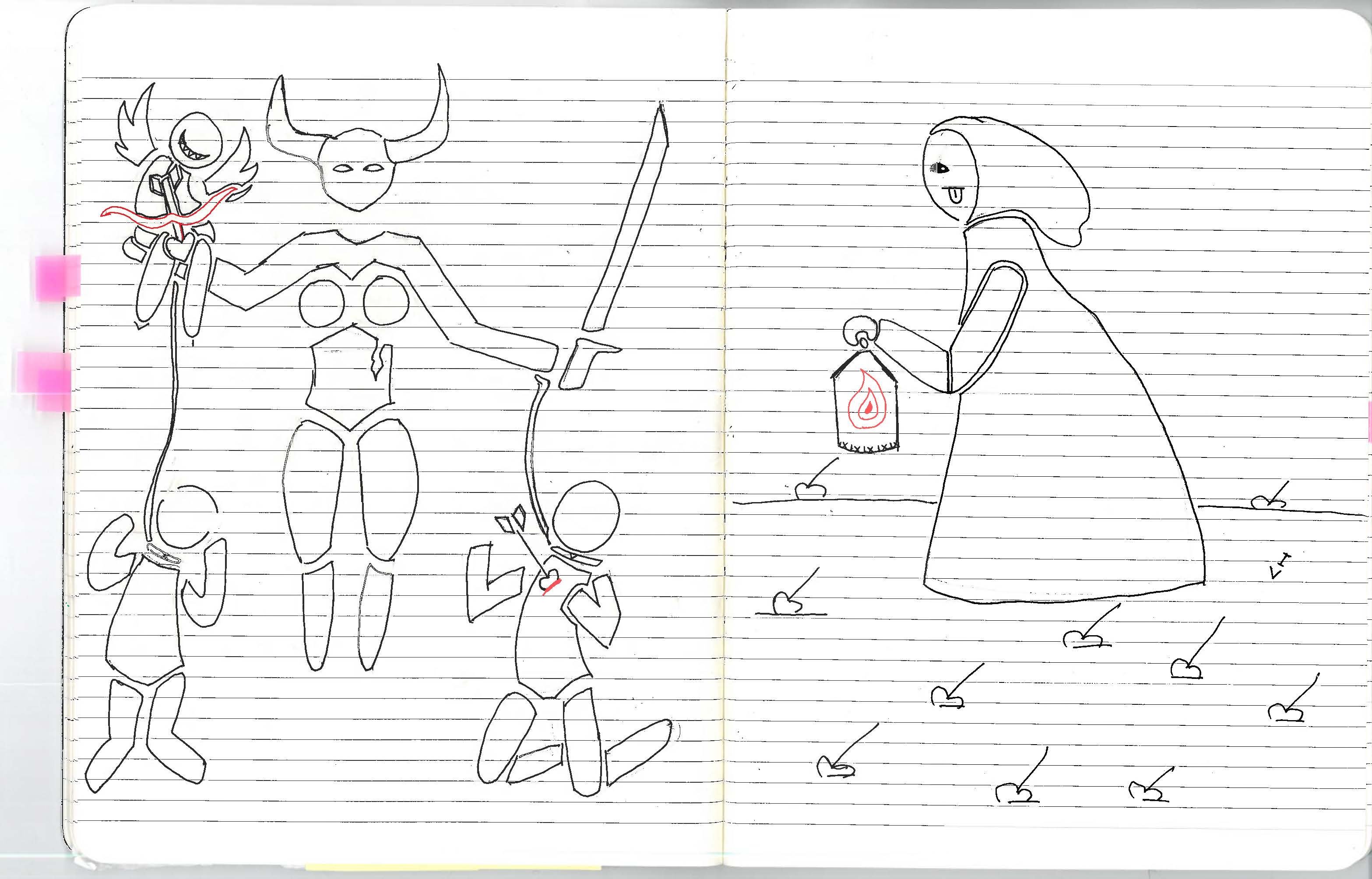 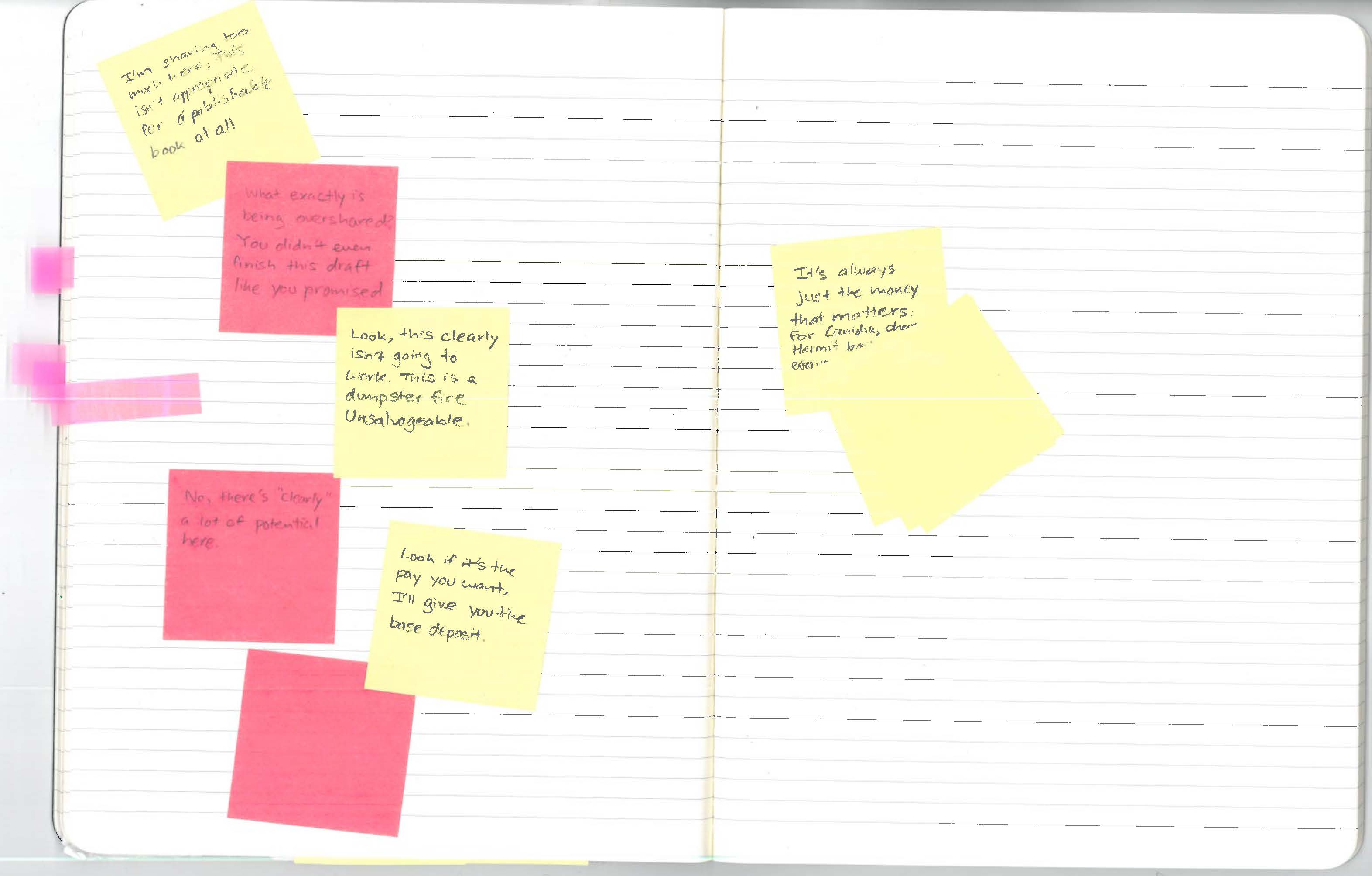 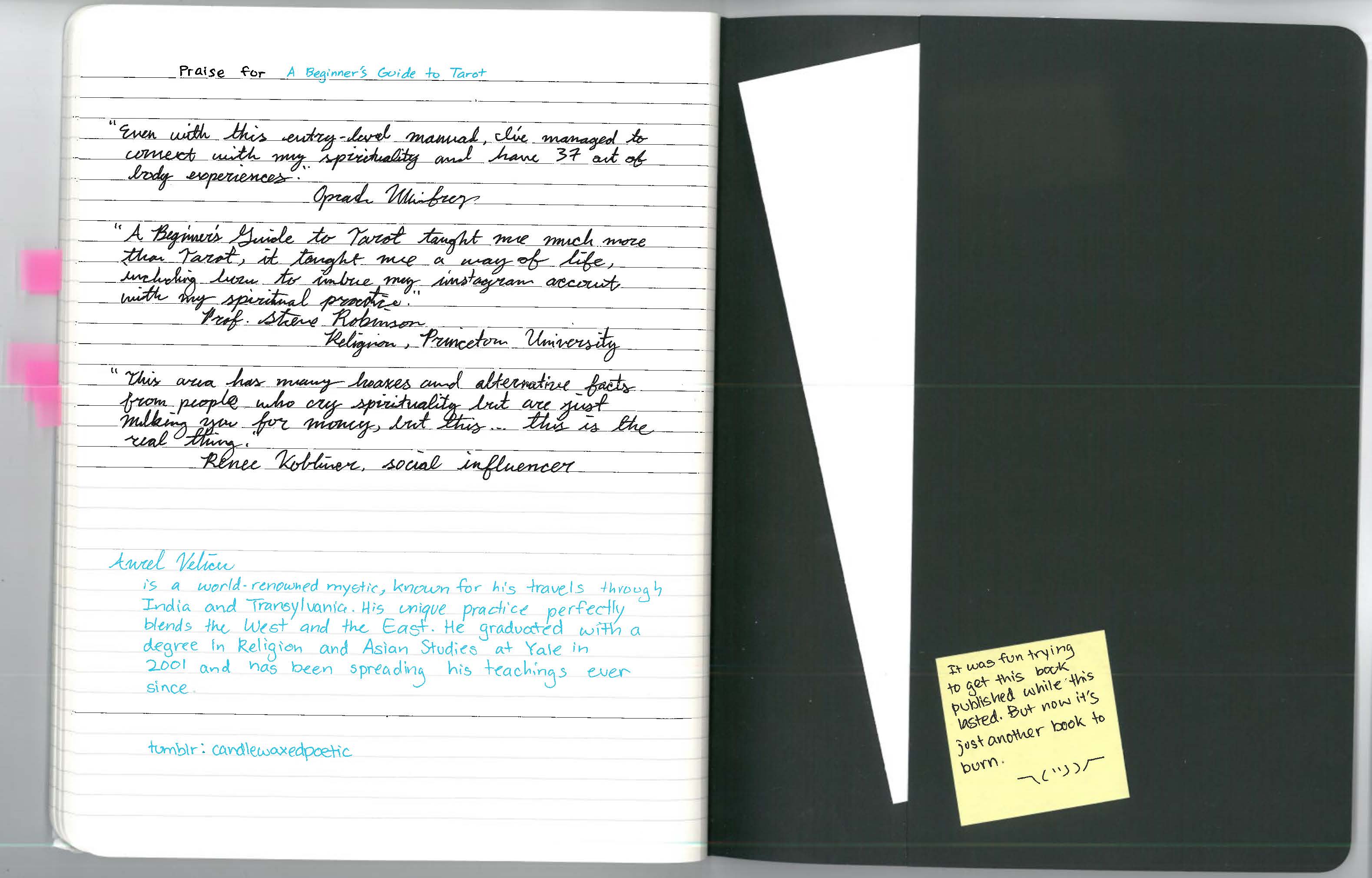 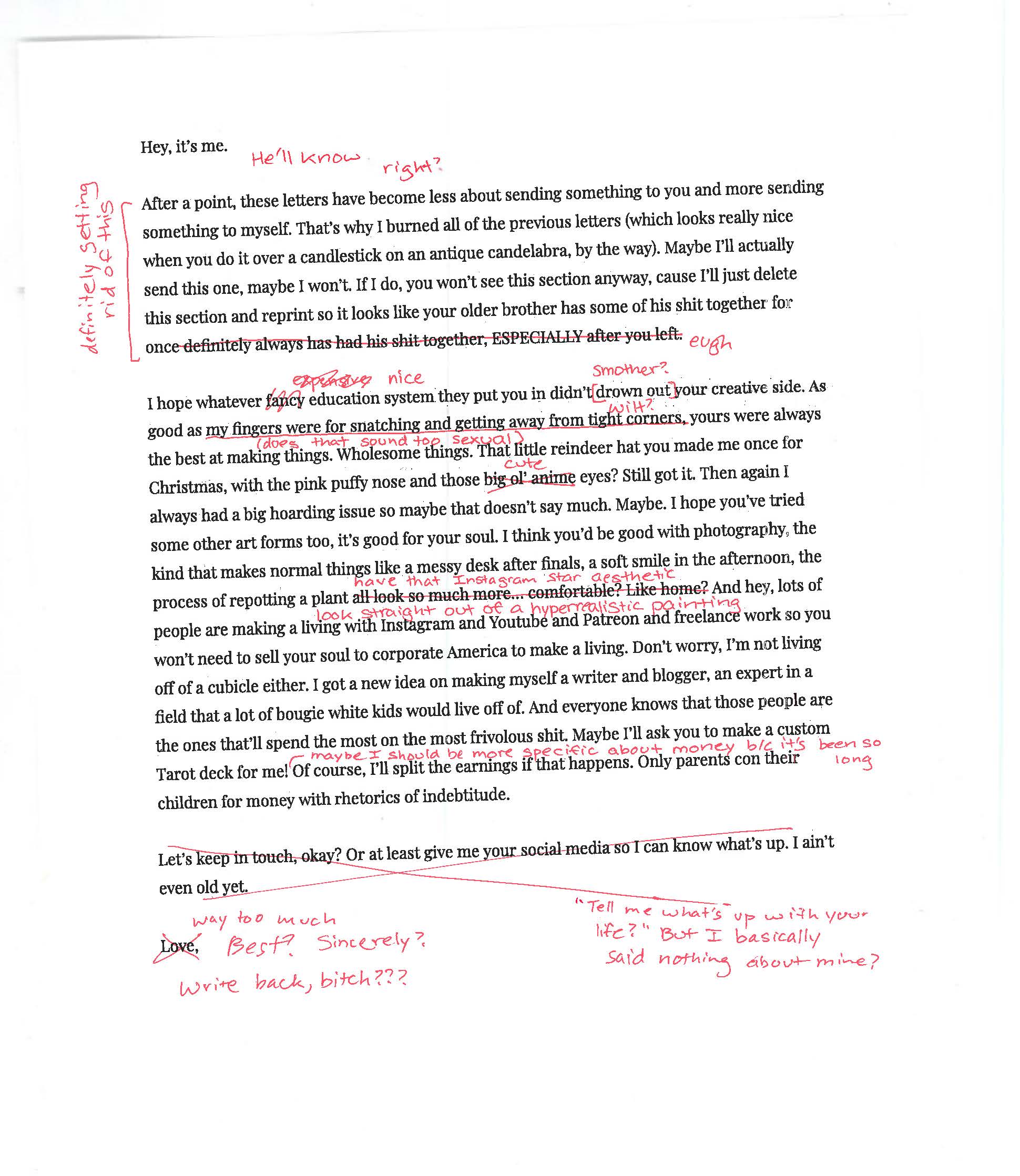