June 5, 2013
by Phoebe Cohen
Comments Off on A Geological History of Old Saybrook, CT

Growing up, I was surrounded on all sides by water.  I could swim in Long 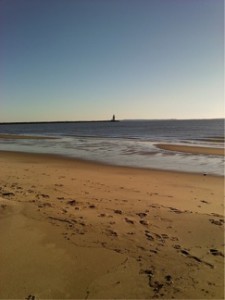 Was this coastline always there?  Or more importantly was this piece of land always here?  Here, there… over the course of Earth’s history so much movement rattled the continents that nothing stayed still for long.  Where has Old Saybrook been?

Since the formation of the earth, tectonic plates have been shifting, colliding, and crumbling.  Though the earth is estimated to be 4.54 billion years old, no sediment on its surface is nearly this old.  None of the earth’s oldest sediment is found in the New England area.  In fact, the sediments under Old Saybrook probably don’t date back further than 443 million years to the Silurian Period.  The continental plate that makes up North America today did not include present day New England until a series of exotic terranes, or small pieces of land from other areas “foreign” to the larger landmass, collided with it. 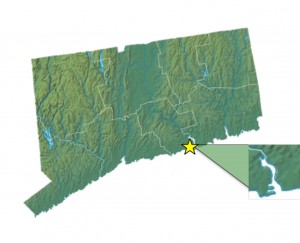 Old Saybrook lies on the Avalonian terrane, which accreted on to the North American continent through sea floor spreading and oceanic plate subduction.  When a continental tectonic plate and an oceanic tectonic plate meet, the oceanic plate is subducted, which means that it is sucked down and melted in the mantle.  These plates collide because of the force of sea floor spreading from magma flowing out from the mantle to form new crust near ocean trenches.  Avalonia was probably originally a volcanic island composed of igneous rocks that metamorphosed when it accreted because of the extreme pressure over millions of years.  Today Old Saybrook is made up of gneiss from these metamorphosed igneous rocks.  This continental accretion made up the Acadian orogeny and ended around the Devonian period[1].

Even after Old Saybrook’s formation and New England’s accretion, the land was nothing like it is today because of North America’s location just south of the equator.  This of course made the temperature much hotter, with just a dry and wet season.  To compound this, a global greenhouse period of increased temperatures began due to additional carbon dioxide in the atmosphere and the ocean’s low albedo (oceans absorb much more of the sun’s heat than they reflect and with more ocean water, the earth’s surface warms).  There were no ice caps at the poles and the resulting high sea level formed a shallow freshwater lake to the west of Old Saybrook.

Then as the continents converged in the Permian, Old Saybrook was squished between the North American continental plate and Gondwana (present day Africa, South America, Antarctica, and Australia) forming Pangaea.  Once Pangaea broke apart in the Jurassic period, Old Saybrook drifted up to where it is today in the northern hemisphere.  The rifting from the continental fragmentation caused major erosion and deposition of sediment in many parts of Connecticut.   These deposited sedimentary layers were able to preserve fossils in many parts of Connecticut neighboring Old Saybrook, but not in the Essex or Old Lyme Quandrangles (the geologic areas that encompass Old Saybrook). 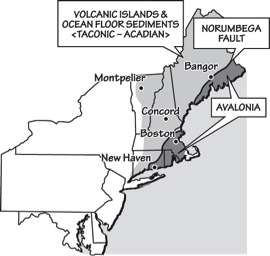 Old Saybrook is east of New Haven in Connecticut, making it part of Exotic Terrane Avalonia. From the Teacher Friendly Guide to the North East

The discovery of these Jurassic fossils prompted the creation of Dinosaur Park, which contains a surprisingly diverse and abundant amount of dinosaur trackways and evidence showing Triassic and Jurassic climates.  Pieces of evidence for the End Triassic Extinction and trace fossils (show movement and behavior rather than physiological structure) of therapods have been preserved here.  The extinction is “clearly indicated by the disappearance of typical Triassic pollen and spores”[2] from the fossil record in this area.  The dinosaur trackways have also been important in figuring out what kind of life was able to live in this area around 550,000 years after the End Triassic Extinction.  The tracks can tell us the shape and size of the dinosaurs’ feet characterized by distinct claw marks, and also the body size based on the distance between prints or the stride length.  It is evident that these were bipedal, meaning they walked on two feet, and their hips were probably six feet tall.  This is large for a therapod and could be due to a lack of competition after the widespread extinction.  There is evidence for the shallow body of water near Old Saybrook I mentioned above, along with numerous freshwater fauna well preserved in areas of low oxygen mud.  Though fossils could not be preserved in the igneous and metamorphosed rocks when this area formed, evidence from subsequent sedimentary rocks gives us a good idea of the climate and diversity of life in Southeastern Connecticut.

Today Old Saybrook’s economy is highly dependent on tourism, as the population doubles in the summer months.  During these times, beautiful wetlands and beaches draw people to Old Saybrook and the surrounding areas.  Today there is growing concern that erosion and rising sea level will destroy these fragile marine (ocean) and fluvial (river) ecosystems.  A recent study aimed to assess the damage that has been done by humans to these wetland systems.   Severe weather events, changing sediment supply, and river diversion all seem to be first indications of the possible further destruction by human forces.  The current changes in morphology (structure and features) of the Connecticut coast is minimal compared to the drastic changes that it has been through in the past.  However, changes today are occurring over the course of decades rather than millennia and pose a problem for industries and residents in these areas.  More and more people are looking for waterfront property, but these developments are damaging the remaining marshland and waterside habitats.

Today it is difficult to connect the geologic history of the rock and fossil record to the changes in our current landscapes because the short time scale we use to address current changes is vastly different from the long term changes recorded from the past.  Even so, communities like Old Saybrook, vulnerable to flooding, habitat loss, and economic instability, depend greatly on climatic and geological changes, making it worth the time and effort to consider these interconnections.

March 18, 2013
by Phoebe Cohen
Comments Off on A Brief Geologic History of Milford, New Hampshire

Growing up in the small town of Milford, New Hampshire, would have been quite boring if I didn’t have a car. Even the largest attraction Milford has, the town drive-in theatre, obviously required a car. But when the drive-in theatre was closed or showing terrible films, which it often was, I turned to Routes 101 and 101A. These roads gave bored teens—licensed bored teens, that is—a chance to escape to the larger city of Nashua within a half an hour’s drive. But unbeknownst to most driving to and from Milford are the geologic stories the exit ramps tell. 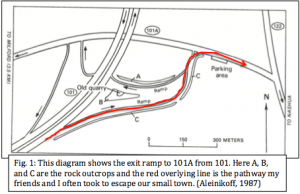 As you drive off of Route 101 to merge onto 101A, you pass between two rock outcrops of significant height (ranging from 3 meters to 15 meters) on either side

(see Figure 1 and Figure 1A). Besides noticing the beautiful icicles that form from water seeping through the rocks during the winter months, I never paid much attention to these outcrops, and drove past like most people would, listening to music or laughing with my friends on the way to the mall.

But now that I’ve been a student at Williams College for almost a year and a half (Williamstown makes Milford feel like Boston), and now that I’ve taken a few geoscience courses, those outcrops seem much more interesting. After some basic geologic research, I discovered 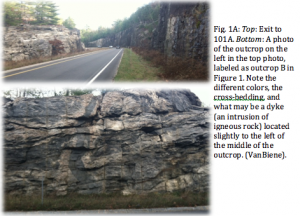 that Milford rests on two different types of bedrock—Permian Granite and the Massabesic Gneiss Complex (see Figure 2). And as it turns out, the outcrops on either side of the exit leading to 101A represent both types, consisting of Massabesic Gneiss with intrusions of Permian Granite (Aleinikoff, 1987). An intrusion, or pluton, forms when hot molten rock rises from the mantle of the Earth and ‘intrudes’ on the crust. This hot magma then cools, forming igneous rocks like granite.  The granite in Milford is named after the Permian geologic period, from about 299 million years ago to 251 million years ago, because that is when it formed. A plausible cause for the granite’s formation is continental accretion, more specifically the collision of modern day Africa with modern day North America during the Permian (Kullerud, 2003). 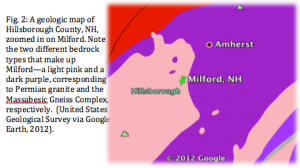 Before the African continent collided with the North American continent, however, the ocean separating the two had to close, meaning that oceanic crust (which lies lower than continental crust) was forced underneath North America. As the plate was pushed, or subducted, underneath the North American continent, the heat from the earth’s mantle melted the oceanic crust, lowering the density of the rock and causing it to rise (Figure 3).  This probably caused the intrusion of the Permian Granite (an example can be seen in Figure 1A).  This granite has historically been important to the average Milford townsperson, as granite quarries are found sporadically throughout the town (Figure 1 shows an abandoned quarry).

But for a geologist, the Massabesic Gneiss Complex (MGC) is much more interesting. It is much older than the Permian Granite, and has been dated back to about 625 million years old (Dorais, 2001). Because of the pressure of the collision between the North American and African continents in the Permian, the rock already on the continents, like the MGC, changed. Under high temperatures or, in this case, high pressures, rock is altered. Thus the collision of the two continents created high pressures that altered, or metamorphosed, the Massabesic Gneiss Complex. While the cause of metamorphism is somewhat clear, why a rock dating back 625 million years is sitting in New Hampshire amongst Permian aged granite remains a mystery. The complex appears in a very small area of Hillsborough County and its tectonic origins (where the rock actually came from) remain debatable (see Figure 4) (Aleinikoff, 1987).  One theory suggests the MGC was exposed as a result of the crust bending under pressure from both sides, lifting the MGC up and exposing the rock to the surface. This process creates a structure known as an anticlinorium. Perhaps as the African continent collided with North America in the Permian, the immense pressure forced the crust to bend and pushed the MGC (of Late Proterozoic age) up. 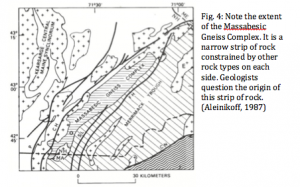 Another theory, proposed by Michael Dorais et al, suggests the MGC is one of three exposures of the Avalon terrane a significant distance from the coast in New England (Dorais, 2001). An exotic terrane is a micro-continent that accretes  to a larger continental land mass. Avalon, originally from the African continental landmass, collided with North America at some point within the Devonian to the Ordovician geologic time periods (from about 360 million years ago to about 500 million years ago), before Africa itself collided with North America.

But while the origins of the MGC remain unclear, one thing is certain: despite Milford’s lack of amusing things to do on a Saturday night, my small hometown is actually geologically intriguing. Now when I drive in between the rock outcrops on the way to Nashua and try to examine the evidence of continental collisions while driving at 40 miles per hour, I have to be careful not to get into a collision of my own.

Ansley, J. E. (2000). Geologic History. The Teacher-Friendly Guide to the Geology of the Northeastern U.S. (24) , 3-25. The Paleontological Research Institution.