Sone NSF-linked observations of the 2017 eclipse

The Williams College Eclipse Expedition was in Salem, Oregon, for the total solar eclipse that occurred on August 21, 2017. The following are a selection of composites and raw images from the eclipse team.

Images and Composites by David Sliski: 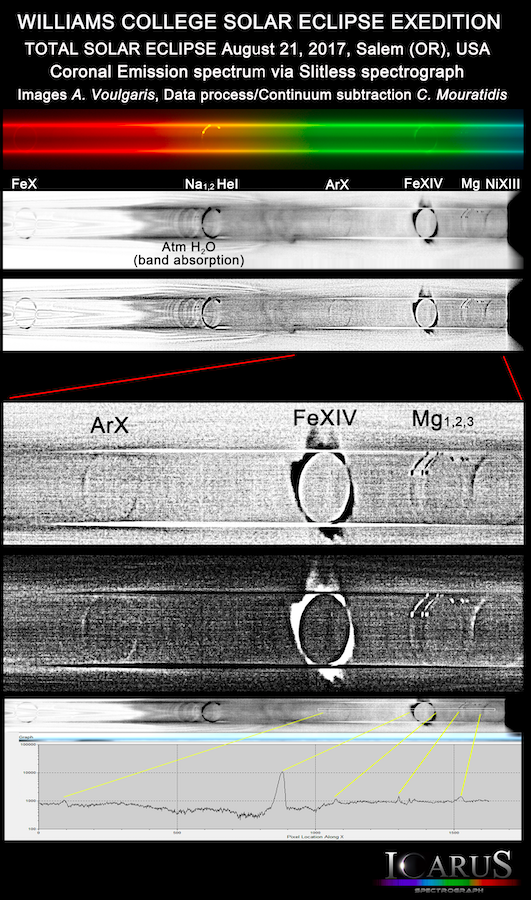 Spectra Taken at the Great American Eclipse by Aris Voulgaris: 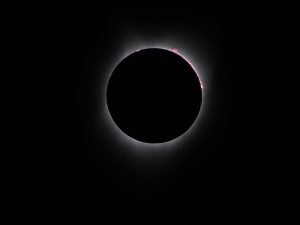 Wide-Field Image Taken at Salem, Oregon, with an iPhone by Deborah Popper

Students and Alumni present at The Great American Eclipse in Salem, Oregon: 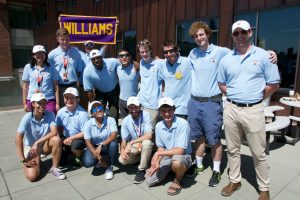 (Not shown, at our alternative site in Salem, Tim Nagle-mcNaughton ‘ 18 and Suranjit Tilakawardane ’07) 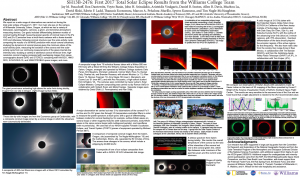 Various Websites to Prepare You For the Eclipse!

How to Get Kids Excited About the Great American Eclipse

The First Solar Eclipse in 99 Years is Coming. To Some, It’s an Act of God

Total Solar Eclipses in the USA

Will the 2017 Eclipse Prove the Sun is Bigger Than We Think?

The Sky Event of the Decade—Video Available

Aerial photo of the eclipse by Jon Carmichael

For the tours led by Prof. Pasachoff

A survey about the public’s watching the eclipse

The 2017 total solar eclipse spurred a flurry of interest about solar eclipses, according to the final report of a survey led by the University of Michigan.

A follow-up survey of American adults who viewed the August 2017 total solar eclipse showed that the eclipse drove people to gather information about 16 times in the three months following the event. This level of adult information-seeking after an event is higher than previously reported for any similar scientific event. The eclipse fostered a good deal of conversation, with the average adult reporting eight conversations with other people about the eclipse or related scientific issues.

“What we found was that there was a substantial amount of people going online, going to libraries, talking to their friends, trying to figure out what was going to happen with the eclipse before and after the event,” said Jon Miller, director of the International Center for the Advancement of Scientific Literacy at U-M’s Institute for Social Research. “To a large extent, scholars have watched what people do before a scientific event, but not what they do after. The event can be a stimulus that causes people to look for more information.”

In partnership with NASA, Miller leads a national study that examines Americans’ scientific literacy and how they seek scientific information. In a typical year, his research team administers two waves of surveys: one at the beginning of the year and one at the end. Because of the total solar eclipse — the first in North America in nearly a century — Miller added another survey just weeks after the August 2017 event in order to capture people’s experiences as they were fresh.

Miller’s final report confirms that 88 percent of American adults viewed the total solar eclipse directly or electronically. This audience of 216 million adults ages 18 and older is one of the largest recorded for any scientific, athletic or entertainment event.

Twenty-one million adults who traveled to a different location to view the eclipse reported an average of 24 information-seeking activities during the two months prior to the eclipse. These viewers were usually seeking a higher degree of totality. An additional 62 million American adults viewed the eclipse electronically on television, a computer screen, a tablet or their smartphone.

Talking with friends and family and sharing information about the forthcoming eclipse was the most common information-seeking activity, followed by reading a story either in print or online in a newspaper or magazine.

American adults who viewed the eclipse reported an average of two online searches for eclipse-related information during the two months prior to the event. Those who viewed the eclipse used a combination of solar glasses designed to allow the direct viewing of the Sun and various other devices — pinhole projectors, for example.

“This level of public interest and information seeking about a science-oriented event is unparalleled,” Miller said. “It suggests that groups and organizations interested in fostering increased adult interest in science should think about post-event programming to provide resources and a forum for these discussions.”

Miller’s survey — beginning on the evening of the eclipse and continuing for a week after the event — found that most adults viewed the eclipse with other their family, friends or co-workers. Only 3 percent viewed the eclipse as a part of an organized group. Miller noted that this was not unexpected since the eclipse occurred midday on a normal work day.

The 2017 Michigan Scientific Literacy Study is based on a national probability sample of U.S. households from a U.S. Postal Service listing of all occupied households. The data were collected by AmeriSpeak, a panel service operated by the National Opinion Research Center at the University of Chicago.

No Shadow of a Doubt: The 1919 Eclipse that Confirmed Einstein’s Theory of Relativity (Princeton University Press, 2019)