Espenak map from his NASA site

Observations from Yurgamysh, Siberia, by M. N. Gnevyshev of the Astronomical Observatory in Leningrad with a camera sent by D. H. Menzel and J. M. Pasachoff from the Harvard College Observatory and the Smithsonian Astrophysical Observatory.

The camera was used to photograph the corona through a polarizing filter at four different angles: 30°, 75°, 120°, and 165° east of north (counterclockwise). The lens was lent by J. G. Baker at Harvard while L. Wier assisted Menzel and Pasachoff in the eclipse telescope’s design. It was constructed by Nicholas Cardoos in the Harvard Observatory’s model shop.

From the Solar Eclipse Newsletter:

September 22, 1968: This Eclipse has been successfully observed in Western Siberia. A number of outstanding Eclipse observers have attended the site of observation (Yurgamysh, Siberia): M. Waldmeier, J. Houtgast, M. Laffineur, G. M. Nikolsky, M. N. Gnevyshev, and S. K.Vsekhsvjatsky. Younger scientists also made observations there in; among those Serge Koutchmy and Rudolf Gulyaev.

Map of the Eclipse Path: 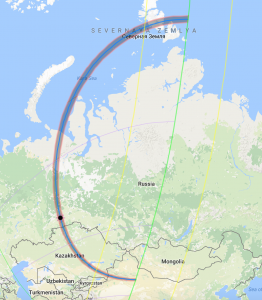